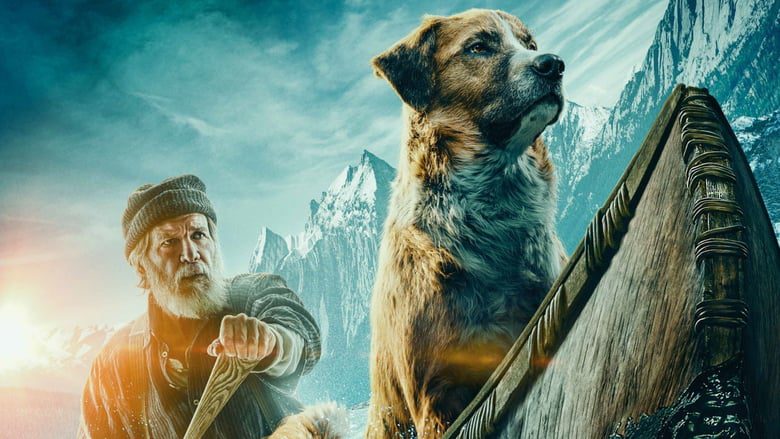 Buck is a family dog who is always in trouble, but when he is kidnapped, trouble finds him in the Alaska wilderness.  Buck’s is a remarkable dog story, based on the beloved novel The Call of the Wild by Jack London. What makes this movie remake of the charming story especially new and different is that the dog is 100% CGI! Director Chris Sanders made a digital scan of the animal shelter dog his wife adopted. It’s a cross between a St. Bernard and a Scotch Shepherd, the exact same mixed breed as the dog in Jack London’s book. This the live-action directorial debut of Chris Sanders. He previously directed the animated movies How to Train Your Dragon and Lilo and Stich.

The CGI of Buck, the dog, is extremely impressive…most of the time.  All of the other animals in the film are also CGI, including Timberwolves, a bear, deer, and rabbits.  There are some moments, however, when the CGI animals look super fake.  We’re so spoiled with technology, right?  The cinematography and green screen work are blended extremely well.  You’ll almost feel the warm sun on your face in some scenes and shiver in the snow in other ones as you visit Alaska and the Yukon territory.

The cast is relatively small but does a good job.  Omar Sy is likable and believable as a French sled-dog leader for a mail delivery service.  Who doesn’t love Harrison Ford?  Well, probably President Trump after Ford’s recent name-calling rant, as well as a bunch of people who were offended by it and are now boycotting the movie.

The idea of using illustrations at the very beginning to establish the setting was a nice touch, both to take us back in time and to give a respectful nod to the original novel.  You will see some beautiful nature and scenery.  You travel with Buck on his journey and see and feel what he does, including the gorgeous Northern Lights and fireflies.  Some of the scenes are absolutely breathtaking. It’s also fun to watch Buck experience snow for the first time, as well as other things along his adventure.

While Buck’s heart expands, so does the size of his body in some scenes.  Unfortunately, his CGI size isn’t consistent from scene to scene. He is also given a LOT of human emotions and behavior that aren’t quite correct for canines.  For example, somehow Buck understands the dangers of drinking alcohol, so he hides a bottle of alcohol from someone.  There are some details that aren’t accurate or make sense, so try not to let them bother you and you’ll enjoy the film.

Some very talented actors have small roles, such as Dan Stevens, who plays an over-the-top villain.  His wife is played by the talented Karen Gillan, who shows great athleticism in the movies Guardians of the Galaxy (Theatrical) and Jumanji: Welcome To The Jungle, but who sits motionless on a sled in most of her scenes.  Sadly, the movie doesn’t showcase all of their talents, which is disappointing.  Bradley Whitford does a great job with his few scenes.

There is some sadness to the movie too, something we all experience on our own journeys through this world.

Movie Review Mom:  Trina Boice teaches for BYU-I, is an author of 30 books, and a mother of 4 sons.  You can read more of her reviews at www.MovieReviewMom.com and see them on YouTube.  She coaches writers to become best-selling authors at www.FromBook2Business.com  You can hear her podcast “Daily Inspirational Quotes Hosted by Trina” on Amazon Echo devices and Volley FM.  She founded an online school and continues to create courses at www.LifelongLearningEducation.com  Because she is a popular speaker in China and loves to travel around the world, she created www.EmptyNestTravelHacker.com  You can see all of her books and win prizes at www.TrinasBooks.com  You can also find @TrinaBoice on Facebook, Instagram, Pinterest, and Twitter.

We are technologically spoiled! I hrew up on Ray Harryhausen and Disney. Look forward to watching with my family. On another note: why throw in the Trump rant? I stopped caring what actors said a long time ago. Their there to entertain.