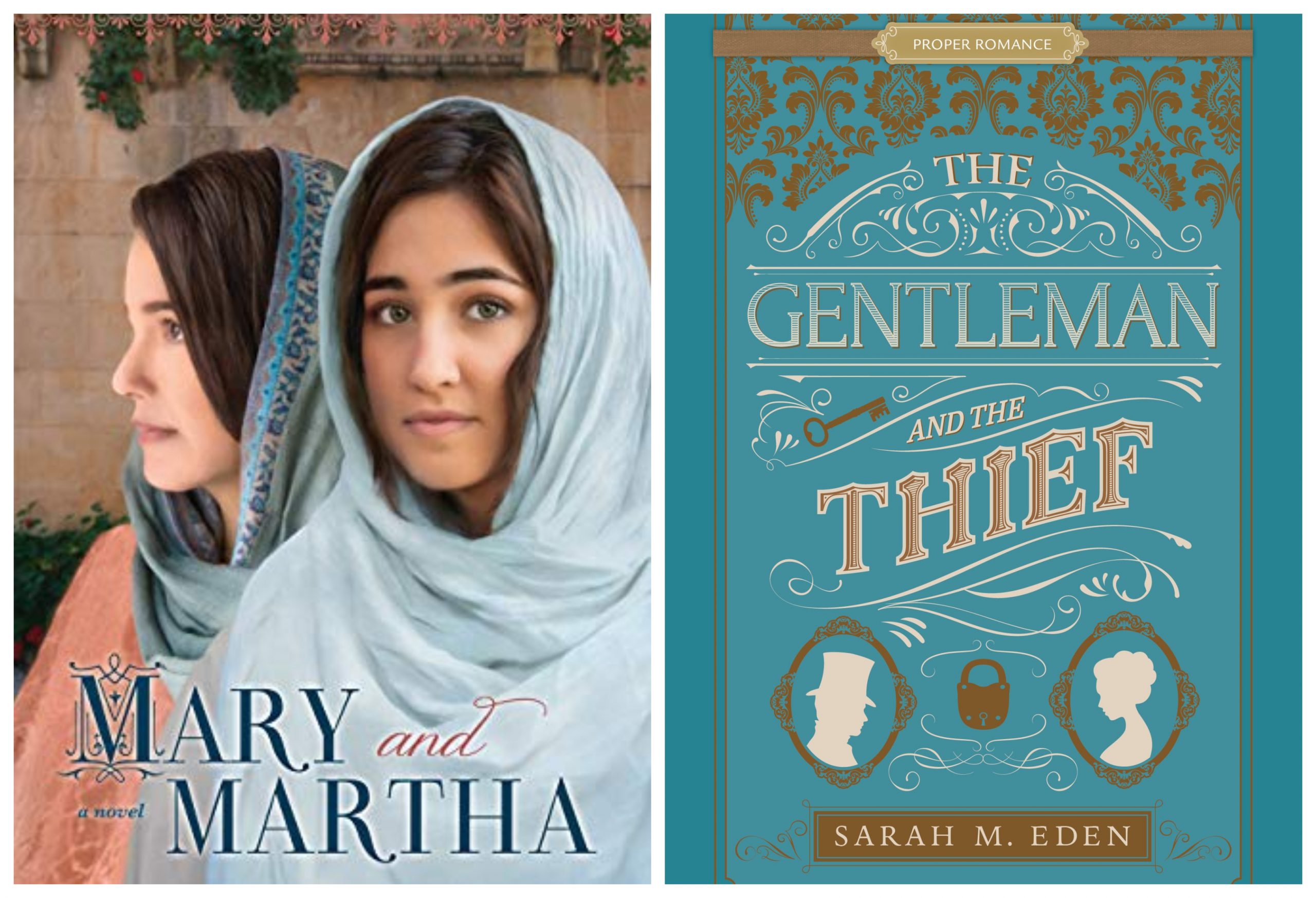 As Christmas week ends and a new year begins, it’s a good time to think of the many things we feel gratitude for. The past year has been filled with difficulties, but even among the difficulties there have been blessings, large and small. For me the pandemic has been a reminder that my grandmother was a midwife who served as the only medical help in the small country community where she lived during the great pandemic a hundred years ago. My father, a young boy drove her buggy and cared for her horse while she attended to the sick and dying. I’m grateful for modern hospitals and medical care patients have today, but I’m also grateful for the heritage of caring and sacrifice my father and grandmother passed down to my family.

In keeping with that theme I decided to review two books that struck me personally as suited to this theme. First, I’m thankful for books and for writers such as Heather Moore and Sarah Eden. Moore’s story of Mary and Martha is a reminder of the gifts and sacrifices, large and small, our Savior made for each of us. For that I am deeply grateful. Eden’s book is light and fun, but to me is a reminder to be grateful that social position, wealth, race, and gender are not the deciding factors they once were in determining what a person can achieve in this life.

MARY AND MARTHA by H.B. Moore

Mary is young, studious, and engaged to a man who disapproves of her interest in reading and studying. Martha is older than her sister and a widow. Though she has no children, she has a nurturing personality and throws herself into cooking, maintaining her brother’s home, and looking after anyone who falls within her orbit. When Jesus visits their home, she fusses over dinner and chides her sister for sitting at Jesus feet to listen to Him  instead of helping her with dinner preparations. Both sisters show friendship and concern for the man their brother helped find Jesus and for a young widower with a small daughter who must accompany him as he cares for a flock of sheep. They are greatly impressed by Jesus and become his followers and admirers.

The story unfolds with the raising of Lazarus from the dead and the events surrounding the death and resurrection of the Savior. Along with the recorded Biblical events, the author includes low key romances for the two sisters and the birth of a child for Lazarus and his wife, Leah.

Mary and Martha is a well written story that follows the New Testament account closely, then adds people, thoughts, and events that add color and emotion to  the story. As she usually does, Moore adds documentation, making it easy to separate the fiction portion of the story from the factual. Having lived in the Middle East, Moore is particularly adept at making the setting realistic and establishing a vivid background for the events she retells. My only disappointment with the story is the limited amount of contact Lazarus’s  family had with Jesus when the scriptural account indicates they were close friends. Mostly I think anyone interested in Biblical stories, world religions, the Middle East, or who simply love the stories of Jesus will enjoy this tender retelling of epic moments in the life of our Savior.

H.B. Moore also writes as Heather B. Moore and is prolific under both names with over seventy publications to her credit. She writes Women’s Fiction, Historical, Romance, Thrillers, and inspirational non-fiction. Her writing has earned her numerous awards including a Maggie, a Best in State, four Whitneys and a Golden Quill. She was born in Providence, Rhode Island, but grew up in Orem, Utah and in the Middle East. She attended the Cairo American College in Egypt, the Anglician School of Jerusalem and received her Bachelor of Science degree from Brigham Young University. She is married, and with her husband, Chris, are raising their children in Utah.

THE GENTLEMAN AND THE THIEF by Sarah M. Eden

Sarah M. Eden’s newest Proper Romance, The Gentleman and the Thief, isscheduled to arrive inbookstores this month. This Victorian tale is part Romance, a whole lot Historical, and a captivating part Mystery. The major characters are Ana Newport, a young lady who works as a music teacher, and Hollis Darby, who is a secret Penny Dreadful author and a member of a secret group dedicated to aiding London’s orphans. Both come from families that have lost their fortunes. Ana’s father, once a successful merchant, lost everything because of a dishonest partner except a crumbling old house. Hollis’s father gambled away the family fortune; the little left went to his older brother when their father passed away.

Someone is stealing small objects from upper crust homes; jewelry, figurines, curios. Some of these items are valuable, but some are of no monetary value. From the few sightings of the thief it appears the thief is a child. Hollis captures Ana thinking she is the thief until he realizes she is an adult. His group catches a little seven-year-old girl who is clearly the sneak thief. The child admits she is forced into her thefts by a master. If she doesn’t deliver she will be killed as has other children before her. They hide her and the search is on to find the master criminal.

After Ana’s father’s business collapse, creditors weren’t the only ones who took everything she and her father owned. Neighbors, tradesmen, and anyone who entered their home helped themselves to small objects they sighted. Ana is determined to regain the stolen items and becomes an accomplished sneak thief to steal them back. Ana is hired to teach piano lessons to Hollis’s niece, affording the two an opportunity to get to know each other better. They take measures to keep their secrets, but both are in pursuit of the mastermind who turns children into thieves, steals family fortunes through deception and profits from cheating at cards. A chance observation ties the crimes together and has them joining forces to catch a villain far more dangerous than a thief.

Sarah Eden is well known for creating characters that capture the readers’ heart. Such is the case with Ana and Hollis. The 1865 setting is realistic and is a reminder of the limiting poverty and class distinctions of that era. The story moves at a comfortable pace, but ends without finishing the whole story, definitely a hint there will be another volume to follow this tale.

Sarah M. Eden is a widely acclaimed author of numerous award winning Historical novels. Most, if not all, of her novels can also be referred to as romances. She and her family reside in Utah.

THE GENTLEMAN AND THE THIEF by Sarah M. Eden, Published by Shadow Mountain, 368 pages, soft cover $15.99. Also available for eReaders and Audible.