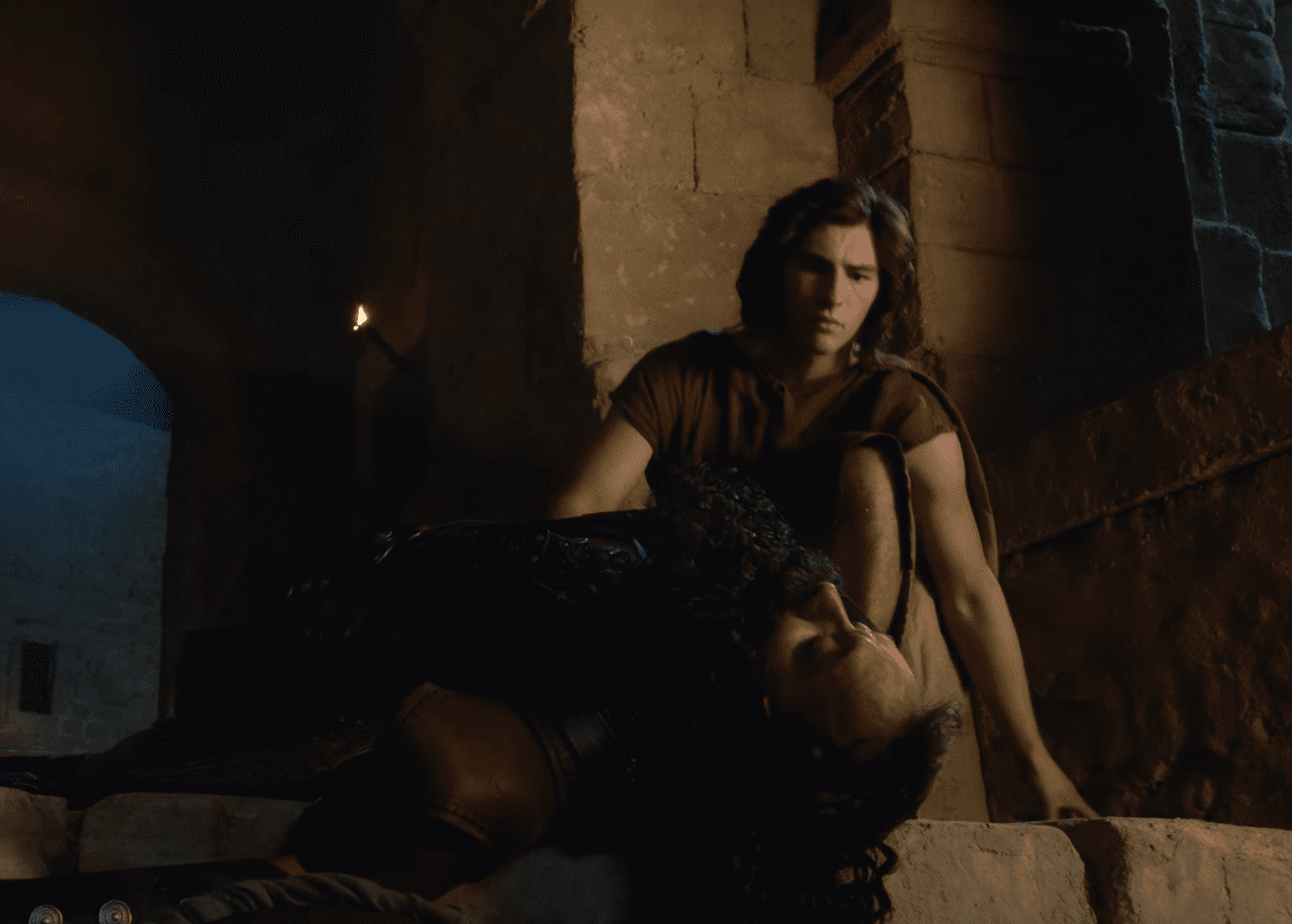 Laban: Problems of Blood and Justice

Editor’s Note: For readers who are sensitive to graphic description, be aware that the second half of this article discusses the nature of Laban’s killing in some detail.

How many times have you been asked or perhaps just wondered about Nephi’s killing of Laban?  One investigator, after reading this section remarked, “It sounds like Nephi was just rationalizing in order to justify murder!”  By western standards, it does sound like that, but under the Mosaic law, things look very different.  Another asked how Nephi could have put on Laban’s clothes, “even every whit,” when there would have been so much blood from decapitating him?  Trying to form a mental image with Laban’s head down hill just didn’t suffice considering the arterial spurting.  Resolving these two issues would not only add to the internal credibility of the record but would also resolve another later problem issue to be mentioned at the end of this article.

According to the Law of Moses, there were two differing types of killing: inexcusable, requiring judicial action, and excusable, as a type of non-judicial justice.

12 ¶ He that smiteth a man, so that he die, shall be surely put to death.

13 And if a man lie not in wait, but God deliver him into his hand; then I will appoint thee a place whither he shall flee.

14 But if a man come presumptuously upon his neighbour, to slay him with guile; thou shalt take him from mine altar, that he may die. Exodus 21

Verses 12 and 14 outline the capital nature of premeditated murder.  But verse 13 includes killing under divine direction as excusable, with a sanctuary-place designated by God. Deuteronomy 19:1-13 adds accidental killing as sanctuary-eligible as well.  It also includes a justifiable killing by the hand of “the avenger of the blood” of a previous killing or wrong committed that, “thou shalt put away the guilt of innocent blood from Israel, that it may go well with thee.” Deuteronomy 19:13

So, these conditions make it not only justifiable to kill, in restrictive circumstances, but even a duty when divinely directed as was Nephi.

This creates our second problem, how could Nephi put-on blood-soaked garments and pretend to be Laban?  Some have suggested that it was dark enough that the dark blood stains wouldn’t be visible. But then once in the treasury with lights, Zoram, Laban’s servant, sees Nephi and “beheld the garments” and so supposes that Nephi was Laban?  How is this consistent with the physiology? Some argue that Joseph Smith wouldn’t have known the physiology and that this is evidence that the story is fictional.  They also add a similar contextual problem that when added to this one becomes a deal breaker.

In Ether chapter 15 Coriantumr and Shiz fight their final battle, during which Coriantumr victoriously smites of the head of Shiz (v30). But then, “after he had smitten off the head of Shiz, that Shiz raised up on his hands and fell; and after that he had struggled for breath, he died.”  Physiologically it is impossible for a decapitated human to “raise up” or “struggle for breath.”  It might be seen in decapitated chickens but not humans.  One doctor supposed that the decapitation could have been more like a scalping, removing only the upper third of the brain to explain the aftermath.  But there is a footnote that lends a much better explanation and resolves our Laban-blood problem also.  Note 31a Judges 5:26-27.  These verses take us to the story of Deborah. She served as a judge in Israel and helped Barak lead them against the Canaanites, led by Sisera.  Judges chapter 5 is the song praising Deborah and Barak in the victory where she surreptitiously entered Sisera’s tent at night and “smote off his head” by pounding a nail through his temples.

“She put her hand to the nail, and her right hand to the workmen’s hammer; and with the hammer she smote Sisera, she smote off his head, when she had pierced and stricken through his temples.” Judges 5:26

It is obvious that she couldn’t have decapitated him with a nail!  The expression “smote off his head” is from a Hebrew word, “machaq” meaning to crush.  So Sisera as well as Laban and Shiz were killed with a fatal blow to the head, not decapitation.  This not only fits the contexts; there didn’t have to be any blood spurting from Laban, and Shiz could have easily gasped for breath as he “rose up” before succumbing to the fatal blow.

A minister of another faith, after months of examining anti-Mormon claims and material, exclaimed in frustration, “Every time I read something that proves the Book of Mormon false, we find Hebrew, or customs, or traditions that turn it around and demonstrate the veracity of the book and the fidelity of Joseph Smith as its translator.”  This has happened so many times, every time, that it is easy to recommend investing the time and effort into the spiritual effort to know by divine means that it is all true!

I offended an investigator recently who used this, where's the blood question, for his pretext to not put any serious effort into examining the Book of Mormon or its claims. I offended him because I just could not understand what the problem was. We do not have a detailed step by step drawn out picture of the precise events of that evening. By the way, the Book of Mormon is a book of doctrine not court room minutes. Nephi is explaining God's instructions and reasoning for why and how they were to proceed. He is not performing a dramatic reenactment. If you read the pertinent verses in 1 Nephi 4 you should realize this was not a thirty second mugging. Nephi spent time there with drunken Laban and with the Lord. He took time to ponder, pray, respond, deliberate. What verse 19 does not say is I cut off Laban's head and then proceeded to remove his clothing ( Wow. I really did this in the wrong order. Gosh. That was stupid.) What it does say is after I cut off his head, I took his clothes and put them on. Why was Nephi holding Laban's sword prior to having any thought about killing him. The most logical/reasonable answer is he was removing drunken Laban's clothing. Remember the mission is to get the plates. This is simple (I really don't mean to be a jerk, but) pretty obvious, and based on the fragments of information concerning what happened that evening, the most logical and rational idea concerning how Nephi proceeded. There was lots of blood. Of course there was, but not on Laban's clothes. They had been removed. This is far more economical than saying when Nephi says, 'I picked him up by the hair of his head and cut it off.' that he doesn't mean 'I cut it off'. No, Nephi cut off Laban's head and put on his clothes, just as the passage relates. My investigator friend was troubled that I would insinuate Nephi took his clothes off first. "The passage doesn't say that." Neither does it say he took them off after the head smiting." It also doesn't say he put on his sandals in the morning and ate his mush, but I bet he did. It also doesn't say he dragged Laban to a dark nearby area so as not to be seen, but I bet he did. If someone rejects the BOM because of 'where is the blood?' They really aren't very interested anyway or have other issues with the BOM or the Church or our religion because frankly that's just pretty weak.

I found more scriptural support for why Nephi was justified in killing Laban in Doctrine and Covenants section 98:23-38. It says in effect don't react to your enemy when they "smite you" two times, and if you spare them after the third time you and your posterity would have eternal rewards, "31 Nevertheless, thine enemy IS IN THINE HANDS; and if thou rewardest him according to his works thou art justified; IF HE HAS SOUGHT THY LIFE, AND THY LIFE IS ENDARGERED BY HIM, thine enemy IS IN THINE HANDS AND THOUGH ART JUSTIFIED. 32 Behold, THIS IS THE LAW I GAVE UNTO MY SERVANT NEPHI, and thy fathers, Joseph, and Jacob, and Isaac, and Abraham, and all mine ancient prophets and apostles. Nephi's account explicitly lists two times that Laban tried to kill them, and we can easily deduce that as and "elder of the Jews", Laban had tried to kill his father, just like the elders of the Jews killed the Savior. (No wonder, Laban and Lemuel said "it was a hard thing" to ask them to go back and face Laban when he had already tried to kill their father) Nephi stated twice that "Behold THE LORD HATH DELIVERED HIM INTO THY HANDS" which is the same wording as the D&C. Nephi wrote this account approximately 30 years after it happened and due to the difficulty of writing on plates, it is not surprising that he would not give every little detail of what the spirit may have told him, but what he did write is absolutely consistent with the law in the D&C, and the Lord told Joseph Smith that this was the law that he taught Nephi.