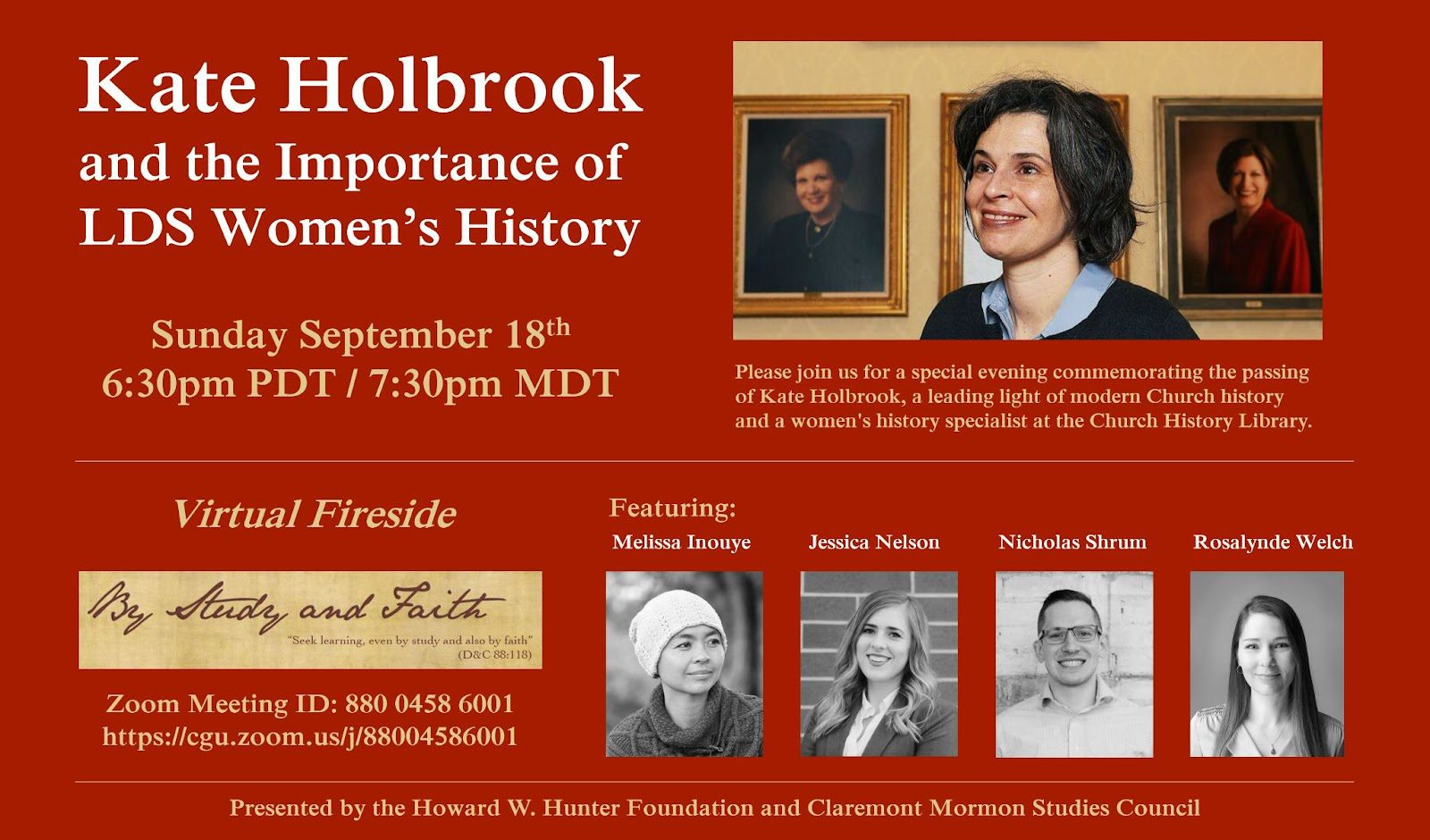 Kate Holbrook and the Importance of Latter-day Saint Women’s History: A Virtual Fireside

The Howard W. Hunter Foundation and Claremont Mormon Studies Council are pleased to carry on with our “By Study and Faith” Virtual Fireside series, featuring some of the most distinguished Latter-day Saint disciple/scholars.  Our speakers address the compelling issues of our time – issues affecting the lives of all of us who are trying to navigate a life of faith, hope, and charity in a troubled and often divisive world.  Prior firesides have included preeminent scholars Richard Bushman, Thomas Griffith, Neylan McBaine, Chase Kirkham, Lisa Olsen Tait, Jed Woodworth, Melissa Inouye, Anthony Sweat, Carter Charles, Laurel Thatcher Ulrich, Rosalynde Welch, Tammi Schneider, and Joseph Spencer, and can be accessed here.

Kate Holbrook and the Importance of LDS Women’s History

Join us for a special evening commemorating the passing of Kate Holbrook, a leading light of modern Church history and a women’s history specialist at the Church History Library. We will remember Kate, who passed away in August after a long struggle with cancer, celebrate her career, and talk about the state and future of the study of women’s role in Church history.

Kate Holbrook, PhD (1972–2022) was a leading voice in the study of Latter-day Saint women and Latter-day Saint foodways. As managing historian of women’s history at the Church of Jesus Christ of Latter-day Saints history department, she wrote, studied, and interpreted history full-time. Her major research interests were religion, gender, and food. Her primary professional activity was to discover, encourage, and celebrate women’s flourishing in the scholarly and spiritual realms. Kate grew up at the feet of the Rocky Mountains and returned there in 2006, to live among the historic sites, cultural currents, and food environments where her scholarship had its roots. She earned a BA in English and Russian literature from Brigham Young University, an MTS from Harvard Divinity School, and a PhD in Religious Studies from Boston University. She was proud wife (to Samuel Brown) and mother (to Amelia, Lucia, and Persephone Holbrook-Brown).

To commemorate her life and lasting impact, we will be joined a distinguished panel of speakers:

Melissa Wei-Tsing Inouye is a Senior Lecturer in Asian Studies at the University of Auckland and Historian at the Church History Department of The Church of Jesus Christ of Latter-day Saints. She earned her degree in East Asian Languages and Civilizations from Harvard University. Her book, China and the True Jesus: Charisma and Organization in a Chinese Christian Church (Oxford, 2019) uses a Pentecostal church founded in Beijing in 1917 to understand the history of modern China. She is also the author of a memoir, Crossings: a bald Asian American Latter-day Saint woman scholar’s ventures through life, death, cancer, and motherhood (not necessarily in that order) (Deseret Book and BYU Maxwell Institute, 2019).

Jessica Nelson joined the Joseph Smith Papers as a historian and documentary editor in 2018, contributing to volumes 12 and 14 of the Documents series. She completed a BA in American studies at Brigham Young University and an MS in history at Utah State University. Her thesis, titled “‘The Mississippi of the West’: Religion, Conservatism, and Racial Politics in Utah, 1960–1978,” was awarded the Lester E. Bush Best Thesis Award by the Mormon History Association in 2018. She loves cycling Utah’s mountains and spending time with her family.

Nicholas Shrum holds a BA in American Studies from BYU and an MA in Religion from Yale Divinity School.  He is now a first-year Ph.D. Student in Religious Studies at the University of Virginia, focusing on American Religions and Mormon Studies. He also currently works as a research assistant for the Church History Department’s upcoming book on the history of the Young Women’s organization and as the project manager for The Diaries of Emmeline B. Wells.

Rosalynde Frandsen Welch is a senior research fellow at the Neal A. Maxwell Institute for Religious Scholarship. Her research focuses on Latter-day Saint scripture, theology, and literature. She holds a PhD in early modern English literature from the University of California, San Diego, and a BA in English from Brigham Young University. She is the author of Ether: a brief theological introduction, published by the Maxwell Institute, as well as numerous articles, book chapters and reviews on Latter-day Saint thought. Dr. Welch serves as associate director of the Institute, where she coordinates faculty engagement and co-leads a special research initiative.

Join early… We can accommodate only 500 guests!