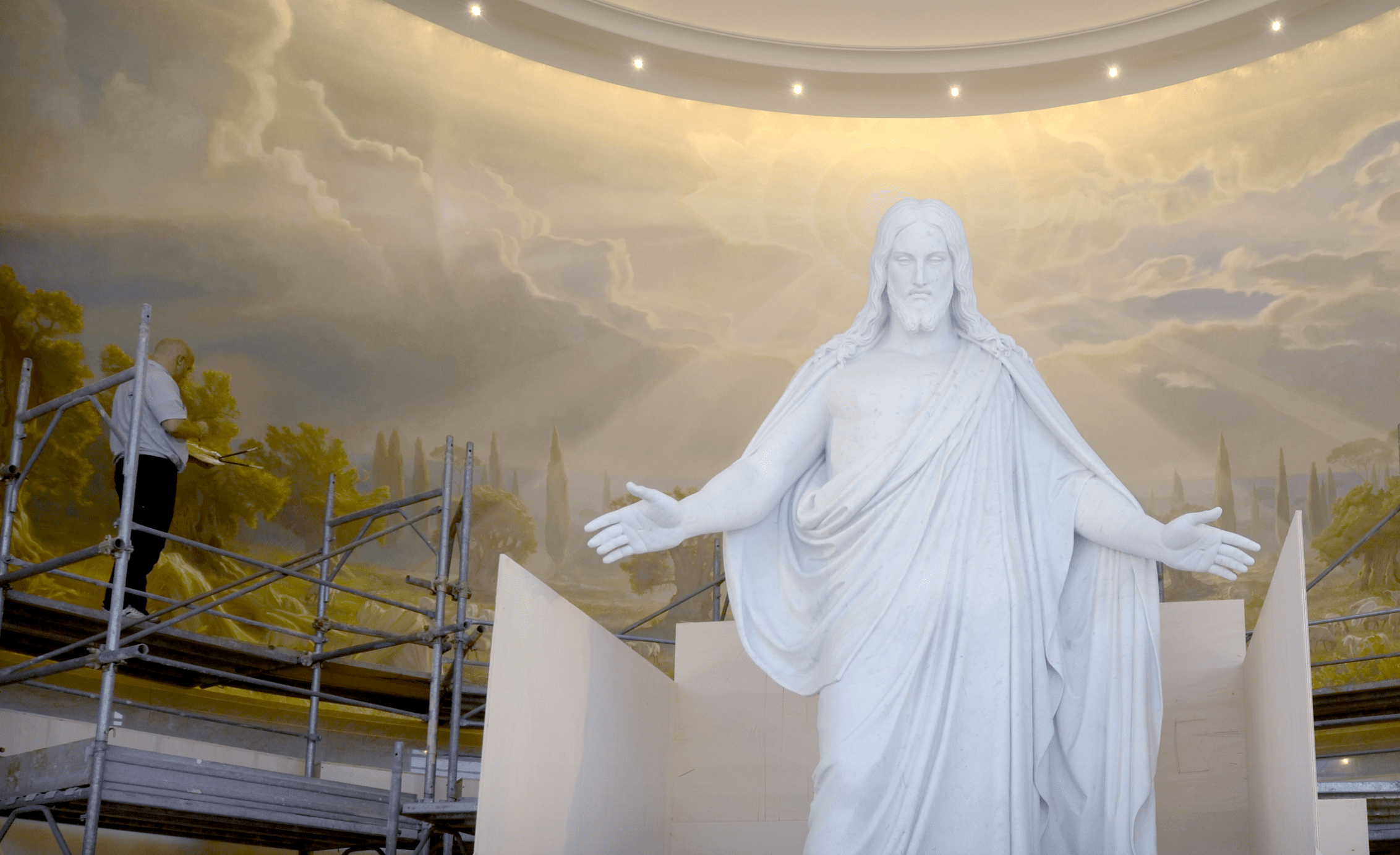 Joseph Brickey: Awed to Paint the Visitor’s Experience at the Rome Temple

Rome was known, even by the ancient Romans, as “The Eternal City”. It has been so-called throughout the centuries since then, but not until the present day has it had a temple, which could bring the people of the city truly in touch with the things of eternity. The Rome Italy Temple of The Church of Jesus Christ of Latter-day Saints was announced in October of 2008 and will finally be dedicated in just a few weeks’ time on Sunday, March 10, 2019.

The temple is part of a 15-acre complex that includes, among other things, an exquisite visitors center where artist Joseph Brickey was tasked with the daunting assignment to paint his own little piece of eternity in the form of mural, 20 feet high and nearly 50 feet wide, to accompany the Christus statue. This dazzling sculpture is familiar to many in the Church, but some may not realize that the original piece by sculptor Bertel Thorvaldsen on display in the Church of Our Lady in Denmark, is accompanied by corresponding sculptures of the twelve apostles that are equally as large and impressive.

For the first time, The Church of Jesus Christ of Latter-day Saints received special permission from the Lutheran Church to digitally scan not just the Christus, but all of the figures (with the original artist replacing Judas Iscariot with the apostle Paul) and recreate them all in the rotunda of the temple visitors center in Rome.

So it was into this already sacred space, surrounded by figures of the Lord’s ancient anointed with a depiction of Christ himself in the center, that Joseph Brickey contemplated the blank wall behind them all and what he should put there. These statues were quarried from the same marble in Tuscany that makes up the Michelangelo’s David. And that same renowned artist’s work on the ceiling of the Sistine Chapel attracts five million visitors a year.

I asked Joseph if it was a pressure or a pleasure to embark on painting a mural in a city already so renowned for its religious art. “Part of the thrill and adrenaline rush was knowing that you had the opportunity to sort of stand next to Rafael and Michelangelo,” he told me, “To do a piece that was for a religious space that was also monumental in scope allowed me participate in that tradition in Rome.”

But this project was also important to Brickey in a way that is altogether more deeply personal than just stepping into the timeline of Roman art history. It was while working on a mural for the Copenhagen Denmark Temple in 2004 that he first visited the original Thorvaldsen Christus and apostle statues and had what he called a “temple-like experience” seeing them. So temple-like in fact, that it was upon finishing that project in Copenhagen that he decided to marry his now wife. He flew her to Denmark and proposed in front of the original Christus statue. So besides the impact of its subject, that statue represents the stuff of eternity for him in other layered and important ways.

But what could he paint to complement the experience of seeing it?

“The impressions I had in the space that first day were pretty much what drove all my decisions after that,” said Brickey. “ I felt a sense of light in the space that I felt the mural should reinforce. I stood in front of the Christus contemplating and imagining what the mural should look like behind in that way and I just felt that it was all about your feeling standing in front of the Christus…that’s really where the imagery began to flow.”

The Church had asked that the mural incorporate an Italian landscape, something that the local Italians could feel a connection to, but that was all the direction he was given. Isn’t it magnificent that each of these temples being built all over the world is so carefully crafted to celebrate and honor the local architecture, landscape, and people? So far as we are aware, Christ never walked the fields of Italy during his mortal life, and yet through the temple he can visit us each in our own place and time and in our own language.

So it was with that first impression that Joseph Brickey returned to his studio in Orem to paint. The mural would be done on a temporary frame before being rolled up and shipped in a tube to Rome where, after it was affixed, Joseph could apply the detail work and finishing touches, a process that took an additional two and a half weeks on site.

Though working from home has its perks, working on a project like this from so far away also had its difficulties. “Every single day painting on the mural here, I was trying to envision it there,” he said, “It was critical to visualize how the mural would work in the space itself, not just how it worked in the space it was being painted.”

In addition came the difficulty of, as Brickey put it, “being in an artistically visionary mode while you’re eating a banana and chasing kids around—that’s a challenge.”

But especially with experience, Brickey said that artists become amphibians, “you’ve got one foot in the real world, but part of yourself is always in this other realm that isn’t where your physical presence is. In some ways, artists are like little kids who never stop daydreaming and living in their own little imaginary world with imaginary friends.”

“To transport others—to be a guide in the imaginary realm, you have to be a local.”

Only the place viewers can be transported as they visit this space is not imaginary. The entire experience of this visitors center is meant to testify of truths that are real and essential and important, even to those visitors that are not members of the Church.

“That was always part of my paradigm too, that this mural was for all people and my intent was that I wanted anybody who already felt reverential towards Christ, as well as those who don’t necessarily bring with them any sense of devotion—to still feel that as they entered the space. To still feel the warmth and welcome of entering a place that is familiar—and feel that they belonged.”

“I’ve always felt that art is able to teach without being preachy,” Brickey added. “It’s always in a passive voice. Art is not aggressive, you have to enter it and receive it of your own free will. Because it’s non-verbal, it can be bold, but not overbearing.”

Additionally, the non-verbal aspect of art allows it to access something inside of us and resonate in a way that transcends some of the inadequacy we may feel in finding the words to communicate spiritual things. It is no accident that the Church puts such great effort and energy into creating intricately beautiful and artistically exemplary spaces in which to commune with the Lord.

And the message and orientation of this space bears an important contrast to other places of worship in Europe in particular. Besides occupying a room that is glass halfway around and therefore allows a daily outpouring of sunlight that is unusual compared to other churches and cathedrals, it bears another striking and unique characteristic.

Though you may never have known it as you walked into an old church, an extremely common feature in the design of cathedrals in western Europe is that the long nave, or aisle down the center, is intersected with the transept space in the front, ultimately forming the shape of a cross as the central floorpan of the building. Often at the front over the altar is a sculpture of the crucified and dying Christ, an additional reminder of his suffering and death.

While we remember and hold sacred how He died for us, Latter-day Saints choose to focus on the living Christ and the hope of His glorious resurrection. It is beautifully appropriate then that at the center of this vast rotunda would be the living Christ with everything else in the room oriented towards Him and the mural behind adding cascades of additional heavenly light to remind us of the light He will gladly bring into our lives if we would but allow Him to.

What an apt symbol of all that the temple means to us. Christ broke the bands of death and rose again and it’s only because of that that the temple ordinances are available to be done for those who would otherwise be cheated and defeated by death.

“Foremost, the driving paradigm for me,” said Brickey, “was that Jesus Christ is the light of the world and Savior of all mankind. No matter what your life experience, you can enter into his peace and his pasture.”

“My working title for the mural was ‘The Lord’s Pasture’ and a lot of the elements in the mural were meant to convey this idea—using scriptural symbols that all combine to express that this beautiful world is part of His creation and that we live under His hand and He just asks us to come unto him.”

“My hope is that anyone who enters that space—locals or tourists—could feel that they belong in His divine embrace that He offers to the world. That the landscape would both feel familiar, but also iconic and symbolic. To have an artistic experience that is really transcendent, you have to be able to pass the threshold from your physical experience to a spiritual one through the lens of art. Art itself is just kind of boundary between the physical and spiritual.”

“When you stand in front of the Christus, hopefully you’re not just thinking that it’s a block of marble. You’re able to be transported by its symbolic representation to a world that is beyond the physical space.”

“That is my hope, that people can be transported to a space where they can imagine themselves standing in front of Christ and that it is a space full of light and full of love and his gesture of embrace is echoed in the design of the room and in the shape of the mural.”

The rising sun in the mural shines from its true orientation in the east and surrounds the Christus in rays of light that draw the eye towards His ever outstretched hands. Every image and color and shape in the room brings the visitor back to an invitation waiting to be accepted.

The open house for the Rome Temple, the only chance for those without a recommend to see inside, will end on February 16, 2019. But Joseph Brickey has contributed to creating a visitor experience that can go on and on. Ultimately, no matter who finds their way to the temple grounds, an eternal experience in The Eternal City is waiting for them.

Cant wait to be there to see, feel and experience the spirit that is there.

OH how wonderful ! Just yesterday my wife and I were wondering what Joseph Brickey was doing these days ! We met him and his father many years ago at a book signing in San Diego , after which we enjoyed a meal and chat with them both ! I worked with his late father Wayne at the LDS Institute of Religion back in the early 70 's. Nice to see Joseph still doing such inspiring work ! Wonderful people !