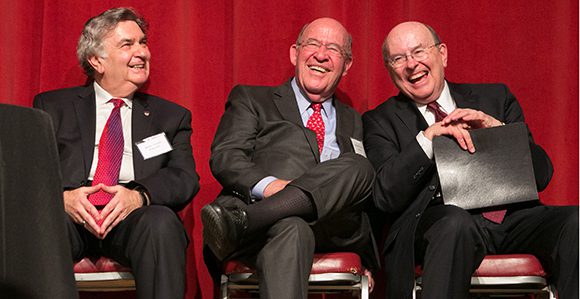 After lauding the service of his friend Rabbi Joseph Potasnik, Elder Quentin L. Cook spoke in New York City on December 18 about the common ground that exists between the Latter-day Saint and Jewish communities.

“We share with our Jewish friends the concern for oppressed people and those who face special challenges,” said Elder Cook of the Quorum of the Twelve Apostles.

Speaking to the New York Latter-day Saint Professional Association, Elder Cook offered a tribute to Rabbi Potasnik, executive vice president of the New York Board of Rabbis who was honored with the event’s Visionary Leadership Award.

During the event, held in the historic Riverside Chapel in Manhattan and attended by a capacity crowd of more than 400, Elder Cook addressed some of the unique Church doctrine that ties Latter-day Saints closely to those of the Jewish faith.

Elder Cook also praised the Latter-day Saint Professional Association, which has been “a bridge and outreach to prominent leaders of different faiths,” he said.

There have been numerous personal relationships with Jews and Latter-day Saints that have been strong and rewarding over a long period of time, said Elder Cook.

Earlier in his life when he completed his law school education at Stanford University, Elder Cook joined a law firm where the managing partner was of Jewish descent and became his mentor and dear friend. A significant number of the friends of the Cook children, as they were growing up in the San Francisco Bay area, were also of Jewish descent. “I’m sure if we asked those of you who are here tonight, you could echo those same kinds of rewarding relationships,” he said.

A more institutional—or “leader-to-leader” relationship between the faiths—is more recent, said Elder Cook. “I believe one of the reasons this did not occur earlier is that our principal centers of influence are primarily in different parts of the United States.”

Great article on the relationship between Jewish and L.D.S. people, showing the many beliefs and practices that unite us. I especially loved the quote by Robert Abrams, the former New York attorney general, in the complete article on lds.org, linked at the bottom of this article: “Each has a fundamental focus on family, each place a very high value on education, each has a strong commitment to charitable giving, each demonstrates humanitarian concern and response when there are international catastrophes such as earthquakes, hurricanes and tsunamis around the globe, each has a history of disproportionate success due to ability, hard work and determination and each has been subjected to fierce persecution and prejudice.” A good foundation for building an ever closer relationship in the days ahead.

Finding and sharing common respect and ground with other faiths, especially with the one which is our foundation, is such a valuable thing. May we share such things in our local areas, as members and stakes and wards? And please be aware of www.mormonsandjews.org which seeks to develop understanding, respect, and strengthened faith through that understanding.