It's Time for Some Teen Work at Netflix | Meridian Magazine 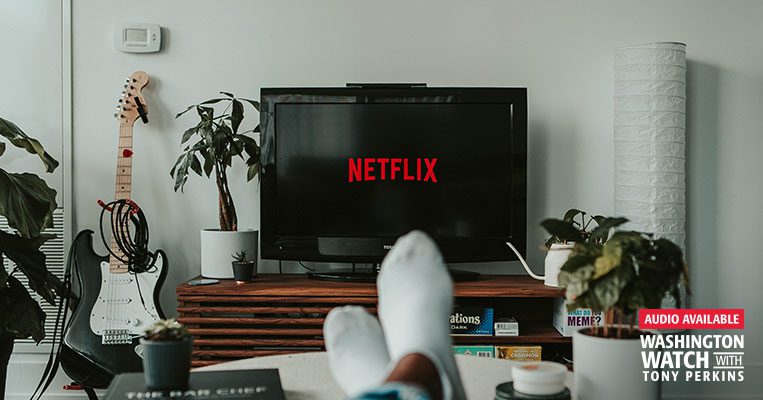 It’s Time for Some Teen Work at Netflix

Most parents don’t hand their kids the remote on the “Teen TV” menu and expect them to be able to choose from “The End of the F***ing World,” “Sex Education,” or the suicide shocker, “13 Reasons Why.” But on platforms like Netflix, where the ratings don’t seem to factor into how the programs are listed, your middle schooler could be stumbling on all kinds of surprising content. Maybe, like a lot of moms and dads, you assume a TV-14 Netflix show is the same as TV-14 on broadcast television. Well, I’ve got news for you, entertainment writer Michael Foust said: “It’s not.”

Even vigilant parents can be duped by Netflix’s system, Tim Winter, president of the Parents Television Council warns. “When you look at their categories,” he told Sarah Perry on “Washington Watch” Friday, “what we quickly learned was that almost half of the titles that are labeled as ‘appropriate for teens’ are actually rated either R under the motion picture system or TV-MA meaning ‘Mature Audiences’ only. So, by definition, half of the shows that they’re saying are appropriate for teens are inappropriate for teens just [based on the] content rating system.”

Part of the problem, Tim explains, is that platforms like Netflix weren’t around in 1996 when the FCC created the ratings rules. “You’re talking about a rating system that was crafted 25 years ago before iPads and iPhones even existed — before Netflix existed. Before Amazon existed.” And while the technology has evolved, he points out, the system hasn’t. “And then… on top of that the antiquated way the guidelines are written, each distributor — whether it’s a TV network, a cable network, Netflix — each of these network rates its own content. There are supposed to be standards. But what we’ve seen is routinely these networks and distributors will rate things [as more innocent than they are] in order to get more children to watch, knowing that the content is actually inappropriate for children.”

In a brand-new report, just released by PTC for parents navigating this stay-at-home world, Tim’s team combed through 255 Netflix titles that were categorized by the streaming company as “appropriate for teens.” Half of them were either R-rated or “Mature Audiences” only. That’s a major problem, now that family streaming is through the roof. In the first three weeks of March alone, there was an 85 percent spike in television viewing — hitting historic levels of media consumption by Americans.

Of the 400 billion minutes people sat plunked in front of their televisions those three weeks, Netflix won the biggest share of the streaming pie with 29 percent — with YouTube (20 percent), Hulu (10 percent), and Amazon Prime (nine percent) falling in behind. “That’s particularly troubling,” the report points out, “because Netflix streams programming to cell phones, laptop computers, tablets and other devices that are routinely outside the purview of a parent.” And considering how the shows are labeled, “setting parental controls on those media devices will fail to do what parents expect.”

Even if, by some miracle, a TV-14 show does manage to avoid sex, drugs, violence, and suicide, there’s one thing parents can expect to hear no matter what: profanity. Another thing Tim learned is that “almost every single [TV-14] show included some of the harshest [language] — words that I would never, ever speak to you on a radio broadcast. You have to scratch your head [when] Netflix is saying that this is appropriate for teenage children. How are parents supposed to be able to trust a rating system that’s the right there on their program guide?”

It’s like going to the grocery store and looking at the ingredients on the back of a box, he says. “You’re thinking, should I buy this? So you look at the… nutritional value. And you’re relying on the accuracy of that information to decide whether or not you’re going to allow your family to ingest it into their bodies. It’s the same thing here — where you have inaccurately rated material that says it’s comprised of one thing, when in fact it’s comprised of something else. And it’s very unhealthy for us to be putting into our children’s minds. And that’s what is so galling that these so-called parental control devices. If the ratings are accurate, then the filtering devices can’t trigger and work properly.”

It’s not that parents aren’t making the best choices they can — it’s that the system isn’t giving them all the details to work with. “Parents deserve a ratings system that’s transparent and consistent across all platforms,” PTC insists. “If TV-14 doesn’t mean the same thing on Netflix as it does on CBS, it’s of little value to [anyone].” In the meantime, there are great options for families who don’t want to risk it, like VidAngel, Minno, Pure Flix, and RightNowMedia. Try an alternative you can trust!

Our Netflix account was cancelled because this no longer serves our family-"Gay Jesus" (aka "The First Temptation of Christ") among them, but there's plenty of other worthless junk. Plenty of free options, and other subscriber services (such as "Living Scriptures" "VidAngel", etc). We work too hard for our $$$ to support that.