In the Beginning: Being Present at the Creation with Moses and Joseph Smith | Meridian Magazine 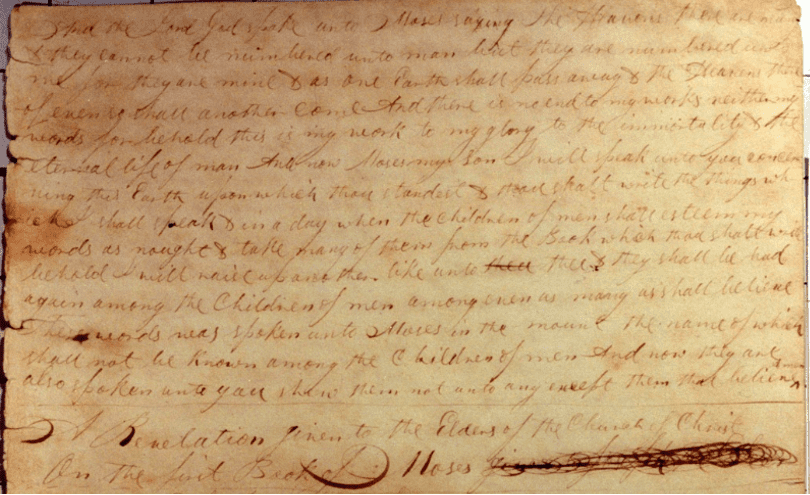 In the Beginning: Being Present at the Creation with Moses and Joseph Smith

In all of recorded history, two lessons on “the beginning” (Genesis 1:1) stand out among all others. The first, recorded in the Pearl of Great Price, was sort of like “Take Your Child to Work Day” when a child spends one day at work with a parent to learn what they do. Moses was the child. Heavenly Father was the parent. Moses was “transfigured before him” and the lesson was delivered with stunning effects.[1]

God showed Moses “the workmanship of [His] hands,” Moses “marveled and wondered” at the vision he beheld and pleaded with God to understand more.[2] I would pay any price to be privy to that lesson. The closest I can come is reading the Book of Moses as revealed to Joseph Smith.

The second lesson on “the beginning” was less spectacular, but I would likewise go to great lengths to have been present when it was delivered. The closest I can get is Wilford Woodruff’s record of the occasion in his journal. It was Joseph Smith’s last conference talk, a sermon that Wilford described as “important edefying & interesting.” (Wilford used the word interesting as an understated adjective for some of the best experiences of his life.)

On April 7, 1844, Wilford listened to Joseph’s Conference address. It doubled as a sermon honoring the dead— “lost friends” as Joseph called them—and especially King Follett, who had been killed in an accident a month earlier.

If you can’t be with Moses on the mountaintop, listening to Joseph in the open air would be the next best thing. Imagine how his teachings, read in light of the revelation to Moses in the Pearl of Great Price, could enhance one’s study of the Old Testament.

According to Wilford’s journal, Joseph’s sermon started like this: “Go to the morn of creation to understand of the decrees of the Eloheem at the creation. It is necessary for us to have an understanding of God at the beginning. If we get a good start first we can go right, but if you start wrong you may go wrong. But few understand the character of God. They do not know; they do not understand their relationship to God.”[5]

That’s a strong point. In Joseph’s time many people’s idea of God was based on an incorrect Greek philosophical premise that didn’t match the words of Genesis. It was an assumption, really, the assumption that change had to be explained by something that never changed. Everything else—everything that moved or aged or related to time—was just part of that one ultimate thing. And that thing was God.

Joseph continued: “I go back to the beginning to show what kind of a being God was. I will tell you & hear it O Earth! God who sits in yonder heavens is a man like yourselves That GOD if you were to see him to day that holds the worlds you would see him like a man in form, like yourselves. Adam was made in his image and talked with him, walked with him. In order to understand the dead for the consolation of those that mourn, I want you to understand God and how he comes to be God. We suppose that God was God from eternity, I will refute that Idea, or I will do away or take away the veil so you may see.”[8]

Joseph’s teachings were so different from the mainstream. They had important implications for how Christians understood and related to God. The God Joseph knew was what theologians call passable. He wasn’t, in other words, without body, parts, or passions. Rather, He possessed them all perfectly. And all people were His children, with potential to become like Him.

Joseph taught: “You have got to learn how to make yourselves God, king and priest, by going from a small capacity to a great capacity to the resurrection of the dead to dwelling in everlasting burnings. I want you to know the first principle of this law, how consoling to the mourner when they part with a friend to know that though they lay down this body it will rise & dwell with everlasting burnings to be an heir of God & joint heir of Jesus Christ enjoying the same rise exhaltation & glory untill you arive at the station of a God.”[9]

Joseph taught that Jesus had become exalted, and because of Him we could too, but not overnight: “These are the first principles of the gospel. It will take a long time after the grave to understand the whole [plan].”[10]

Joseph knew that his audience, who had converted primarily from Protestant forms of Christianity, might find his teachings contrary to their understanding. So he turned to the first verse of the Bible to illustrate his points. He offered an expanded translation of it and a commentary. He knew there would be plenty of critics of his exegesis—his interpretation of Genesis 1—which was an unusual combination of revelation and book learning, as Joseph relied on the Spirit and his Hebrew and German lessons. “I have the oldest Book in the world & the Holy Ghost,” Joseph said. “I thank God for the old Book but more for the Holy Ghost.”[11]

Joseph showed that his teachings were indeed grounded in the Bible, not in Greek philosophy. He taught that the verb translated as created in Genesis 1:1 refers to organizing both spiritual and elemental matter into divine human beings with power to become exalted as God is. From his Hebrew studies, Joseph knew that the word translated as God in Genesis 1:1 is plural—Gods: “Gods created the heaven and the earth.” It was, Joseph taught, “The Gods [who] came together & concocked the plan of making the world & the inhabitants . . . .”[12]

Wilford and thousands of others must have been on the edges of their seats at this point, if they even had seats at all. Joseph rejected the Christian doctrine of “creation out of nothing.” Though not scripturally based, this doctrine was foundational to the prevailing philosophical concept of God. By Joseph’s time, Christianity was thoroughly and completely committed to God creating from nothing. God himself, Christians thought, depended on that doctrine.

So the Lord restored the biblical doctrine of creation through Joseph. He taught it in these words: “the learned Dr says the Lords made the world out of nothing, you tell them that God made the world out of sumthing, & they think you are a fool. But I am learned & know more than the whole world, the Holy Ghost does any how, & I will associate my self wit[h] it.”[13]

This restored doctrine upset long-established ideas about God’s omnipotence. Joseph was saying there were things God could and could not do. He could create lives out of existing spirit and element, but not create Himself from nothing nor the spirit or the element. Joseph’s teachings seemed blasphemous then, and, to this day, they are rejected and considered repugnant by many. But they can be expansive and liberating once we reevaluate the concept of omnipotence.

For example, consider the famous questions: Can God make a rock so big he can’t lift it? Can God make himself cease to exist? Such unanswerable questions can evoke careful consideration about the nature of God. We should not assume what God is like based on abstract philosophical concepts. It’s best to learn what God is like from someone who knows God. Joseph Smith knew God.

As Wilford listened, Joseph used the ring on his finger to illustrate his teachings: “The soul the mind of man, whare did it come from. The learned says God made it in the beginning, but it is not so. I know better. God has told me so. If you don’t believe it, it wont make the truth without effect. God was a self exhisting being, man exhist[s] upon the same principle. God made a tabernacle & put a spirit in it and it became a Human soul, man exhisted in spirit & mind coequal with God himself . . . .

my ring is like the exhistanc of man it has no begining or end, if cut into their would be a begining & end, so with man if it had a begining it will have an end if I am right I might say God never had power to create the spirit of man, God himself could not create himself. Intelligence is Eternal & it is self exhisting. All mind is susseptible of improvement, the relationship we have with God places us in a situation to advance in knowledge. God has power to institute laws to instruct the weaker intelligences that they may be exhalted with himself this is good doctrin, it taste good. I can taste the principles of eternal life, so can you, they are given to me by the revelations of Jesus Christ and I know you believe it.”[14]

Wilford Woodruff believed it. It tasted good to him. Joseph’s teachings started right. If we begin our reading of the Bible with these teachings in mind, we will likely go right. But if we start wrong, we may go wrong.

Let’s start by understanding that we belong to a Heavenly Family. We are the children of Gods, Heavenly Parents, whose divine Son Jesus Christ was part of the plan from the very beginning to create us in their image. That creative process has begun but is not completed, not until we are exalted.

No one took Joseph’s teachings to heart more than Wilford Woodruff. He spent his life making and keeping the covenants that allowed the Savior’s Atonement to apply in his quest to become like God. Because of the teachings of Joseph Smith, Wilford Woodruff knew and understood his relationship to his Heavenly Parents and to their divine son, our Savior Jesus Christ.

Steve is a professor of Church history and doctrine at Brigham Young University and the Executive Editor of the Wilford Woodruff Papers. After graduating from BYU with a BA in history, he earned an MA in American history from Utah State University, and a PhD in early American history from Lehigh University. He began teaching at BYU Hawaii in 2000, then joined the faculty at BYU in 2002, and taught at the BYU Jerusalem Center in 2011–2012. He became a volume editor of The Joseph Smith Papers and the document editor for BYU Studies in 2002. In 2012 Steve was appointed as the managing historian and a general editor of Saints: The Story of the Church of Jesus Christ in the Latter Days and was named editor in chief of BYU Studies Quarterly in 2018. He has authored numerous books and dozens of articles including Promised Land (2006), Making Sense of the Doctrine and Covenants (2008), Joseph Smith’s First Vision (2012), and First Vision: Memory and Mormon Origins (2019).

If you are willing to volunteer your time and talents and be a part of this historic undertaking, please visit our volunteer page to learn more about current opportunities.

To financially support our transcription and research teams, you can make a donation or contact us at [email protected] for more information.

Brother Harper, I think I understand that God created all things out of matter and intelligence that already existed, and that these cannot be created or made, but did God organize intelligence to create our spirits, as in "God is the Father of our spirits. We are the offspring of God." Something in your wonderful article sounded like spirits always existed. We you equating intelligence with a spirit? Did I misread something? Certainly, for me the hardest thing to comprehend is where all this began, but I love Joseph's teachings, and his invitation to come to know God, REALLY know him. I appreciated your article so much. Thank you.