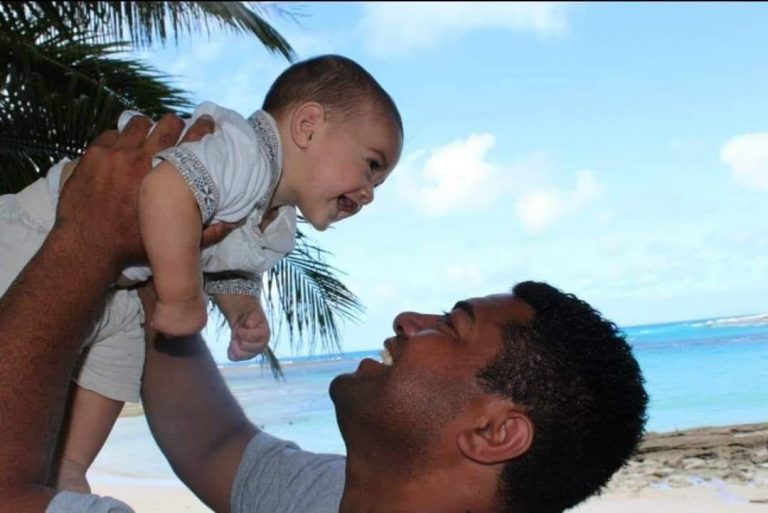 Editors’ Note: This tragic story comes with a request from the author and from Meridian’s editors for help for this young family. Please read this amazing, beautiful, miraculous story. You can help here:

I’ve been dreading this post. But I want you to know this amazing/tragic story, hoping it might help you with perspective in your life as it has for me in mine, that God indeed has a plan for us.

I served a mission for the Church of Jesus Christ of Latter-Day Saints in Fiji from 2001-2003. In 2002, I was serving in a small Island called Rotuma, about 400 miles north of Fiji. I was serving with Vita Qaqa; he and I were the Branch Presidency of our branch of 6 members of the church in Rotuma.

In early December, we planned a Christmas party for the branch and some friends we’d been teaching. We invited a young man named Tevita Atalifo to come eat some good food and play volleyball with us. To our surprise, he came. After playing, laughing, and eating, we decided to hike to a beautiful swimming spot on the beach called Fuli’u.

Elder Qaqa and I were the only ones to not get in the water because “mission rules” dictated that we not swim. Tevita approached us and asked why we weren’t swimming. “It’s so hot and the water is incredible.” He wasn’t wrong, but we told him that we’d committed to not swim as a part of our commitment as missionaries. He then asked what other mission rules we adhered to. We told him that we don’t drink alcohol, or even coffee or tea. We told him we woke up early and needed to be in bed at a certain time – that our days were committed to studying and teaching the gospel of Jesus Christ.

Tevita asked if it was possible for him to be a missionary for our church, which wasn’t a common question we received. He then told us of a dream he’d just had. He dreamt that I (Adam) was riding my bike around the corner on the white sand road from Oinafa (my village) to Lopta (Tevita’s village) just like I did with Elder Qaqa most days. He assumed the bike following me was Qaqa. But it wasn’t. “It was me,” Tevita said. “I was wearing a name tag and I was following your lead to serve Jesus.” “I feel that is a calling from God. I haven’t been able to focus on anything but that dream for days.”

That evening we had Tevita come to beach in front of our 30’x10′ flat, (which acted as our chapel). The first discussion about the Restoration took almost 3 hours to teach because Tevita had so many questions. It usually took 30-40 min, but he was so hungry to learn. He was studying to be a pastor in the Methodist church. In an excerpt from my journal, Tevita commented, “I’ve never heard any of this, but it is all familiar to me. It’s like I already knew it and you are just reminding me about these gospel truths.” Qaqa commented, “Next time we meet we’ll teach you a discussion about the plan of salvation regarding what we knew before this life, and what happens after we die. You have learned these truths before.” Tevita said, “Teach me now. I need to know more.” So we spent another couple hours on the next discussion.

It was late at this point, so Tevita walked home (about 30 min walk) to Lopta.

At 4AM the next morning, Qaqa and I heard a knock on our door that woke us up. We hurried to the front door to find Tevita sobbing. He said, “I couldn’t sleep. Please, I need to know more.” We showered quickly and put on our proselyting clothes and then taught him the rest of the 6 discussions that day. Tevita committed to come to church the following Sunday, but he was reluctant to accept the invitation to be baptized. We soon learned why.

Tevita came to church that Sunday and was one of the most meaningful contributors. His spirit was strong, but he was clearly apprehensive to jump all in.

The following Sunday, Tevita no-showed our church meeting, but came later that evening to explain why. Tevita’s father was next-in-line to be chief in a village that had no line separating the Methodist Church with their local operating government. Joining a strange “American Church” would disgrace the family and the village. Tevita knew that were he to join the church, that meant he would no longer be able to live at home.

Qaqa and I conducted an interview with him that week to ensure he was ready to be baptized. In that interview, Tevita shared something that has stayed with me since. “I know that you and Elder Qaqa and I were best friends before this life. I know that you promised me you would come to earth and would find me in Rotuma.”

The baptism program was set to begin at 10AM on Saturday morning. At 10:30, Tevita hadn’t yet showed. We were getting ready to call it off when he finally showed shortly after 11AM. He came with a packed bag. He was baptized in the ocean in Oinafa and then hurried to the boat to take a 3-day trip to move to Fiji. His decision to join indeed meant that he needed to leave home.

When he landed in Fiji, he was immediately adopted by the amazing Varea family who welcomed him.

On his first Sunday at church in Fiji, he asked his bishop what it would take to serve a mission. He learned that the ward would sponsor his costs if he were to earn a significant portion on his own. So Tevita went to Suva (Fiji’s capital city) to sell sandwiches every day to earn money to qualify to serve his mission.

My parents, Mike and Terri Chase, came to Fiji to pick me up and tour the mission with me. I had Tevita come with me and stay with us for most of that trip. My mom called Tevita her son, and Tevita called her “mom” and me, “brother.” Our bond was like that of family.

A short time later, Tevita served a mission in New Zealand. I wrote him several times, and then admittedly I lost track of him. Until…

Tevita had a rugby scholarship to BYU and the day before school started he was diagnosed with a tumor on his knee. Miracle after miracle took place to preserve Tevita’s life. But for the last 12 years, he has battled tumor after tumor (knee, hip, spine, skull, lungs).

Tevita and Lynsie went on to have 4 kids. Their oldest: Adam Sefeti Atalifo is named after me and Tevita’s dad, who welcomed him home to Rotuma several years ago. Adam is 10-years-old and has 3 more brothers, John (and twin boys Levi and Reed (5).

This past Friday, June 17, 2022, Tevita finally lost his battle with cancer leaving behind his strong, yet overwhelmed wife and his strong, yet vulnerable boys. I’ve been heartbroken as I’ve balanced God’s will with my own.

Anyone who ever knew Tevita loves him. He was always positive, friendly, faithful, and courageous. I can’t think of many people I’d more like to model my life after. He loved his family. He loved his rich Rotuman and Fijian culture. He loved to coach, and he had a lot of success with the BYU girls Rugby teams over the years. He was a fighter, and he always had a smile on his face. He was my brother even before he met Lynsie. And his love for my sister and my family will forever be remembered.

Taking his responsibility seriously, of always trying to bless and be there for his missionary convert, Adam Chase, the author of this article, had put together a GoFundMe to help support Lynsie and her four young sons. Tevita has been so sick for so long, his family could use your support. We at Meridian Magazine knew Tevita well and know the Chase family. A lot of people doing something can really make a difference in the Atalifo family.

What a story! The Lord's hand is manifest once again. Bless all the family members here to get through this trial and press forward. The gospel is true!

I love this story. I know that we had relationships in our pre-earth life. What a beautiful testimony of listening to and following the spirit.