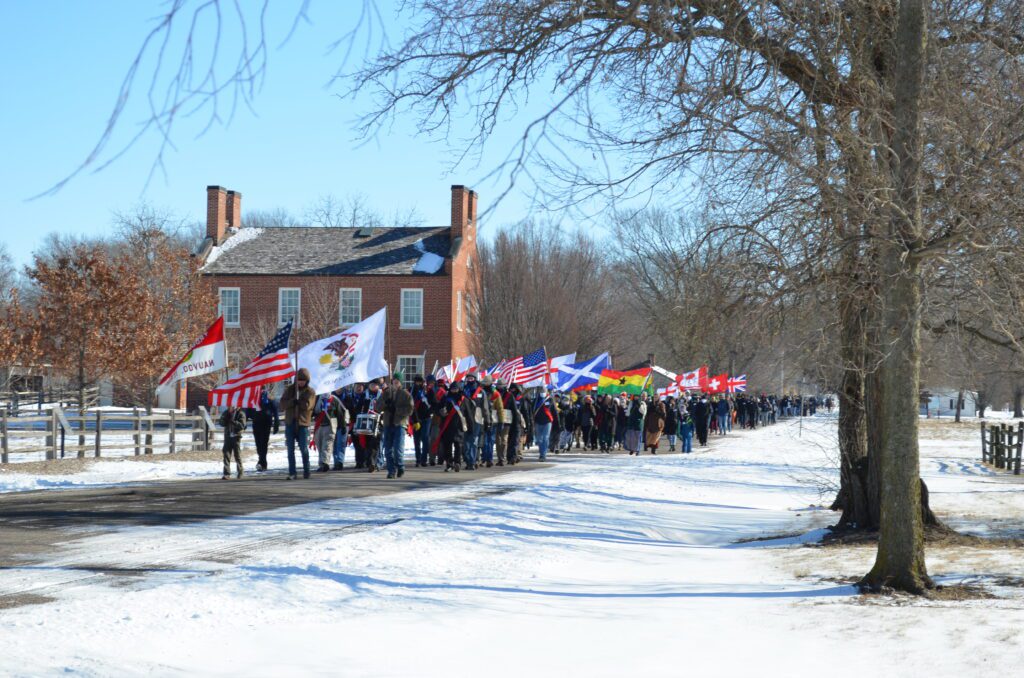 Braving 10-degree Fahrenheit temperatures and subzero wind chills on Saturday, Feb. 5, more than 300 people gathered in historic Nauvoo with missionaries serving in the Illinois Historic Sites to commemorate the 1846 exodus of the Latter-day Saints from Nauvoo.

The Mississippi River was frozen and snow-covered — just as it was in 1846. Several visitors commented on the similar weather conditions as they tried to keep warm or as they ventured out onto the river ice.

Speaking from the Exodus Memorial, at the end of Parley Street near the river, Illinois Historic Sites President Craig Lee Dalton described his feelings as he and Sister Sandra Dalton drove to Nauvoo in January to begin their newest mission as site leaders. “It quickly dawned on me that we were traveling roughly along that trail that many of the people that you’re representing here today blazed,” he said.

Listing off stops in Wyoming and Iowa, he continued: “I reflected on their struggles in 1846. And then as we arrived at the Mississippi River and I saw that it was frozen over, I remembered that some of those Saints were able to pass over this great river on the ice.”

The difference in the Daltons’ journey wasn’t that it was done in reverse, more comfortably or in a much shorter time frame, but that it was done with assurance of a destination. The early Saints had no such knowledge, only faith to guide them.

President Dalton spoke about his own pioneer ancestor Abigail Mead McBride, who was an elderly widow when she entered the Salt Lake Valley in 1847. Her faith didn’t waiver in the face of uncertainty and challenge. This is the pattern, said President Dalton, for any of today’s pioneers who face unknowns or are the only Church members in their extended families, such as Sister Dalton.

Many participants had stories of their own to share.