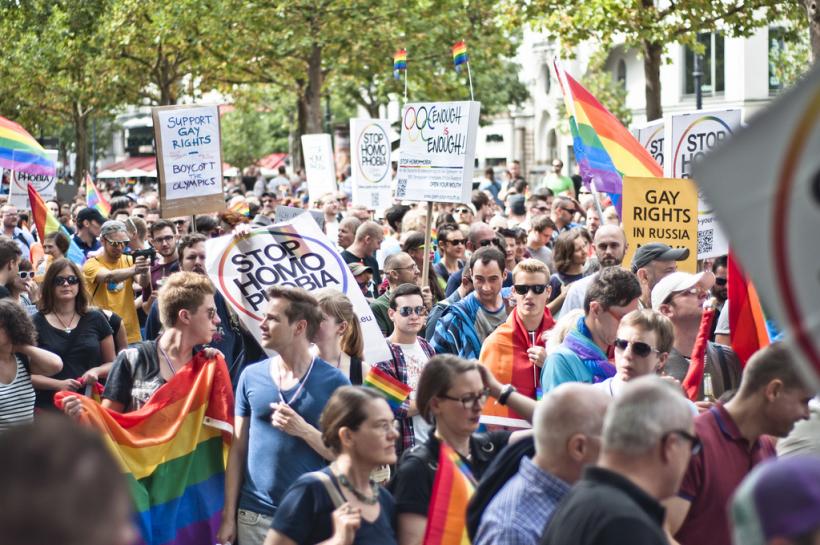 How We Got Here: Media’s Sales Pitch for Gay ‘Marriage’

Kristine Marsh and Matthew Philbin at the Media Research Center document how the news media have sold gay ‘marriage’ to the American public.

It’s quite an accomplishment, overturning millennia of understanding about marriage. In just a couple of self-obsessed and nihilistic generations, we’ve managed to render that sacred pillar of civil society more or less meaningless. We’ve degraded it into just another “right” in the never-ending list progressive activists demand, judges arbitrarily invent, and bureaucrats uphold at the expense of actual constitutional rights. But boy did we have help! Marriage was in a lamentable state anyway, stripped of religious significance and “til death do us part” seriousness. But it’s the media elite’s relentless normalization of homosexuality that has really done it in for holy matrimony. Besides the free exercise of religion, marriage is the most important casualty of the media’s wholesale adoption of the gay agenda.

Newsrooms and studios in major cities are full of secular liberals who’ve learned from other secular liberals and were reared on tales of the Civil Rights movement and the crusade against racial injustice.

But Selma and the March on Washington happened more than 40 years ago. There’s no equivalent injustice today. So journalists have invented one.

In 2013, a Washington Post reader had the impertinence to challenge the paper’s wildly pro-gay coverage, resulting in an email exchange in which a Post reporter sniffed,

“The reason that legitimate media outlets routinely cover gays is because it is the civil rights issue of our time.”(emphasis mine.)

Further, the reporter condescended to explain,

“Journalism, at its core, is about justice and fairness, and that’s the ‘view of the world’ that we espouse …”

Note that the reporter’s “journalism” explanation said nothing about facts or about balance. Later in the exchange, the reporter revealed his dismissive attitude towards traditional marriage backers:

As for accuracy, should the media make room for racists, i.e. those people who believe that black people shouldn’t marry white people? Any story on African-Americans wouldn’t be wholly accurate without the opinion of a racist, right?

You, dear traditional marriage supporter, are no better than an anti-gay bigot, to be dismissed along with Klan members and segregationists. Support of same-sex marriage is not just the morally right position, but it’s the only one that that should ever be aired in polite company.

Judging by simple numbers, that arrogant, elitist Post reporter works at the right paper. In 2010, when same-sex marriage passed in D.C., The Washington Post ran 11 articles related to the law in one week, devoted 4 full pages in the paper to it, and quoted supporters of the law at a rate of 67 to just six opponents.

I am appalled by the Supreme Court decision allowing homosexual marriages. This decision will now result in causing many more to become homosexuals, which I believe is going to damn them in the sight of God. For those who believe the Bible, read what happened to Sodom and Gomorrah. We also know that before the great flood, the whole world became wicked enough for total destruction. This truly wicked Supreme Court decision proves that we are also as a nation probably worse off than Sodom and Gomorrah and ripe for destruction that will surely come. The progressive-liberal, welfare-minded base is gaining ground in the US, which is evidenced on why our nation would vote Obama into office -- twice. He openly condones the homosexual life style as well as every form of abortion including abortion at birth – yet somehow has the gall to profess to be a Christian proving to me that he is a liar as well. There are many prophecies concerning how wickedness will increase prior to the second coming of Christ. We have been warned particularly in the book of Revelation that the wicked will be burned when Christ comes to usher in the Millennium. This truly evil decision by the Supreme Court, as well as the decision to permit abortion, is a fulfillment of these prophecies. I feel so sorry for those who are addicted to homosexual behavior - and condoning murder by abortion - because they are making it very difficult if not impossible for themselves to repent and follow the true path that will lead them towards exaltation in the next life. Probably the next bad decision for the Supreme Court will be to allow gay and lesbian couples who are now legally married to freely adopt children and propagate their wicked lifestyle. The only hope that I have at this point is for the Second Coming of Christ to rid the evil in the world.

How did we get to this point? Four words: Intellectual dishonesty and hubris