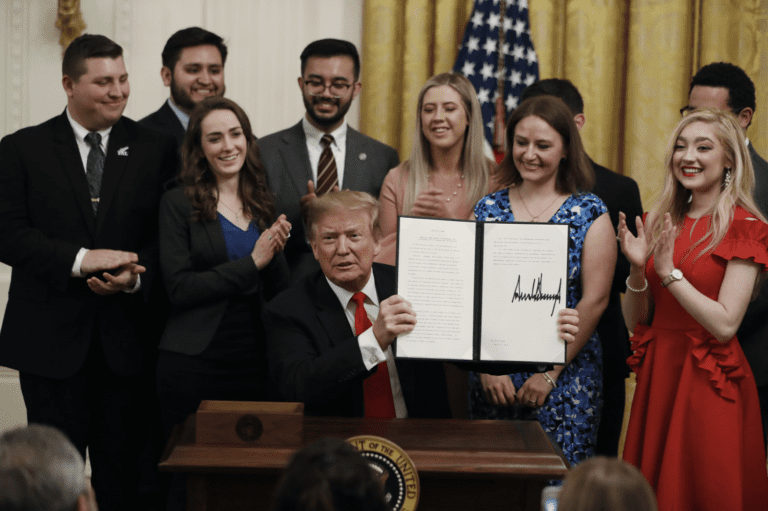 President Donald Trump didn’t reference religion in his new executive order on campus free speech, but that hasn’t stopped some advocacy groups from calling it a win for religious freedom.

Supporters say the order, which bans colleges and universities from receiving federal research grants if they fail to promote free speech, will ensure that religious students feel safe sharing their views on campus. At the signing ceremony, Trump was joined by students who said they’ve felt pressured by their schools not to speak out against abortion or discuss their faith.

“The real March madness? State universities that won’t follow the (First) Amendment,” tweeted the Becket Fund for Religious Liberty. “The White House (executive order) says they must do better. Agencies should ensure that any public schools discriminating against religious student groups are held accountable.”

The order will allow students to have the best college experience possible, said Mike Berry, chief of staff for First Liberty Institute, a law firm focused on religious liberty cases, in a statement.

However, some school leaders and policy experts say reactions like these make too much out of a mostly empty gesture. The order does not outline what represents a free speech violation and instead reflects in general terms on the value of free inquiry.

“This executive order is unnecessary and unwelcome, a solution in search of a problem,” said Ted Mitchell, president of the American Council on Education, in a statement.

Campus free speech has been a contentious issue for decades, but debates over whether campuses should disinvite controversial — and usually politically conservative — speakers have picked up steam over the last two years. Chaotic protests in response to such guests have made national news, and other institutions have been criticized for cancelling speaker appearances in an effort to avoid the same fate.