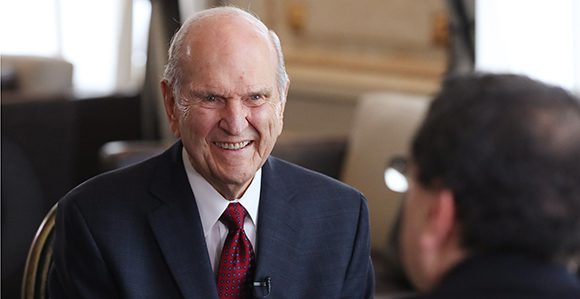 Editor’s Note: The following describes an interaction that took place on President Nelson’s recent five-country trip to South America. Among other appointments, he sat down for an interview with Sergio Rubin, Pope Francis’ official biographer.

An Argentine-based journalist and writer, Mr. Rubin had many questions for President Nelson.

President Nelson was confident with every answer.

“Many churches are ruled by men, at the exclusion of women,” said Mr. Rubin. “Is this the case for The Church of Jesus Christ of Latter-day Saints?”

“Well,” said President Nelson, “you should talk to a woman about that.”

“Can you help with this answer about the role of women in the Church?” he asked her. He motioned her into camera range.

Sister Dew told Mr. Rubin that he would have a hard time finding a church where more women have more authority than in The Church of Jesus Christ of Latter-day Saints.