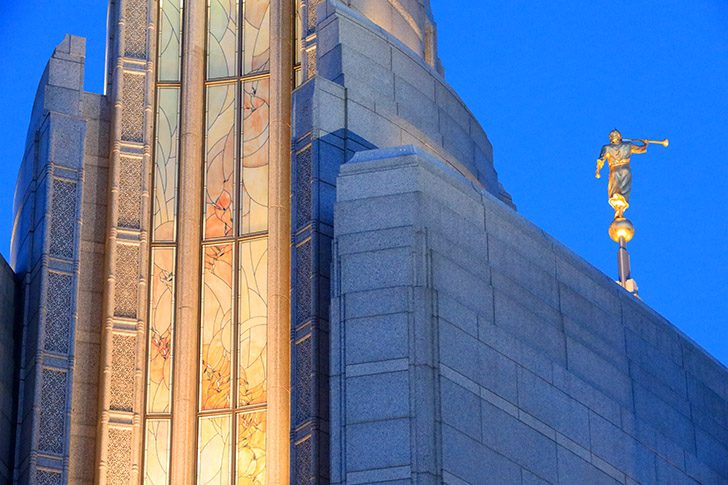 Photography in this article is by Scot Facer Proctor, except for photos by Julie Pacini and Ravell Call which are indicated.

In the October 2008 General Conference, President Thomas S. Monson announced five temples, but the one that made people gasp was the last. A temple would be built in Rome, often called the Eternal City.

The meaning did not escape the listeners. This was the city where the ancient apostles had preached and early Saints had been martyred, one of the center points of the early Church.  It was the first city where biblical events had transpired that would now have a temple, creating a resonating connection between the past and the latter-days.

One of those avid listeners was Niels Valentiner, an architect who had worked on several other temples for the Church. He thought, “If I were asked to do one of those temples, wouldn’t it be great?”

The next morning he received a call with an invitation to design the Rome temple. “We were all flying high for a long time,” he said, referring to his architectural firm. “From that day on we were talking about what the temple should be with over 100 different designs discussed.”

One thing they decided early on. “It took us about 30 seconds to figure out that we weren’t going to emulate St. Peter’s or some of the great Renaissance buildings,” he said. These are icons which mark the city of Rome as an international treasure. “At the same time the Church was very eager that it be an Italian project with Italian design precedents.” Since some of the most moving and enduring architecture marked the streets of Rome, this offered an excellent challenge for the architects.

He said, “In addition to being clearly Italian, we also wanted it to have some historic reference, including baroque design concepts, and we wanted it to look like a temple and have that temple feel about it, with those exceptional levels of excellence and craftsmanship,” he said.

“Americans don’t always understand what baroque architecture looks like, but Italians do. We wanted it to have that familiarity to them.”

Despite the many ideas the architects considered, it always came back to some original renderings that, early on, Niels, the consummate researcher, had sketched on the plane on the way home from a trip to Rome. The idea, in large part, came from Michelangelo and his design of the Piazza del Campidoglio, which was once at the heart of old Rome. This place was the most sacred point for the ancient Romans and probably also for the Etruscans when they reigned on Rome. When Michelangelo restored it, he created an oval or elliptical shape with a star in it that conveyed the idea of this being the center of the world.

Another inspiration was the oval church of San Carlino at the intersection of four fountains in Rome.

The design of the temple also became elliptical, with both inner and outer walls not based on right angles. In the temple, the star design is echoed in the floor, in the ceiling and in the carpeting. The second you walk in is a beautiful carpet, with an oval surrounded by leaves and inside the oval is the Michelangelo star. Italians seeing this recognize it immediately as Italian, which several people mentioned during the Open House.

This gives a refreshing and unique look to this temple. Niels said, “Elder David A. Bednar kept talking about the eternal round, the eternal connection and making reference to eternity and the eternal center. Elder Ronald A. Rasband asked me how we came to choose this pattern?”

Niels was tempted to say, “We just did.” But in actuality, he later reflected, “This was a 10-year and sometimes difficult project. Yet, looking back you see that there were so many dots that connected, which you don’t always see or appreciate at the time. Now I can see how the Spirit was working on this in quiet, tender mercy moments, which I mostly recognized later. Ideas, images and concepts kept coming to me clearly and were driving forces, even though I wasn’t thinking much about it at the time. Though we are always helped in our temple projects, of all the temples we’ve worked on, this has had the most spiritual influence and direction.

The elliptical shape feels like Christ is embracing you, Niels noted.

One of those inspirations that he didn’t see at the time, was when the architects submitted what they hoped was a working concept to the Church in multiple drawings that only had a single, east-facing spire. The Brethren looked at it and said, ‘we need two spires’ and those changes had to be made within a week.

“We were singing the blues over that because we had been working so hard and long on this,” said Niels, “but it became clear that two towers were important so you could see the temple with a spire from the east and from the west. All of this was part of the design process that improved what was eventually done.”

Niels not only had to think about the temple, but its setting as well “The design strength of the project is not only the temple, but also the Visitor’s Center, other buildings and the piazza between them. This 15-acre parcel had been owned by the Church for a long time and had featured a small olive grove. When the temple was built, these original trees were moved near the parking lot, and, for the piazza, olive trees were transplanted that are four and five hundred years old. Olive trees stand for peace and for the Garden of Gethsemane, which means “place of the olive press,” that place where Jesus was so pressed and crushed for our sakes.

One of the most commented and photographed part of this new Rome Temple Square is the Visitors’ Center with its Christus and 12 apostles, sculpted by Bertel Thorvaldsen. Niels said that it seemed there should be some way to symbolically represent the priesthood returning to Rome. He thought of making replicas of these statues which stand today in Copenhagen in the Denmark National Cathedral, yet there was a problem with that.

Most of the replicas you see of the Christus and the 12 apostles were copies of copies of copies, and once you have seen the real one, they look inferior. There was no true copy. To do something in marble at the desired level of excellence required a scan of the originals using modern technology and new precision. But how could he and his team ever pull that off?

Niels is Danish, so he has many connections in the country, but not what he needed. But it “just so happened” that he was driving in the car with someone who had just met an officer in the Danish church. Connections were made. Prayers and persuasion followed and Niels was able to travel to Denmark to get permission for the scans. The process of recreating the statues links the past with today’s technology for an affect in the Visitors Center which is undeniably stunning.

Thorvaldsen had created his original statues in Rome, and these copies for the Visitor’s Center were made from Carrara marble from the same quarry.

Another dot connected. “Something I envisioned and hoped for prevailed against all odds,” he said.

This elliptical temple in Rome, which will be dedicated this week, was driven by the Spirit, as well as faith and hard work. Line upon line.

The Church went all-out with this temple. Stunning.

We were blessed to be there for the open house of this amazing temple. It is so beautiful and awe-inspiring! The beauty is immediately recognizable as Italian in tone and design, which endeared it to the Italian people immediately.