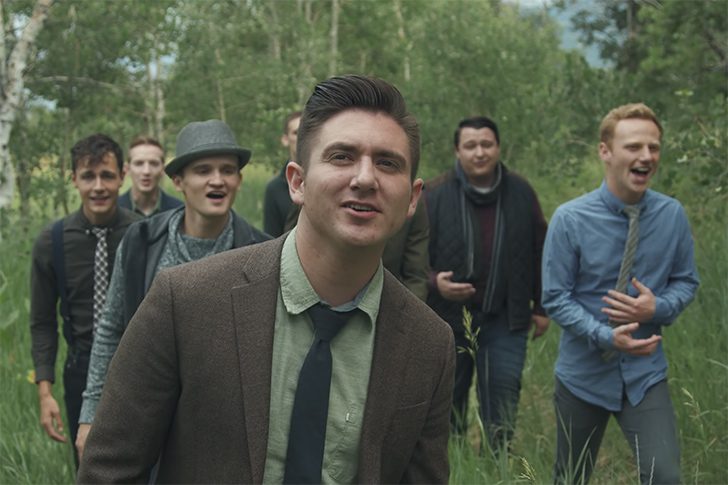 Seldom have we had so much fun or felt more pure energy in the room than when Maurine and I have been around Vocal Point—a small a cappella group of 8 or 9 male voices who sing everything, well, like you’ve never seen before.

Vocal Point was founded in 1991 by two students at Brigham Young University. They grew quickly to be very popular at BYU and with the encouragement of their success began to compete nationally. The 2005-2006 period was a banner year for them. The group appeared at BYU’s well-known Homecoming Spectacular, as well as its first BYU devotional. They won the regional semi-finals in the International Championship of Collegiate A Cappella and took their first tour to New York City. There they competed with some of the world’s best collegiate a cappella ensembles in the Lincoln Center’s Alice Tully Hall. In its first ever appearance at the finals, and after winning regional competition three times, Vocal Point took first place! They were crowned International Champions for 2006!

Of course, Vocal Point did lots of music video that were filmed on and off campus, but none that weren’t moving and full of enthusiasm and creativity. One of the groups’ singing members, McKay Crockett, took the reigns and helped them enter a new frontier. Not only did the group continue to innovate beyond any other group in collegiate a cappella with live performances (including the use of in-ear monitors), but with internet usage as well. A string of creative, energetic, powerful videos rocketed Vocal Point from a few thousand subscribers to nearly three-quarters of a million today. Their most popular video, “Nearer My God to Thee,” has more than 35 million views.

At times, when I need a lift, I will pull up a few Vocal Point videos and just lean back in my desk chair and feast. The selection today features BYU Vocal Point in a Josh Groban a cappella Cover. You’ll love this rendition of You Raise Me Up. Watch each person, but I especially get a kick out of seeing the percussionist who is giving all the drum sounds. Just relax for 4 minutes and let yourself have this treat. This video has had 23 million views. Thank you, Vocal Point, for lifting my life.

Thank you for sharing this. It is one of my favorite Josh Groban pieces and Vocal Point did a great job with it. I had goosebumps and tears