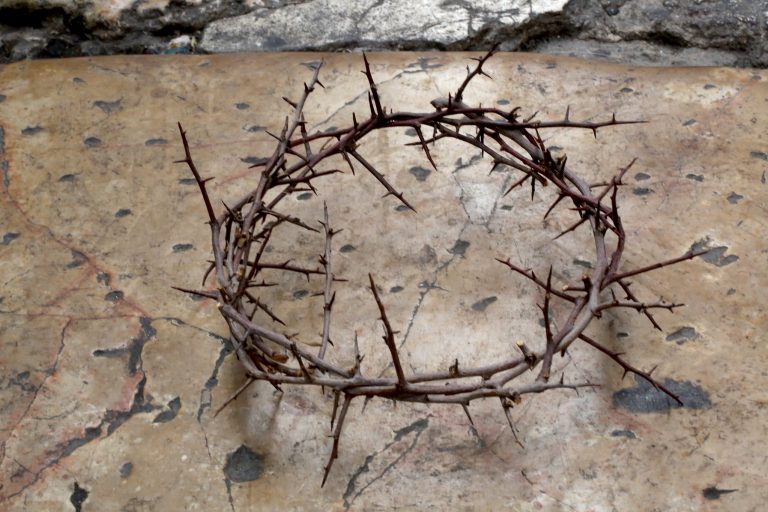 Hidden Things: The Crown of Thorns Meant More than the Mockers Thought

The following is the seventh in a series of articles giving greater detail from the stories behind the hidden things in our Treasures from the Life of Jesus jigsaw puzzle. If you haven’t gotten yours yet, BUY IT HERE.

There’s still time to get your puzzle by Christmas (inside the U.S.). For the next three days, all of our puzzles are on sale for $12 a piece. CLICK HERE.

It had already been a long, dark, and relentless night for Jesus when He was brought before Pontius Pilate, the Roman-appointed governor of Judea. He had been crushed at the “place of the olive press”—Gethsemane, and suffered for the pains and sins of the world and then mocked and smitten at the palace of Caiaphas. I can’t imagine the physical and emotional weight of the night He had already had when he was surrounded by a whole band of soldiers, who stripped him, put him in a scarlet robe, “And when they had plaited a crown of thorns, they put it upon his head, and a reed in his right hand: and they bowed the knee before him, and mocked him, saying, Hail, King of the Jews!” (Matthew 27::29)

It wasn’t until I most recently read these verses that I noticed that it says, “when they had plaited…”, meaning one of the soldiers sat and went through the potentially hazardous effort of weaving thorny branches together into a ring for the sake of this jest. Perhaps he was taken in by the mob mentality of the teasing and wanted to take it one further, but he didn’t realize just how significant what he was doing was. He didn’t realize that what he had made, probably not without pokes and scratches to his own fingers, was a symbol of the way in which the history and destiny of humanity was about to change forever.

First, let’s explore the significance of thorns, where they have previously appeared in scripture and what they represent. Thorns played no part in Adam and Eve’s idyllic Eden existence. It wasn’t until after they had disobeyed the Father and were cast out of the Garden that the Lord said, “cursed is the ground for thy sake; in sorrow shalt thou eat of it all the days of thy life; Thorns also and thistles shall it bring forth to thee; and thou shalt eat the herb of the field.”

Eating the herb of the field means cultivating it yourself, and thorns mean it won’t be easy.

As President James E. Faust said in an April 1991 conference address[i]: “I wish that I better understood all of the divine purposes in having to contend with so many painful irritants in this life. Lehi explained one reason: that we will appreciate and savor the goodness and loveliness of the world. Adam was told that the ground is cursed with thorns and thistles for our sakes. Likewise, mortality is “cursed” with the thorns of worldly temptation and the slivers of sin so that we can be tested and prove ourselves. This is necessary for our eternal progression.”

The purposes of our mortal sojourn couldn’t be fulfilled without the thorns, as much as we sometimes wish we could avoid them. Sometimes the thorn is a sinful behavior that we hope to just cover with a band-aid, but which won’t stop hurting us until it is fully rooted out. Sometimes the thorn is something outside of ourselves and our choices, that causes us pain anyway. In either case, the healing balm can only be found in the events of that night that Christ suffered so that we wouldn’t have to.

In an April 2011 article[ii] published in the then Ensign magazine, Larry Hiller shares an interesting insight about the crown of thorns pressed upon Christ’s head that night. He says that on a trip to the Holy Land, he was introduced the “crown of thorns tree”, and as he examined the sharp thorns nearly concealed by the leaves around them, he realized that though we often pictures a crown of thorns that is dried out and leafless, it is very possible that the person tasked with making it used green branches, making them easier to manipulate.

“In the ancient world a green, leafy crown or wreath—usually of fragrant laurel leaves—was often given to the winners of contests and battles,” says Hiller. “Laurel wreaths adorned the images of kings and emperors. Perhaps the cruel crown pressed down on the Savior’s brow was leafy and green in sardonic reference to that ancient honor. It’s just supposition, not a matter of doctrine. But for me, visualizing it that way brings one aspect of the Atonement more clearly into focus: the Savior is aware of our sorrows, and He is able to heal us.”

Even more significant to me was Hiller’s comment that, like the thorns on that tree that were at first unnoticeable, “So many of us bear unseen hurts. The hymn teaches that “in the quiet heart is hidden sorrow that the eye can’t see” (“Lord, I Would Follow Thee,” Hymns, no. 220). But the Savior does see. He is well acquainted with private anguish. His whole ministry was lived in anticipation of the Atonement and Resurrection. Yet those He taught and blessed and healed did not know. Even His own disciples remained unaware.”

Whether hidden or obvious, and whether from our own actions or the actions of others, the thorns that tear and prod and wound us are known of the Savior and he can heal us of them.

But let’s return to that soldier, plaiting a crown of thorns and not realizing the symbolism of what he was doing. Our general perception of this scene is focused on the irony that they dressed him as a king and mocked Him for its ridiculousness, while in reality He who stood before them was the King of Kings. But President Faust takes the symbolism of this moment one step further:

Perhaps this cruel act was a perverse attempt to mimic the placing of an emperor’s laurel upon His head. Thus, there was pressed down upon Him a crown of thorns. He accepted the pain as part of the great gift He had promised to make. How poignant this was, considering that thorns signified God’s displeasure as He cursed the ground for Adam’s sake that henceforth it would bring forth thorns. But by wearing the crown, Jesus transformed thorns into a symbol of His glory.

Thorns signify the pitfalls and pains of our mortality, but because of what Jesus Christ was willing to do for us, He made it possible for those weaknesses to become our strengths; and for our sorrows to become our glory. He made our thorns a crown.

For centuries leading up to that day, the stinging thorn of sin and the days and years of drowning in spiritual darkness had no hope for a light to reveal a better version of ourselves. For generations, the sharp sting of death had meant an end to one’s dearest associations with no hope of reunion. For all of time until this night, hearts that were broken by life’s unyielding thorns could never be fixed. But Jesus took those thorns and changed their very nature. Whoever plaited that crown of thorns created the perfect symbol of how the difficulties of this life are the very building blocks of our divine potential. And of how the one who lends us the transforming power to make it possible is Jesus Christ.

So, when you find the crown of thorns in our Treasures of the Life of Jesus jigsaw puzzle, remember that it wasn’t just a cruel gesture to mock someone that made claims that were greater than the people could handle, it is also a symbol of the moment in human history when pain turned to hope and disappointment to divinity.

Great article! I have another thought on the Crown of Thorns. It was a sign of Christ breaking the curse set in Garden of Eden so the earth will be renewed and receive its paradisiacal glory.

I appreciate the insights and also thought of the shepherds who watched the flocks of sheep. I understand a protective ring of thorn bushes (thorns) would be made to protect the flock from the wolves or other predators that may try to get at them during the dark hours of night or rest. It came to me we might look at thorns as being "protective" as we learn of their potential with life's experiences and can use such lesson to avoid the many "predators"trying to get at us as we continue the "good race". It's good to know both edges of the sword in order to avoid being "cut" too deeply.