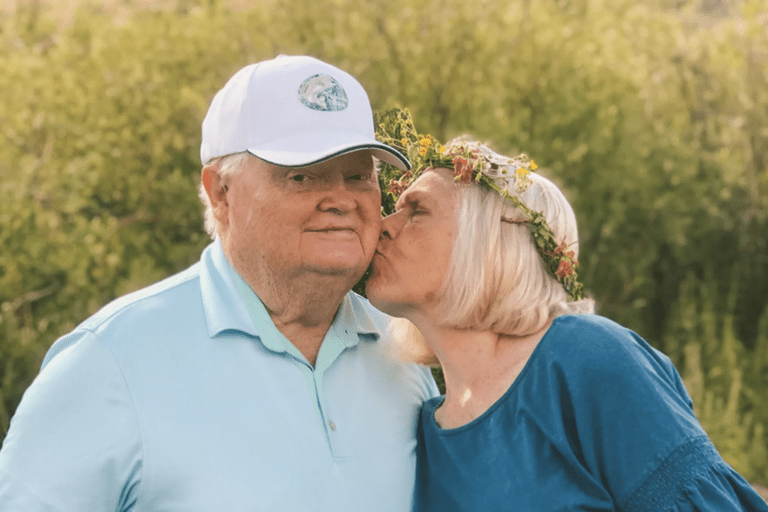 Kylee Keele-Blackburn felt her grandfather’s spirit throughout the party, but in retrospect, she now believes he was there, watching over them, because without their grandpa “guardian angel,” she may not be alive to tell the story of Christmas 2020.

A month before the Christmas party, Keele-Blackburn and her husband Slate Blackburn were the live-in caretakers for her grandparents. Hall, 81, and his wife of 61 years, Alberta, relied on Keele-Blackburn for nearly everything, especially as her grandpa became less and less mobile. Shortly after Thanksgiving, Keele-Blackburn said she started feeling sick and immediately went to the free testing offered to her as a Utah Valley University employee.

“I tested negative,” she said. “Then my sister started feeling sick, and she got tested a couple of days after me. She tested positive. So I went and got tested again, and I was positive.”

Keele-Blackburn moved to her father’s home to quarantine away from her grandparents and husband.

“I was hoping they wouldn’t get it,” she said. “As a caretaker, you have to choose between two impossible decisions. Do I take care of my grandparents? Or leave and hope they can take care of themselves?”

On Nov. 27 — Keele-Blackburn’s birthday — her grandfather tested positive. He went to the hospital just a few days later and ended up on a ventilator.

Even the decision to call an ambulance was difficult.

“We called an ambulance because his oxygen levels were extremely low,” she said. “But my grandmother didn’t want him to die at the hospital. She wanted to be with him, to hold him and love him. … We wanted to fight, but we wished we could be with him.”

When it came time to turn off the machine that was helping him breathe, only his wife and children were allowed to be with him.

Keele-Blackburn, who’d cared for him for 2 1/2 years, said goodbye from a hospital waiting room through FaceTime. None of his beloved 27 grandchildren got to touch or hug him in those final days.

On Christmas Eve, Keele-Blackburn discussed with her mother, Jennifer Keele, the fact that her younger sisters had gotten sick a week earlier. They thought it might be COVID-19, as they had headaches and some nausea.

“I asked her, ‘Do you have carbon monoxide monitors?’” Keele-Blackburn recalled. “And she said no. It’s not really something you think about.”