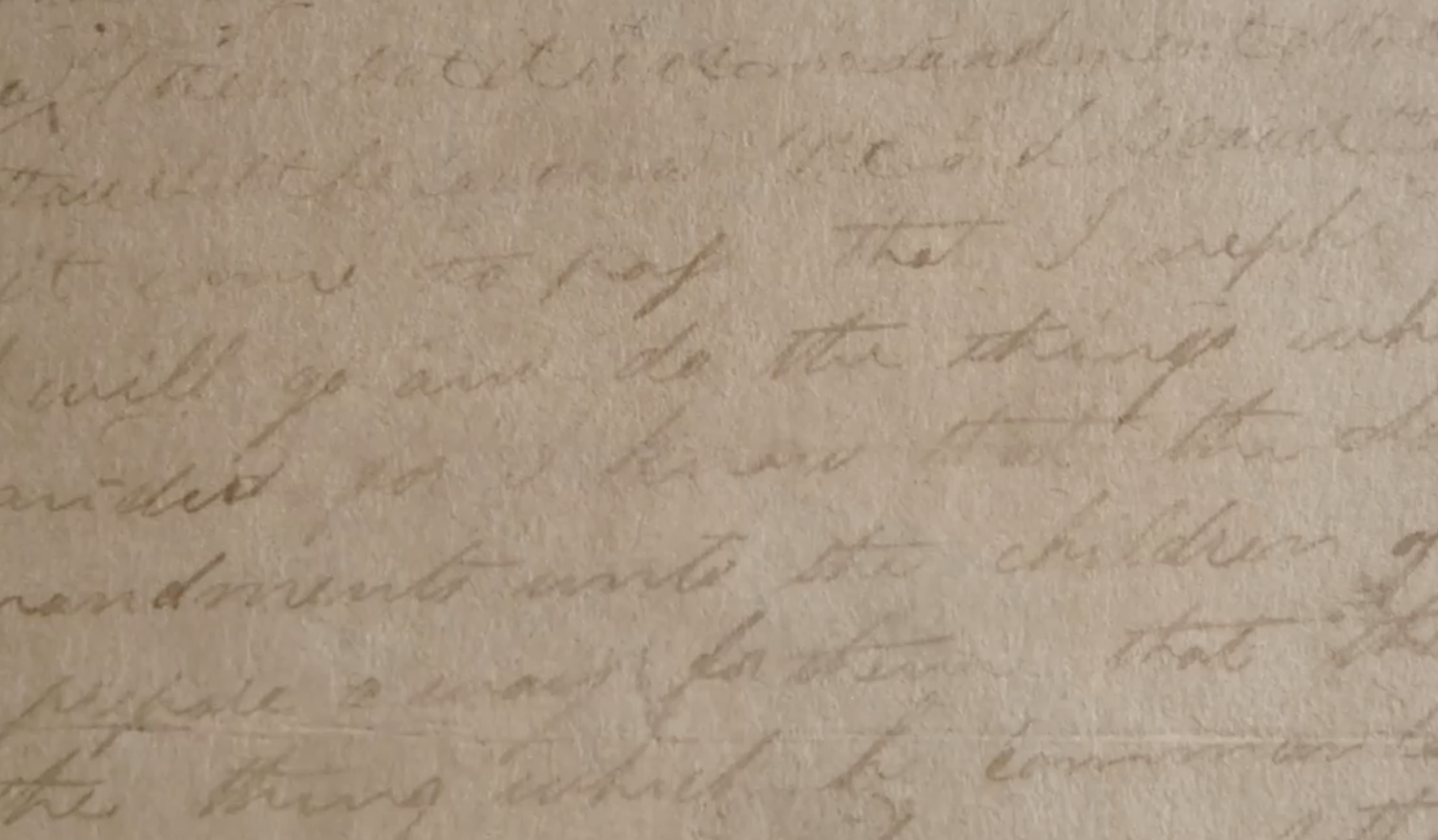 In 2009, Yale University Press released a volume under the title “The Book of Mormon: The Earliest Text.”  Why?  What on earth does that subtitle mean?  And what business does Yale have with the book that the Prophet Joseph Smith pronounced to be the “keystone of our religion”?

Quite naturally, most readers of the Book of Mormon probably assume that its modern printed English editions contain the same text that Joseph Smith originally dictated to his scribes in 1828-1829.  And they’re not far wrong.  But, in fact, even the first edition of the Book of Mormon (published in 1830) ended up with a considerable number of changes, including many that had entered the text during its dictation.  Most of those early changes were made when the scribes copied the printer’s manuscript from the original manuscript; but the 1830 typesetter, John Gilbert, also introduced many changes into the text.  Subsequent editions have continued to make changes, including numerous grammatical emendations that have sought to eliminate the nonstandard English that exists in the original text of the Book of Mormon. All these layers of change have resulted in a very complex textual history.

And that complicated textual history has led to a remarkable scholarly project that now spans nearly three and a half decades.

And, even now, Skousen’s work is not yet altogether complete.  Several massive and very scholarly publications, both electronic and in print, are slated to appear by roughly April 2023.  And then, at that time, we at the Interpreter Foundation hope to help him celebrate what surely ranks among the most impressive and sustained individual scholarly undertakings in the history of the Restoration.

A consummate scholar who has followed the evidence where it leads, Skousen has never tried to skew or spin things in a faithful direction.  Still, many of those who study “The Earliest Text” carefully have found it faith-promoting—as well they should.  For one thing, it illustrates the remarkable consistency of the text as Joseph Smith dictated it and the curious archaism of its language, and it even contains Hebraisms that have been edited out of official editions over the years because, although they exemplify good Hebrew style, they’re foreign to modern standard English.

With the help of the award-winning and nationally respected typographer Jonathan Saltzman, Skousen laid the text of “The Book of Mormon: The Earliest Edition” out in a page-wide column on each of the volume’s wide pages. It was divided into the standard verses, with the verse numbers placed visibly but unobtrusively in the left margin.  But, more than this, the verses were divided into multiple lines—“sense lines,” as Skousen called them—each line representing a significant, separate unit of thought.

Instead of breaking the text up into two columns of verses (as the current official LDS text does) or into paragraphs (as in the 1830 first edition), this format makes it so that each line of text ends naturally at the end of a phrase or clause. This is the only format that allows the reader to recover a sense of how Joseph Smith probably dictated the original text to his scribes in the late 1820s: his dictation would likely have been in sense-lines.  It may seem a small thing at first glance, but it substantially clarifies the flow of the text.  And it makes “The Earliest Text” exceptionally readable.

Moreover, coupled with its “sense-lines,” the superb physical characteristics of “The Earliest Text” also made it a wonderful version for simply reading the book through.  For example, it easily stayed flat on a table or a desk, even when opened virtually to the front or the back of the volume).  Thanks, again, to the collaboration of Jonathan Saltzman, this was quite deliberate.  It’s been a great study edition.

The 2009 Yale edition attracted significant attention from significant scholars, from both within the boundaries of the Restoration and beyond them.  For example, Stephen Prothero, a specialist in American religious history who holds the C. Allyn and Elizabeth V. Russell Professorship of Religion at Boston University, reviewed it in the “Wall Street Journal”:  “The product of over two decades of painstaking labor by Royal Skousen . . . this Yale edition aims to take us back to the text Smith envisioned as he translated, according to the faithful, from golden plates that he unearthed in upstate New York.”

It was “a defining, immediately essential work of rare scholarly achievement,” said “Choice,” the magazine of the Association of College and Research Libraries.

Writing in the “Journal of Ecclesiastical History,” Seth Perry, who currently teaches at Princeton University, told readers that “Skousen strips the text of its traditional formatting and presents it in ‘sense-lines,’ breaking what have been read as paragraphs of repetitive narrativeinto the phrases and clauses of something resembling epic poetry. The result of Skousen’s labors is a work of unique aesthetic and scholarly value, and an essential resource for scholarly approaches to the Book of Mormon.”

In his Introduction to the 2009 book, Grant Hardy, a Latter-day Saint and a professor of history at the University of North Carolina at Asheville, declared that “Royal Skousen has single-handedly brought the textual analysis of the Book of Mormon to a professional level on par with the finest classical and biblical scholarship. This volume is the culmination of his labors, and it is the most textually significant edition since Joseph Smith’s work was first published in 1830.  It takes us back to the original manuscript (as best we can reconstruct it) and sometimes beyond, to the very words that were first spoken by Joseph Smith to his scribes.”  Hardy later predicted in the “Journal of Book of Mormon Studies” that “Two hundred years from now . . . students of the Book of Mormon will still be poring over Skousen’s work. What he has accomplished is nothing short of phenomenal.”

But, clearly, it wasn’t only professional scholars who noticed.  “The Book of Mormon: The Earliest Text” went through five printings in hardback between 2009 and 2020—suggesting a level of sales that might understandably have caught Yale University Press somewhat by surprise.  (Academic presses have relatively little experience with high sales figures.)

It’s instructive to read the responses to the 2009 Yale edition of the Book of Mormon that appear on Amazon.com.

For example, a Virginia woman wrote that “This format makes my autistic daughter feel like she is reading shorter verses. She’ll read huge chunks, as long as they are composed of ‘short verses.'”  A reader in California reported that he had particularly enjoyed the sense-lines. “I have read the Book of Mormon many times,” he said, “but after reading a couple of chapters I was always ready to quit. With the Earliest Text, I started to read it at the beginning—and before I knew it, I was at Chapter 4. . . .  I didn’t feel (the) stress in my reading which I usually feel while reading the double-column version in the standard edition. . . .  I plan to always use the ‘Earliest Text’ for my daily reading.”

With all of the foregoing in mind, I’m very happy to call readers’ attention here to the fact that, on 10 May 2022, Yale University Press released the second edition of “The Book of Mormon: The Earliest Text.”  Unlike the 2009 edition, the new edition appears as a durable softbound, somewhat smaller in height and width, and, without sacrificing any content, only half as thick and only about a third as heavy.  The reduction in weight and thickness comes, in part, because of specially selected opaque paper that, although thin, allows readers to see a clean page of text without any interference from the printing on the reverse side of the page.

Many users of the first edition of “The Earliest Text” will be very pleased, as I am, at the handiness and easy portability of this trade paperback version.

Please note that it isn’t simply a reprint of the original hardback edition. It is a genuine second edition.  Please be aware, too, that the Kindleversion being offered at Amazon.com does not reflect the new edition but, rather, the 2010 second printing of the hardbound version, which is now textually inaccurate in a number of places.  Yale will, I hope, make a Kindle version of the new edition as soon as possible.

However, the actual scriptural text in this new edition remains the same as in the first (2009) Yale edition, and this new format continues to use the sense-lines of that first edition. When compared to the most recent printing of the hardbound Yale edition (the fifth, from 2020), only a few relatively minor changes in punctuation, capitalization, and sense-line breaks appear.  But comparison to the official Latter-day Saint edition will afford quite a few interesting surprises—although none of them affect fundamental doctrines in any way and, certainly, none of them cast doubt upon the inspired authenticity of the Book of Mormon.  (Quite the contrary, in fact!)

The appendix now contains 724 textual variants, five more than appeared in the appendix to the first edition. One interesting improvement is that the title page now begins with a significant change in the punctuation and a shift in the sense-lines, so that we now read that the Book of Mormon is “an account written by the hand of Mormon upon plates” and that this account was “taken from the plates of Nephi.”

The most striking difference in the new edition, besides its sturdy softbound cover and its somewhat smaller format, is that the 2022 trade paperback has a completely new introduction, written by Royal Skousen specifically for this edition. In his introduction, Skousen explains how the Yale edition derives from the Critical Text Project of the Book of Mormon that he has led for nearly thirty-five intense and meticulous years. The 2022 Yale edition of the Book of Mormon takes advantage of all the important findings of the Critical Text Project, including the following:

251 readings that make a difference in meaning

It is, in some ways, a delicate and audacious matter for a member of the Church of Jesus Christ of Latter-day Saints to peer carefully into the history of the text of our foundational document and propose changes to it.  After all, the ultimate authorities for the doctrines and scriptures of our faith are the apostles and prophets who have been called to lead the Church, not philosophers, scholars, or theologians.  They bear unique responsibility for our canonical texts.  And they have openly expressed their gratitude for Royal Skousen’s work:

Skousen does not claim to speak for the Lord or for the Church.  But he has approached the history of the English text of the Book of Mormon not only with the careful and scrupulous attention of a fiercely honest scholar but with the motivated dedication of a disciple, and he has created a marvelous resource for other disciples and, in fact, for all who want to appreciate the Book of Mormon more fully.  “The Earliest Text” will almost certainly change the way even experienced readers of the Book of Mormon perceive and understand the book’s sense and style. They will notice aspects of the book that they have previously overlooked. Their grasp of it will be enhanced.

As a reader from Michigan observed of the first edition of “The Book of Mormon: The Earliest Text” on the Amazon.com site, it “allows us to stand a bit closer to the words of the original revelation.”  For those who believe that God intervened to restore lost scripture through Joseph Smith in the early nineteenth century, there can scarcely be any higher commendation than that.

For casual readers of the second edition of The Earliest Text, it would be great to have a "redline" version, showing in-context changes to the official double column version of the Book of Mormon. Any chance of that?