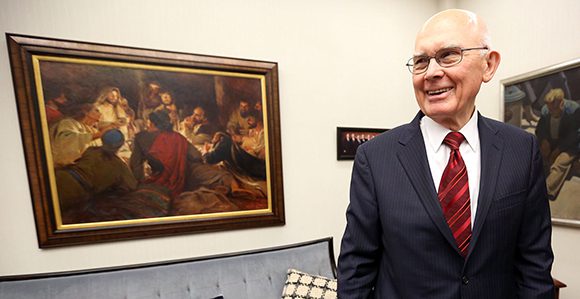 On April 6, 1984, Utah Supreme Court Justice Dallin H. Oaks was preparing for a confidential meeting with the Public Broadcasting Service board of directors. It was 9:30 p.m., and he was eating dinner in a restaurant in Arizona when he received a phone call from President Gordon B. Hinckley, then of the First Presidency.

“He told me to call him back when I got to my hotel room,” President Oaks recalled. “I assumed he wanted to know about something that happened while I was at BYU or someone I knew there” (Church News, Apr. 1984).

Upon returning President Hinckley’s call, he heard the Church leader’s words—that the Lord had called him, Dallin Oaks, to be a member of the Quorum of the Twelve Apostles.

“I was stunned,” President Oaks has said of the experience. After “13 sleepless hours,” it was announced to the Church—while he was on an airplane traveling to his meeting in Chicago, Illinois—that he would be a member of the Quorum of the Twelve Apostles. Church members sustained President Russell M. Nelson to the Quorum on the same day.

“When I got off the plane, I called home to see if it had really happened,” he recalled.

Nearly 34 years later, the seasoned Church leader has responded again to a prophet’s call to serve, this time in the First Presidency. On January 14, President Oaks was set apart to serve as First Counselor to President Nelson. (See related story.)