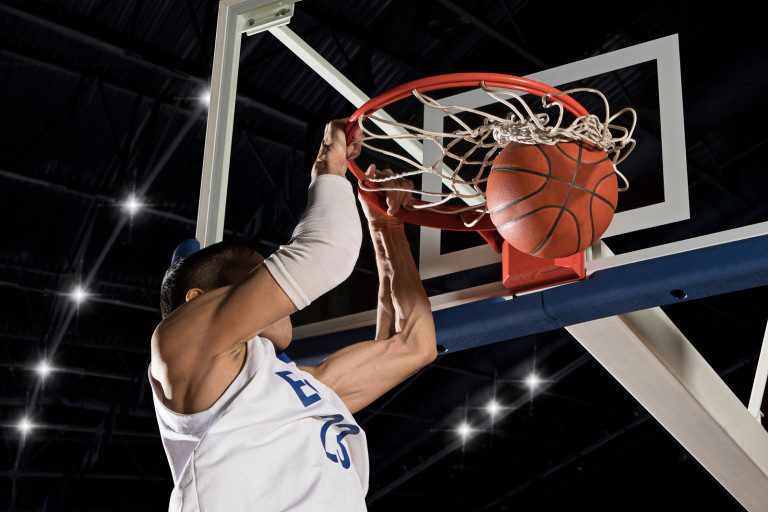 One day, when I was a freshman in high school, I arrived late to my P.E. class due to an early morning orthodontist appointment. The woman that oversaw several of the girls’ team sports was short – as in tiny. She took my “excused slip”, and tipped her head all the way back so she could look me in the face. “You’re tall,” she remarked. Yes. The story of my young life was short boys harassing me about my height. I was regularly called “skyscraper” and “jolly green giant.” The first question out of a new acquaintance’s mouth was invariably: “How tall are you?” The second? “Do you play basketball?”

That late arrival at P.E. made a profound impact on my years in high school. At my P.E. teacher’s invitation, I tried out for the girls’ basketball team, made it on, and found myself playing center. Other than my height, I was not a natural at basketball. I’m not a great dribbler, and it took me two weeks to master the lay-up, but I was a fast runner, my height gave me an advantage blocking shots and going up for the rebound, and I was enthusiastic team player.

We got a new coach my sophomore year. He also taught my sophomore English class. One day, some of the boys in class started giving him a hard time and trash-talking the girls’ basketball team. In response, he challenged those boys to a play-off between our team and those insulting boys. Now, these boys were not members of a basketball team, but they were athletic. Guys that regularly played pickup basketball for fun. The day was set. We would play in lieu of practice on the chosen afternoon.

Those boys cleaned our clocks. Even though we trained daily and practiced plays for hours, those guys were able to outplay us because they were bigger, faster and stronger.

Which brings me to my point: In games where athletic ability is enhanced by muscle mass and speed, guys may hold an unfair advantage over girls, especially in contact and collision sports. Despite that, in May 2016, the Justice and Education Departments in the Obama administration decided that under the Title IX amendments to the constitution, schools that receive federal funds must treat students’ gender identity as their sex in enforcing Title IX. There has been a lot of talk about the ramifications of this interpretation of the law with regards to bathrooms and locker rooms. All of which can be addressed with the availability of private facilities. But what does not have a politically easy solution, and which threatens to undermine the integrity of women’s athletics, is the admission of trans women in female competitive sports.

Already we have seen biological men that identify as female compete and win in athletic competitions against biological women. In June 2018, transgender athletes, Terry Miller and Andraya Yearwood, came in first and second in the 100-meter race at the State Open Finals in Connecticut. In October 2018, trans woman Rachel McKinnon won the UCI Masters Track Cycling World Championships, a women’s cycling event held in Los Angeles. Testosterone is a banned substance in competitive cycling. The question is, can a year of hormone suppression make up for the influence of a lifetime of male hormones? In 2014, transgender MMA fighter, Fallon Fox, sent Tamikka Brents to the hospital where she had seven staples applied to the wound on her head. Brents reportedly suffered a concussion and a broken orbital bone during the two-minute match. Said Brents,

“I’ve fought a lot of women and have never felt the strength that I felt in a fight as I did that night. I can’t answer whether it’s because she was born a man or not because I’m not a doctor. I can only say, I’ve never felt so overpowered ever in my life and I am an abnormally strong female in my own right,” she stated. “Her grip was different, I could usually move around in the clinch against other females but couldn’t move at all in Fox’s clinch…”

Few females can replace a male on a men’s contact sports team without having what would be considered extraordinary physical strength and athletic ability. However, a trans woman athlete, who is biologically male, is more likely to take away a girl’s spot on a girls’ team. The harm being done to women’s athletics and individual female athletes is stunning. This could conceivably lead to women’s athletic scholarships being given to biological men. Biological men will win women’s titles. Records will become meaningless.

The Trump administration hopes to right these wrongs by defining gender on the basis of biological sex. A recent memo from the U.S. Department of Health and Human Services contends that federal agencies should use definitions of sex and gender that are supported by “a biological basis that is clear, grounded in science, objective and administrable.” This policy could lead the way in other areas where the government uses gender in determining contracts and recognition such as set-asides. This would be a solid step in the right direction protecting women’s rights.

Many trans activists and news organizations are claiming that this rule attempts to “define transgender out of existence.” This is pure hysteria. Individuals will be able to continue to identify as which ever of the current 51 gender options offered by Facebook that they like. The civil rights of transgender individuals will not be abandoned. What it does mean is that biological women will not be replaced by biological men in athletics or any other area where recognition or award is granted specifically to individuals born with two x chromosomes.

Your voice is needed in defending the rights of biological women with regards to gender identity. Send an email today to the White House expressing your support of Health and Human Services applying a government standard in defining sex and gender that is grounded in science and that is objective and administrable. This is a good first step, but guaranteeing the hard-fought rights of biological women will take more than rectifying how agencies apply law. Administrations come and go. The Trump administration may change the way the government defines gender, but the next administration may change things back to the Obama era rules. Permanent change will require legislation defining gender for the purpose of government regulation. We need a government that recognizes the real, biological differences in men and women and codifies it using objective standards. Make your voice heard today. Do it for all the women athletes in your life.

Women welcome hard competition, but they want that competition to be fair. That’s what Title IX is all about. Please lend your voice to protect Title IX and women’s athletics.

Does anyone else find it strangely disconcerting that we are even having this dilemma? 51 versions of gender identification? Really? Whatever happened to common sense? What is next? Are we going to start debating whether we are looking at the sun or the moon, too?