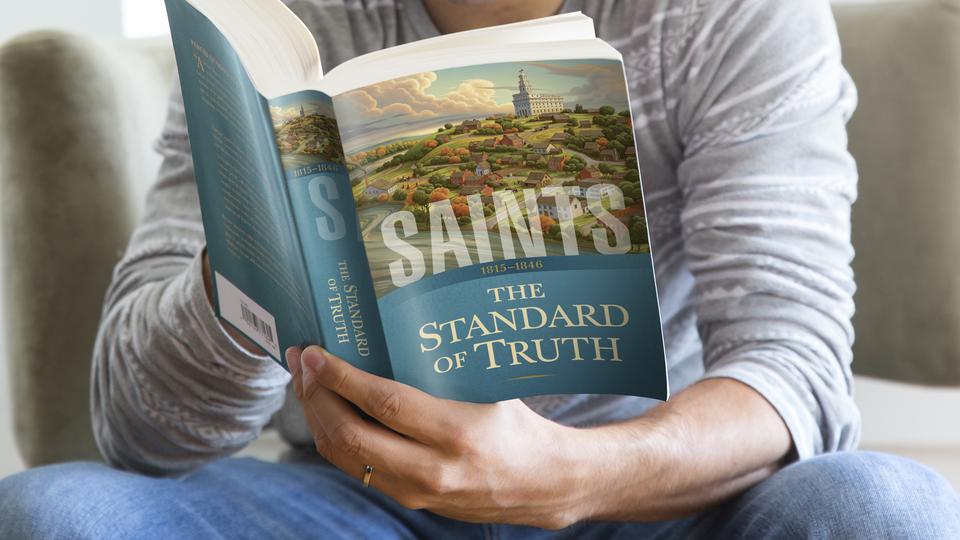 For only the third time, The Church of Jesus Christ of Latter-day Saints has released a new set of multivolume books about its history.

The first book covers key events in the early history of the Church and is available beginning today, Tuesday, September 4, 2018. The four-volume narrative history, titled “Saints: The Story of the Church of Jesus Christ in the Latter Days,” features authentic stories about the pioneers who established the Church around the globe.

“While the history includes exciting rushes of revelation that affect the whole Church, some of the most interesting aspects are the individual stories of faithful members,” said Elder Dale G. Renlund of the Quorum of the Twelve Apostles.

“‘Saints: The Standard of Truth’ has transported and inspired me as I read accounts of individuals who do and who don’t figure prominently in Church history,” added Elder Renlund. “These real-life experiences are threads in the beautiful tapestry of the Restoration. The Lord uses individual histories to teach us how to draw closer to Him, to repent and to be more like Him.”

When all four volumes are complete, they will cover a period of early Church history from before the First Vision to the present day.

“I have looked forward to this day for almost six years,” said Elder Steven E. Snow of the Seventy, who also serves as the Church historian and recorder and executive director of the Church History Department. “The ‘Saints’ project has been a labor of love for many, and it’s really gratifying to present this volume to members of the Church around the world.”

Elder Snow continued: “‘Saints’ draws on the power of narrative, but it is not fiction. It is a true story based on the records left behind by the early Saints and by others. Every detail and every line of dialogue is supported by historical references.”

The Church historian hopes the new series will appeal to younger readers. “With ‘Saints,’ we hope to reach a worldwide audience of Church members with a focus on speaking to those the scriptures refer to as the rising generation,” he explained.

The first volume of “Saints,” subtitled “The Standard of Truth,” tells the story of the Restoration, beginning in 1815 with Joseph Smith’s childhood, and concludes with Latter-day Saints worshipping in the Nauvoo Temple in 1846 before their exodus west.

“Over the next several years, the Church will publish three more volumes of the ‘Saints’ series,” said Elder Cook. “The team is hard at work researching, writing and editing these three books. We anticipate that all three will be published in the next four years or so.”

“As you read, you will discover new insight and meaning even in stories you have heard before,” said Elder Cook during a spring devotional at Brigham Young University–Idaho in Rexburg, Idaho, June 12, 2018. “‘Saints’ will help us keep covenants by enlarging our memories. It will help us to always remember what the Savior has done for us.”

Church historians researched and wrote each volume under the direction of the First Presidency.

“‘Saints’ is based on the records left behind by the early Latter-day Saints,” said Matthew J. Grow, director of publications of the Church History Department, who participated in the news conference. “These records — many of which were brought across the plains by the early pioneers — have been painstakingly preserved for generations. We are grateful to the archivists and librarians who have cared for these records over time and who do so now.”

“Our teams include historians charged with finding the best sources and understanding the best context, creative writers tasked with making the narrative engaging and editors who work to ensure that the book is accessible for our audience,” said Grow.

“We presented the characters as three-dimensional, with struggles and triumphs, with flaws and with virtues,” he said. “‘Saints’ also weaves into the larger narrative lesser known and potentially challenging topics. Readers will learn about the beginnings of plural marriage in the Church by hearing the perspective of Church leaders such as Joseph Smith, but also hearing from some of the women involved, such as Mary Elizabeth Rollins Lightner and Emily Partridge.”

“Some of our best diaries and letters and autobiographies and accounts that we have to draw on are from women,” said Church historian Lisa Olsen Tait, who is a review editor for the project. “There is no way that this Church could have survived and thrived the way it did without women, without women’s contributions and women’s involvement, and we’ve tried to show that down to the nuts and bolts of women’s contributions to temple building and moving and establishing the Church.”

The English print book is available in Church Distribution and retail outlets. The printed Church publication will be available in the following 14 languages by the end of the year: Cebuano, Chinese, English, French, German, Italian, Japanese, Korean, Portuguese, Russian, Samoan, Spanish, Tagalog and Tongan.

Joseph Smith commissioned and oversaw the writing of the first multivolume Church history in the 1830s, which was published beginning in 1842. The second history was published in 1930 by Church historian B. H. Roberts, before Church membership had reached 1 million.

Today, the Church has more than 16 million members worldwide. They live in 188 countries, nations and territories and speak many languages.

“We have sought to show the early globalization of the Church by following missionaries to Canada, England, Jerusalem and the Pacific,” said Grow. “We hope that readers get the sense of the global nature of the story from the first page, which begins with the explosion of a volcano in Indonesia.”

The 586-page volume is divided into 46 easy-to-read chapters. “Saints,” an official history of the Church, includes the latest historical research with some sources that weren’t available when the older books were published.

Volume two of “Saints,” subtitled “No Unhallowed Hand,” covers the Saints’ challenges in gathering to the western United States, ending with the dedication of the Salt Lake Temple in 1893. Volume three, “Boldly, Nobly, and Independent,” focuses on the global growth of the Church and concludes with the dedication of the temple in Bern, Switzerland, in 1955. The fourth volume, “Sounded in Every Ear,” brings readers to the recent past with temples located all over the world.

Written in a narrative style, the four-volume collection is designed to appeal to youth and adult readers. The content is supported by historical sources. Readers will find notes in the back of the book to refer to Church records and additional resources, including supplementary essays and videos.

“We encourage you to read it, trusting that it will assist you in understanding God’s plan, seeing how merciful the Lord has been, enduring faithfully in good times and bad, gaining Christlike empathy for others, and keeping the covenants leading you to exaltation,” said Elder Cook at the June devotional.

Elder Cook will host a Face to Face event for young adults on “Saints” September 9. The event will be broadcast live from Nauvoo, Illinois.