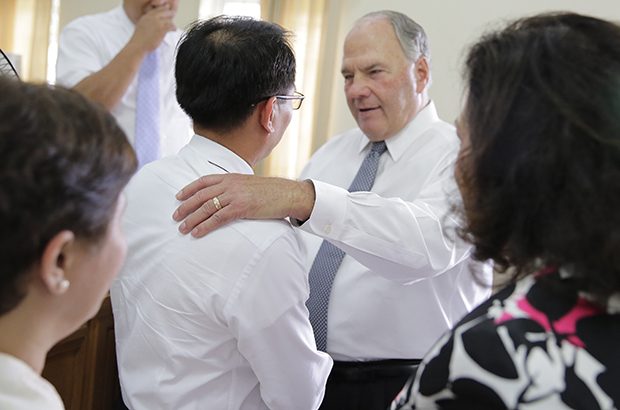 After standing on the sites of current and future temples in the Philippines and looking into the faces of some of the more than 750,000 Filipino Church members, Elder Ronald A. Rasband did not wait to share his impressions.

In a seven-minute Facebook live video—the first of its kind broadcast in the Asian nation by a member of the Quorum of the Twelve Apostles—Elder Rasband made an apostolic promise.

“This is just the beginning,” he said. “The Lord has great plans in store for the Church in the Philippines.”

The message had not been planned and was not scheduled. On February 23, sitting with his wife, Sister Melanie Rasband, and with members of the Church’s Philippines Area Presidency, Elder Rasband felt the need to reach out. “Let’s go live on Facebook,” he said.

Elder Shayne M. Bowen, a General Authority Seventy and President of the Philippines Area, said Elder Rasband immediately altered his plans. “Elder Rasband said, ‘I am calling an audible. Is it possible to do a Facebook Live event today?’”