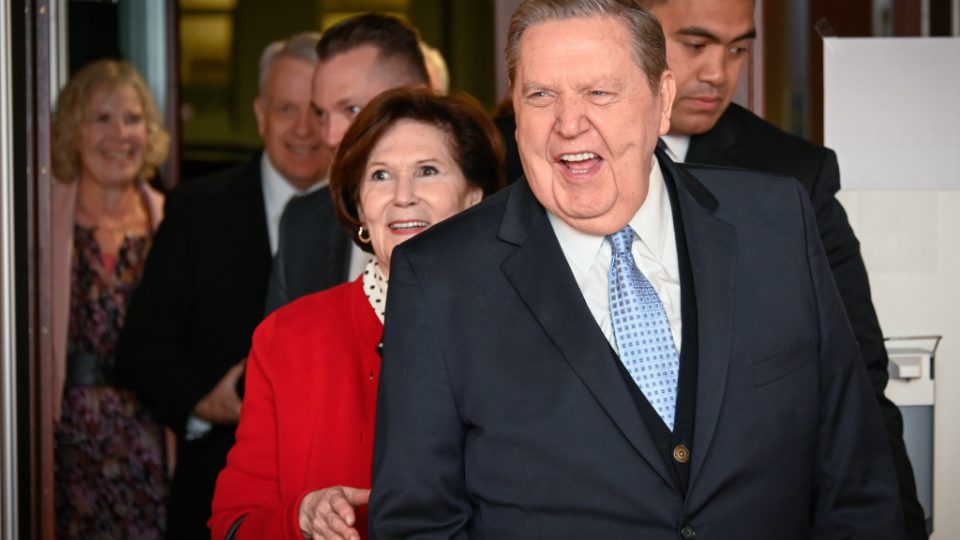 Speaking in the picturesque city of Hannover, Germany, located at the crossing point of railways and motorways in the heart of the country, Elder Jeffrey R. Holland offered a powerful testimony: “God is in our lives,” he said.

“I want to begin with the declaration that God loves you and He loves me. And he loves us in spite of our inadequacies and in spite of our mistakes …,” said Elder Holland of the Quorum of the Twelve Apostles. “We are asked to love Him with all our heart, might, mind and strength. The reason He can ask that is because that is the way He loves us.

“When you are in doubt, and when you are in need — and including when you do not have the answers to prayers that you thought you would have or wanted to have or pled to have or wept to have — remember, above all else, that God loves you the way He has asked us to love Him.”

Speaking on Nov. 4 to Latter-day Saints under the age of 35 — the first day of a three-country global ministry visit to Europe — Elder Holland turned his thoughts to his wife, Sister Patricia Terry Holland — who has ancestry in this part of Europe and who, a few years ago, was so ill doctors did not expect her to live.

“Maybe it is appropriate that in these lands, in the language of her roots and her origin, that she can be with us tonight — a testimony of the power of the priesthood, the love of God and answers to prayers,” said Elder Holland.

In the fall of 2014, Sister Holland went to bed with the chest cold and woke up the next morning unable to breathe.

Elder Holland and his children sat with Sister Holland for days as her lung capacity deteriorated to 15 percent. A pulmonologist who was also a Latter-day Saint asked Elder Holland to bring his family together. “We had doctors there, we had nurses there, we had technicians there, we had everybody there. They were all crying, except for her.”

Sister Holland was ministering, helping everyone she loves deal with what she thought would be an inevitability.

Elder Holland is not sure why his wife recovered and other people equally ill do not, why he and his family were granted the answer to their prayers. Or why some families do not experience a similar miracle.

But with his wife by his side, after traveling across the globe as a special witness of Jesus Christ, Elder Holland testified of miracles and God’s love.