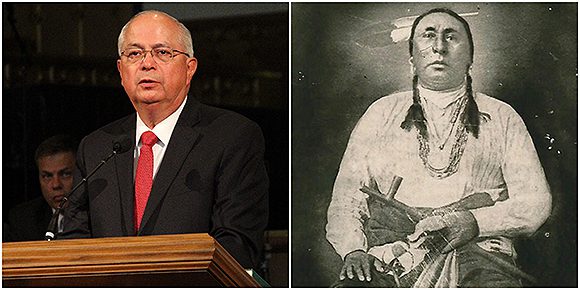 “I have felt the Lord’s hand in my life as I have progressed through many years,” Elder Echo Hawk said in a recent address at LDS Business College.

He said history was made in 1990 when he was elected Idaho’s attorney general—the first state constitutional office to be held by an American Indian in U.S. history.

Elder Echo Hawk said because of this election, he was honored as a BYU Distinguished Alumni in 1992. In attendance at the Homecoming festivities where he received this award were Dale and Jill Kirkham, a young married couple who had a powerful spiritual prompting they needed to help Elder Echo Hawk with his family history work.

When the Kirkhams later expressed this, Elder Echo Hawk thanked them for their interest in helping him but explained that this was impossible because the Pawnee Indians were not a record-keeping people.

“But they had planted a feeling in my heart about my ancestors,” Elder Echo Hawk said.

A few months later, he was invited to speak at a large banquet in Nebraska. He felt that he should accept and agreed on the condition that an expert would take him on a tour of the Pawnee lands—the homeland of his people—while Elder Echo Hawk was there.

On this tour, he traveled to Genoa, Nebraska, and was taken to a historical marker that explained the story of the expulsion of the Pawnee people to Oklahoma.

“Interestingly, it was a dual historical monument because on the other side of this marker was the account of another people that the government had failed to protect—another people that had been expelled from their homes in Nauvoo, Illinois: the Mormons.”

My great-grandmother taught at the Indian school in Genoa back in the 1870's. I have not been able to locate any school records but if they exist, maybe they could be digitized and indexed to help those seeking their ancestors.