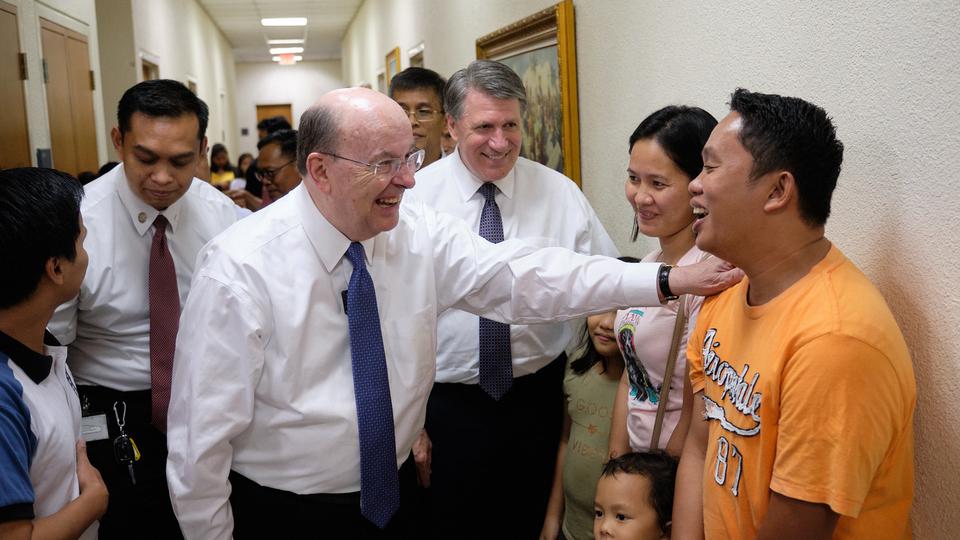 Elder Quentin L. Cook of the Quorum of the Twelve Apostles made an unannounced ministering visit on Wednesday evening to members of The Church of Jesus Christ of Latter-day Saints and others in communities near Manila, Philippines, affected by the recent Taal Volcano eruption. The apostle encouraged those taking refuge at local Church meetinghouses. Evacuees are not able to return to their homes because of the continued risk of the volcano erupting.

“I have visited people in a lot of circumstances where they’ve lost their homes in fires and other kinds of tragedies, and I honestly can’t remember a time when I’ve seen people who were quite as resilient and find a smile and [were] quite as happy,” said Elder Cook as he visited with a group of more than 180 individuals and families sheltered at the Batangas Philippines Stake Center, located several miles from the Taal Volcano.

“This is not the first time, and it won’t be the last time that you’ll see people caring for one another,” explained Elder Evan A. Schmutz, Philippines Area president. “You’ll see uplifted hearts, and they know that they’ll return and resume their lives.”

In all, there are more than 450 people being sheltered in five meetinghouses in Lipa, Batangas, Tanauan, Darasa and San Jose.

Among those Elder Cook met with was Jon Patrick Reyes, a local Latter-day Saint leader from the threatened region who has been leading evacuation efforts at the Batangas stake center. “We are still having people coming in,” said Reyes. “Some of them are members of the Church and some of them are not.”