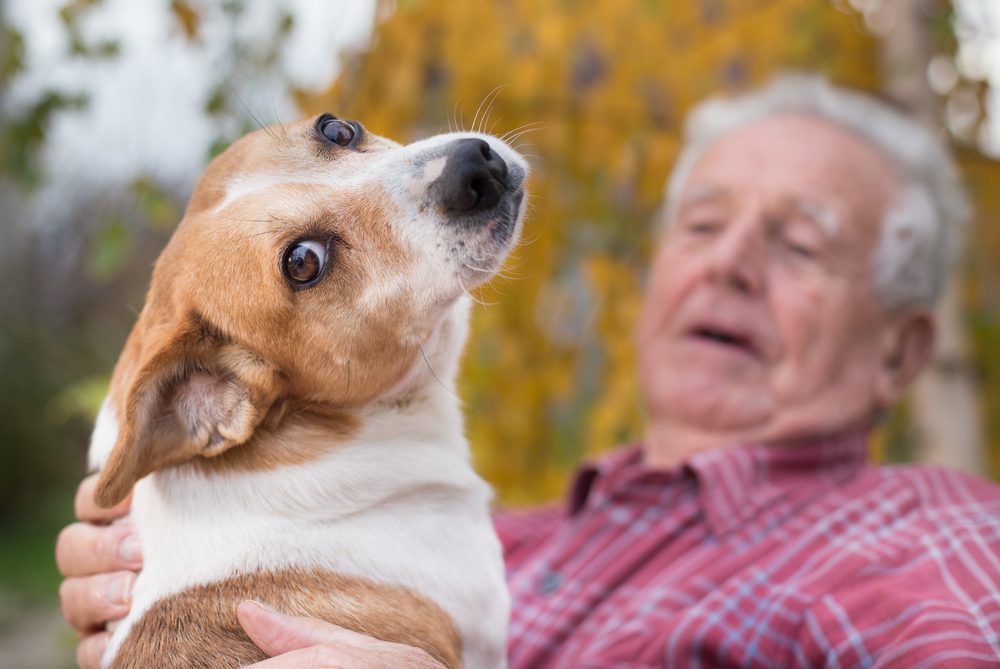 Gary had been through some tough times in his life, and Bo was just what he needed. Bo was a little rescue dog and the love he had for everyone came out in his wildly wagging tail. He was the friendliest dog Gary had ever seen. Just having Bo around, on the couch beside him with his head in Gary’s lap, made troubles fade away.

Gary would come home from a hard day’s work, and Bo would be there waiting to greet him. Together, they would go on a walk to relax, then come home and eat together. Bo provided the comfort and unconditional acceptance Gary needed.

But there was one thing that Bo kept doing that made Gary curious. When they went on their walk each evening, Bo would pause at the same fence. He would put his front paws on it and whimper. There was a big lawn with comfortable lawn chairs behind the fence. Gary knew it wasn’t the fence because they passed many like it. He wondered if it might be the green lawn, but they passed a park with Bo showing little interest.

Gary didn’t even know what the place was, so one day they walked around to the front of the building to find out. He learned it was a nursing home for elderly and disabled people. And what was interesting was that Bo seemed to want to go in. When they tried, Gary was told in no uncertain terms that animals, other than service ones, were not allowed in the building. Gary and Bo left, though Bo showed great reluctance to be led away.

They continued their normal routine, but one day Gary came home, and Bo was gone. He had somehow gotten a window up just enough to escape. Gary had kept Bo inside, afraid he would get run over or have something else bad happen to him. Gary felt his heart almost explode with fear when he realized his little dog was missing.

Gary ran out to the street and started calling for Bo. And it wasn’t long before Bo came running to meet him. Gary hugged the little dog and felt such great relief. But it soon became a daily occurrence. No matter how well Gary locked up the apartment, Bo found a way out. It seemed like he had learned to unlatch windows or open doorknobs. And every time Gary called, Bo came from the same direction.

One day, Gary decided to see if he could find out where Bo was coming from. So instead of calling, he hurried down the street. Gary felt some amazement to find the little dog standing with his paws on the fence of the nursing home courtyard, just as he did when they went on their walks. And that’s where Gary found Bo day after day.

Then one day, when Gary went searching for Bo, he got to the fence and Bo wasn’t there. But the gate into the yard was open, and the back door of the facility was slightly ajar. Gary entered and asked the first aide he met if she had seen a dog. The aide pointed to a room where there was a lot of commotion going on. There he found the facility director telling a lady in a wheelchair that Bo could not be there. But when the director tried to take Bo from the lady’s lap, the lady slapped the director’s hand. The director left, but not without a few terse words to Gary to keep his dog home. After a while of the lady petting him, Bo jumped down and was willing to go with Gary on his walk.

But no matter how hard he tried, Gary couldn’t keep Bo home. And Bo had also found diverse ways to get into the nursing home. Gary thought that some of the residents might even be opening their windows to let the dog in. One day, when Gary went to get Bo, he decided to just watch. Bo went from room to room, visiting the residents, and the residents seemed to relish his visit. But the director was especially angry.

“If you don’t keep your dog home, I will call the police,” she said.

“You give me the name of the owner of this facility,” Gary said. “I want him to see what I’ve seen.”

At first, she refused. But when he reminded her that the law required that anyone can contact those in charge, including the owner, she relented.

And Gary set out to see if he could make some changes he felt would benefit the residents there.

I have seen dogs react tenderly to the elderly and infirm. I am looking forward to reading what this precious dog does next.