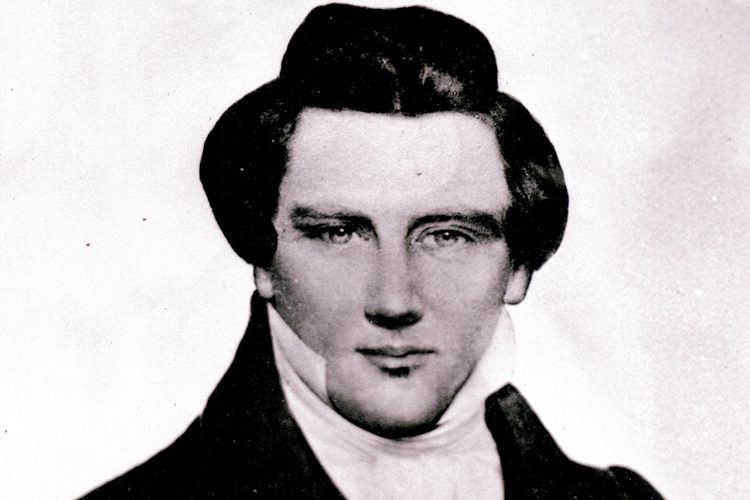 A number of Latter-day Saints like to discuss ancient America discoveries and how they might relate to the Book of Mormon. This is not new to the twenty-first century church but has been a topic of interest since the Restoration. Letters and journals from the 1830s indicate that many early Mormons—including Joseph Smith—were fascinated by any and all ancient American discoveries and, using their fallible human brains, tried to figure out if such finds were connected to the Book of Mormon.

Some early LDS critics took advantage of this interest and decided to set up a sting operation wherein they hoped to expose Joseph Smith as a fraud. In the spring of 1843, one of these men claimed to have had dreams of a treasure buried in a mound near Kinderhook Illinois. After sharing this story with a local Mormon, a group of men—including the Latter-day Saint—excavated the mound seen in the dream.

About ten feet down they unearthed some bones and six brass, bell-shaped plates that were engraved with curious characters. All of the men were excited about the find, but the Mormon in the group thought that this would help prove the authenticity of the Book of Mormon. Word and excitement about the discovery spread quickly—especially in the LDS community. The Saints were eager for Joseph to translate the plates. Although Joseph had a lot of other things going on, he did take possession of the plates for a little less than a week.

William Clayton, Joseph’s personal secretary, saw the plates, sketched them in his personal journal, and noted the following:

Prest J. [President Joseph Smith] has translated a portion and says they contain the history of the person with whom they were found and he was a descendant of Ham through the loins of Pharaoh king of Egypt, and that he received his kingdom from the ruler of heaven and earth.[i]

In 1909, when Clayton’s notes were included into the official History of the Church, the “Prest J. has translated” became the first person words of the Prophet Joseph Smith: “I have translated.” Nineteenth century biographers frequently wrote in the first person even if the subject of the biography never actually said the words attributed to him. Instead, early narratives often represented what others felt should be printed.

After the brief period that Joseph possessed the plates, they changed hands and virtually disappeared, only to resurface in 1920 at the Chicago Historical Society. For over one hundred and forty years after the initial Kinderhook discovery, several Mormon publications touted the Kinderhook Plates as New World evidence for ancient writing on metal plates. The problem is that the plates were a hoax.

Three non-Mormon men—critics of the Church—had manufactured the Kinderhook Plates in a local blacksmith shop, buried them in the mound, and then lured the Mormons into their trap. They were hoping that Joseph Smith might purchase the plates and create a detailed translation. Joseph, however, didn’t seem really interested in the plates. Unlike the papyri from which the Book of Abraham was “translated,” Joseph never made any attempts to purchase the plates, and never produced a translation. The closest thing we have to a supposed translation are comments from second-hand accounts.

These second-hand comments, however, have been all the proof needed for critics to claim that Joseph Smith was a false prophet because he made a translation of bogus plates. For well over a century critics and apologists (LDS defenders) have sparred over this issue. Then in 2012, at a FairMormon conference, LDS historian Don Bradley shared some much-needed light on the issue.[ii]

Joseph was always inquisitive. His early questions led to seeking an answer about which church to join. His questions about Book of Mormon teachings and teachings from the Bible brought new revelations and restored doctrines. But not all of his interests and speculations were answered by revelation. In many instances, he was left to work it out in his mind and was never given inspiration regarding the accuracy of his conclusions. He speculated, for example, about such things as Book of Mormon geography, the inhabitation of planets in our solar system, an Egyptian alphabet, and the relationship between Native American graves and Book of Mormon peoples. Undoubtedly Joseph also speculated as to the source and nature of the engravings on the Kinderhook Plates.

By examining various historical records Don Bradley discovered that several men (most likely non-Mormon) came to visit Joseph and were curious about the Kinderhook Plates. One of these men said that Joseph compared the characters of the plates with a character from the “Egyptian Alphabet.” The Egyptian Alphabet was part of a project known as the Kirtland Egyptian Papers (KEP). Part of this project was bound into a book and known as the “Grammar and Alphabet of the Egyptian Language” (GAEL) or the “Egyptian Alphabet.”

In the papers of that volume Joseph and his associates copied many of the characters from the Joseph Smith Papyri (the impetus for the Book of Abraham translation) and then attempted to connect those characters to the translation of the Book of Abraham. These characters were dissected into individual shapes, lines, and dots—each representing different characters. We have very little information as to what Joseph was doing and why, and the KEP and GAEL are still an enigma to modern scholars.

After spending time working with reformed Egyptian Joseph took an academic interest into other ancient languages. This interest brought him to study Hebrew, Greek, and German. It seems that the KEP/GAEL were possible attempts at discovering the pure Adamic language (of early Jewish and Christian lore) that was spoken by Adam and Eve. The “Egyptian Alphabet” seems to have been produced as a type of academic lexicon or Rosetta Stone which the early Saints hoped could be used to understand ancient languages. Joseph apparently turned to his copy of the GAEL (the “Egyptian Alphabet”) in order to make an academic (non-revelatory) comparison to the Kinderhook Plates.

Trying to find a matching lexicon-type character in the GAEL would have been as easy as turning to the second page of definitions assigned to characters. Here, the GAEL contains a character that looks almost exactly like a sideways “D” boat shape as well. Next to this character in the GAEL is the following definition: “honor by birth, kingly power by the line of Pharaoh, possession by birth one who reigns upon his throne universally—possessor of heaven and earth, and of the blessings of the earth.”

According to Clayton, Joseph translated a “portion” of the Kinderhook Plates (probably this single character) and said that “they contain the history of the person with whom they were found and he was a descendant of Ham through the loins of Pharaoh king of Egypt, and that he received his kingdom from the ruler of heaven and earth.”

Both Clayton, and the GAEL for this particular character, note the lineage of Pharaoh, both note the kingship, and both note that this power was acquired through “heaven and earth” (being descended from Pharaoh automatically would have made one a “descendant of Ham”). There is little doubt that the “translation” of this single character (“portion”) came from the GAEL which was used as an academic lexicon.

The Saints, and very likely Joseph, believed that the truth of the Book of Mormon might be proved by those things that would spring from the Earth, and in their zeal they tried to reconcile the discoveries of their day with what they believed about their newly-revealed scriptures. What Clayton describes as Joseph translating a portion of the Kinderhook Plates could not have been more than an off-the-cuff comparison of the obvious parallel between one of the most prominent characters on the plates with one of the early characters in the GAEL, and then reading the definition given for that character. This would not have taken him a matter of hours, but of minutes. The one-character match and the reading of its definition appear to be the extent of his engagement and “translation.”

Joseph spent much of his adult life in the pursuit of knowledge—both spiritual and secular—and had no qualms applying his secular knowledge to either the things he has learned spiritually, or in his secular attempts to understand the world around him. There is certainly no evidence that Joseph attempted to receive revelation regarding the Kinderhook Plates, and the entire incident simply demonstrates his academic and cursory interest in those plates.

[i] James B. Allen, Trials of Discipleship: The Story of William Clayton, a Mormon (Urbana: University

[ii] Don Bradley, “‘President Joseph Has Translated a Portion’: Solving the Mystery of the Kinderhook Plates,” at https://www.fairmormon.org/wp-content/uploads/2013/02/Don-Bradley-Kinderhook-President-Joseph-Has-Translated-a-Portion-1.pdf

Joseph often extemporized about ancient artifacts and people. His mom said he used to entertain the family with tales of the ancient Indians. When Zion's Camp came upon a burial mound he had a vision revealing that it held the remains of a white Lamanite named Zelph. When Joseph showed visitors the Chandler mummies and papyri, he shared grandiose back stories about the mummies' identities. To me, his comments about the Kinderhook plates seem more of this type than something he translated from the GAEL.

Informative and interesting article, but those who base their testimony on historical or scientific evidence are headed for a terrible stumble and eventual fall. Joseph Smith will not be proved or disproved a prophet (despite his human fallibility), by the secular mind. An unwavering testimony that he was a prophet of God and that the Book of Mormon is true scripture can only be obtained by an undeniable witness of the Holy Ghost, and that witness is available to everyone only on the condition of faith, repentance, and a willingness to live the complete gospel of Jesus Christ.