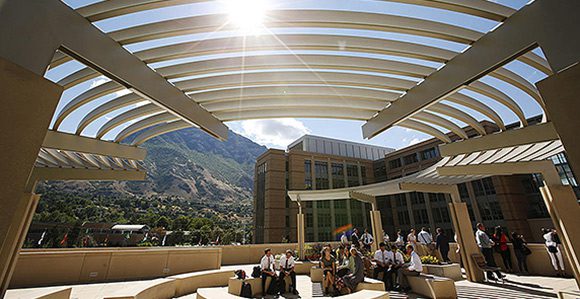 The completion and dedication of the Provo Utah Missionary Training Center expansion “marks a new era in the work that will accelerate,” said President Henry B. Eyring, First Counselor in the First Presidency.

“We speak sometimes of hastening His work as if we can change His time schedule by our effort,” said President Eyring, moments before offering a prayer of dedication on the new MTC facilities in Provo on Friday, October 13. “My guess is that we can neither delay nor accelerate His plan. But we can, if we listen to His Spirit, play our part to make His called messengers more joyful and more effective, helping them feel personally closer to Him as they serve in His cause.” Also participating in the dedication with President Eyring were Elder Dallin H. Oaks of the Quorum of the Twelve Apostles and chairman of the Missionary Executive Council; Sister Bonnie L. Oscarson, the Church’s Young Women General President who serves on the Missionary Executive Council; and MTC President David C. Martino. Sister Joy D. Jones, Primary General President, and Elder Brent H. Nielson, General Authority Seventy and Executive Director of the Missionary Department, offered prayers during the dedication, which was attended by Presiding Bishop Gérald Caussé, other Church leaders, and hundreds of missionaries currently receiving instruction at the Provo MTC.

During his remarks before dedicating the new buildings, President Eyring said missionary training centers “play a major part in the Lord’s great cause of taking the gospel of Jesus Christ to the children of Heavenly Father in all the world.”