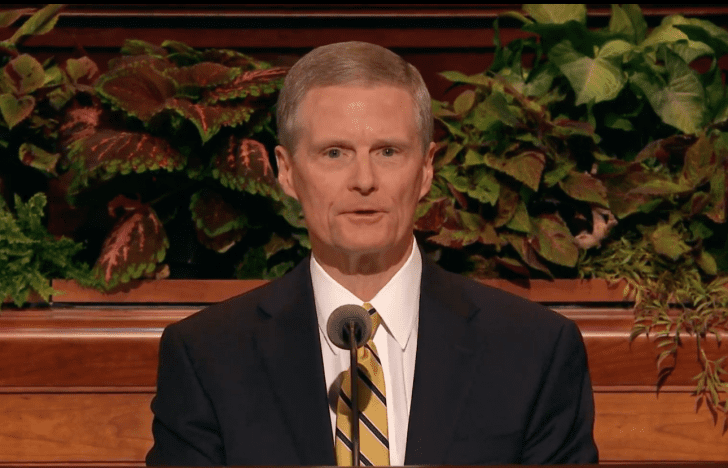 Elder Bednar Responds to Pandemic: “Never Again Must the Right to Worship God be Trivialized”

Speaking at the online only 2020 BYU Law School Religious Freedom Annual Review conference, Elder David A. Bednar said “While believers and their religious organizations must be good citizens in a time of crisis, never again can we allow government officials to treat the exercise of religion as simply nonessential. Never again must the fundamental right to worship God be trivialized below the ability to buy gasoline.”

He said that the COVID-19 pandemic has been a wake-up call about the fragility of religious freedom and has “presented us with a unique opportunity to reaffirm and shore up religious freedom”.

Elder Bednar made four reflections on “the nature of government and the importance and fragility of religious freedom.”

His first reflection: Government power can never be unlimited.

He said, “Constitutions, representative government, checks and balances, and the rule of law help constrain the tendency of government to exercise unlimited power. Of course, liberty has limits. Government has a just role in fostering a moral environment in which people can live good and honorable lives. But whatever else government officials may be called upon to do, we the people must never allow them to forget that their offices and powers exist to secure our fundamental freedoms and the conditions for exercising those freedoms.

“Thus, despite the obvious need for a proper response to COVID-19, we must not become accustomed to sweeping assertions of governmental power. Invoking emergency powers, government executives summarily imposed numerous orders and directives that in many ways are analogous to martial law. These executive orders are unlike laws enacted through the ordinary give-and-take of the democratic process.

“No doubt an emergency on the scale of COVID-19 justifies strong measures to protect the public, but we cannot lose sight of the fact that many of these measures are extraordinary assertions of governmental power that can dramatically constrain our basic freedoms. The power of government must have limits.”

Second reflection: Religious freedom is paramount among our fundamental rights.

Elder Bednar said, “This time of restriction and confinement has confirmed for me that no freedom is more important than religious freedom. The freedom of religion properly has been called our first freedom. It is first not only because of its placement as the first right in the First Amendment, but also because of the paramount importance of respecting the moral agency of each person. Living even for a brief few weeks under the restrictions imposed on religious activity by COVID-19 is a stark reminder that nothing is more precious to people of faith than the freedom to ‘worship Almighty God according to the dictates of our own conscience’ and to openly and freely live according to our convictions.”

He continued, “Freedom of religion stands as a bulwark against unlimited government power. It safeguards the right to think for oneself, to believe what one feels to be true, and to exercise moral agency accordingly. It secures the space necessary to live with faith, integrity, and devotion. It nurtures strong families. It protects communities of faith and the rich and sacred relationships they make possible.

Nothing government does is more important than fostering the conditions wherein religion can flourish.”

Elder Bednar said, “As we have just experienced, religious freedom can quickly be swept aside in the name of protecting other societal interests. Despite COVID-19 risks, North American jurisdictions declared as essential numerous services related to alcohol, animals, marijuana, and other concerns. But often religious organizations and their services were simply deemed nonessential, even when their activities could be conducted safely. In the name of protecting physical health and security or advancing other social values, government often acted without regard to the importance of protecting spiritual health and security. It often seemed to forget that securing religious freedom is as vital as physical health.”

Fourth reflection: In a time of crisis, sensitive tools are necessary to balance the demands of religious liberty with the just interests of society.

He noted, “I am not for a moment saying that religious freedom can be unlimited in the middle of a pandemic. Nor am I saying that all government officials have disregarded religious rights. Far from it.

“I believe we must always remember a key principle: specifically, religion should not be treated less favorably than analogous secular activities.

“For example, the orders of one state barred Catholic priests from anointing a parishioner with holy oil in the performance of last rites—even if the person was not sick with COVID-19, even if the priest and parishioner were protected with masks and gloves, and even if the oil was applied with a swab. In the same state, my Church could not perform baptisms even under the safest of conditions.

“This example and many more like it illustrate a profound devaluing of religion. We can and must do better.

“I also believe we must always remember a second essential principle: namely, policy makers, even in a crisis, should limit the exercise of religion only when it truly is necessary to preserve public health and safety.

“When the needs of society are great, officials should still ask whether there is some way of addressing those needs other than by burdening or banning the exercise of religion. With goodwill and a little creativity, ways can almost always be found to fulfill both society’s needs and the imperative to protect religious freedom.”

Elder Bednar concluded, “In our understandable desire to combat COVID-19, we, too, as a society may have forgotten something about who we are and what is most precious. Perhaps we have not fully remembered that faith and the right to exercise it are central to our identity as believers and to all that we deem good and right and worthy of protection. Now is the time for us to heed the wake-up call, to remember, and to act.”

The full text of his remarks are here. https://newsroom.churchofjesuschrist.org/article/bednar-byu-religious-freedom-review-speech#_edn14

Elder Bednar's comments are a wake-up call for all of us. I only wish this was given in a General Conference, so that everyone would hear or read it. We must cherish and uphold our freedom of religious expression, and we must speak out against religious oppression.