Come, Follow Me for Sunday School: “We Have Entered into a Covenant with Him”, Mosiah 18-24 | Meridian Magazine 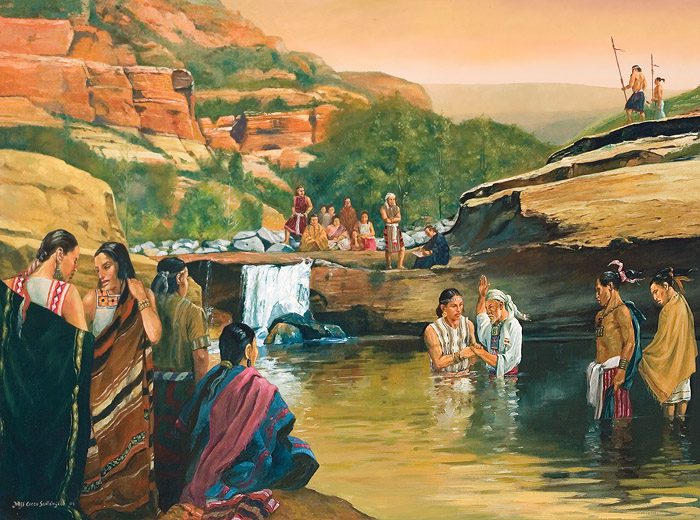 Come, Follow Me for Sunday School: “We Have Entered into a Covenant with Him”, Mosiah 18-24

What is the desire of your heart?

Mosiah 18 is famous for describing the baptismal covenant in great detail. The people who chose to follow Alma to the Waters of Mormon were ready to make beautiful promises to the Lord and in some ways to one another that would bless not only their mortal lives, but their eternities, as well.

But what made them make that choice? Or, better yet, what inspired them to take that step into the unknown and to do so in a way that was simultaneously one by one and together as a community of Saints? Well, the scriptures tell us right there in Mosiah 18. Verse 11 spells it out pretty clearly for us when it explains that, after Alma had outlined the specifics of the covenant of baptism, “when the people had heard these words, they clapped their hands for joy, and exclaimed: This is the desire of our hearts.”

In short, then, these people chose to be baptized because it was “the desire of their hearts.” From time to time, it would be good for us to take stock of ourselves and find out what the condition of our hearts might be.

So, what is the desire of your heart? What do you really want? And how does that translate into what you’re doing, what you read, what you watch, or how you spend your time? Those at the Waters of Mormon enjoyed a moment that comes for too few of us—a moment when the desires of our hearts and the words we speak and the actions we take are all in sync—a moment, in other words, when our hopes and dreams take shape in the living reality of our daily lives.

How often does that happen for us? Sure, there won’t always be epic moments of covenant-making in the wilderness with a renegade wicked-priest-turned-prophet. But each day, whether we’re doing the dishes or saying a silent prayer for someone we love, we can do more than just be aware of the desires of our hearts in some vague, dreamy background: we can live so that those desires—to mourn with those that mourn, to comfort those who stand in need of comfort, and to stand as witnesses of God at all times and in all things—come alive in what we do, and so in who we are, as well.

What to expect when we choose Christ

The Savior of the World is the Jesus of the New Testament, the Jehovah of the Old, and has power to do all things which are expedient in Him. So, if He is so powerful and can accomplish all of His purposes for His children, wouldn’t it be reasonable to expect that He would be able to do anything we need to make the lives of those who follow Him super easy?

Yes, it would be reasonable to expect this in any other circumstance, but it isn’t in the plan that God has outlined for us. As far as I can tell, He has never made the promise that the path of following His Son was completely free from pain, suffering, affliction, or hardship. His promises, on the contrary, are for joy, lasting peace and eternal family relationships. Many of our most bitter disappointments come when we expect that God will do something for us that He has never really promised He would do. “But I’ve kept the commandments,” we may say to ourselves, “so Father, you owe me peace, ease, comfort, or this or that thing that I really want!” We cannot earn blessings, for it is by His grace that they come. And we certainly cannot expect a life free of hardship, for His holiness and sanctification can only come as we turn to Him in the midst of our trials.

So it was with the people of Alma. Under the reign of Amulon, they were enslaved, forced to perform backbreaking manual labor and prohibited under pain of death to practice their religion freely. Yet, in the midst of all this, the people of Alma prayed in their hearts and, though the Lord did not lift their burdens immediately, He changed them so that they would be able to bear their burdens with joy.

Whatever burdens you may be facing right now, I invite you to pray that God will work a mighty change in you so that, even if the burdens are not taken away for now, you will be able to bear your burden that they will seem light to you. Such is the promise of the Lord to His covenant children. His peace, His strength and His might are all greater than whatever trials mortality can give us.

Do we ask ourselves “How many?” a little too often?

When we talk about Abinadi and Alma, we often compare how many people they converted, or, at least, how many people the Lord converted as a result of their preaching. I’ve often heard that, when discussing the value of Abinadi’s preaching, it often appears at first that he didn’t have much success because he only really affected one person. But that’s alright, some say, because that person went on to convert a huge number of people so, in a way, Abinadi was the means of bringing many people to the Lord, rather than just one.

This argument, on the surface, seems to illustrate that it doesn’t matter how many people we serve, only that the Lord was able to work through us in the process. But this way of seeing things doesn’t really say that at all. In fact, it’s really saying the opposite. Abinadi’s preaching was worthwhile, it says, not because he was obedient to the Lord or because he fulfilled his mission or died for the cause of Christ, but because eventually he affected a large quantity of people, albeit only eventually through Alma.

But what if it simply didn’t matter how many people Abinadi, or Alma, or any of us converted? What if the value of our service, preaching, or teaching had less to do with how scalable it was and more with how closely we came to hearkening to the voice of the Lord and being obedient to Him?

How many people did the Lord baptize during the course of His mortal ministry? In the parable of the talents, did the one who began with 5 and the other who started with 2 receive different rewards? In the parable of the laborers, did those who began in the morning receive a greater reward than those who began in the evening? What percentage of Lehi’s family or posterity believed in the message of the Gospel he preached? After all Nephi or Mormon or Moroni could do, how many of the Nephites continued to follow the Gospel of Christ rather than fall away into savagery?

My friends, all these examples suggest that it doesn’t matter how many people we affect, but simply that we do the best we can to serve and love those we know. Love your brother, your cousin, your mother. Be kind to those you come in contact with. Develop a close relationship with the Lord and follow the promptings of the Spirit. These things have much less to do with things you can see or stuff you can count and much more to do with who we and those we love are becoming.

Preach My Gospel put it best, perhaps, when it said, “Avoid comparing yourself to other[s]…and measuring the outward results of your efforts against theirs… You can know you have been a successful…[disciple]…when you:

When you have done your very best, you may still experience disappointments, but you will not be disappointed in yourself. You can feel certain that the Lord is pleased when you feel the Spirit working through you.” So, when you wonder whether you’re successful, I invite you to stop counting things so you can compare yourself to others, but instead to look to the Lord and together go over the ways of being in this list. How you feel as you do so will have more to do with your success as a disciple of Christ than how many people you’ve converted.

Thank you so much for sharing this insightful and to-the-point article. I greatly appreciate your thoughts and spelling your message out in a way that we can easily apply it to our lives and in a way that makes us DESIRE to do so :)