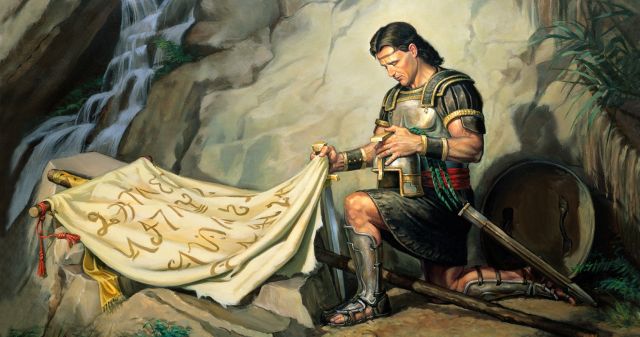 Cover image: For the Blessings of Liberty, by Scott M. Snow.

Some wonder at the war chapters in The Book of Mormon. If the trials we deal with are so unlike those faced by the warriors of old, why do we have to read about battles, stratagems, fortifications and war? Wouldn’t it have been better to have thrown in a few more Alma 32’s or 2 Nephi 31’s?

To some degree, we don’t know the whole story of why God included these chapters in the book that would usher in the Restoration of all things. It might even be healthy to step back and simply admit that all this stuff about war was meant for “a wise purpose in Him, which purpose we know not.” But as I’ve thought about it, one perspective has come to make sense to my mind and heart.

In some ways, we are at war today—not a war “against flesh and blood, but against…the darkness of this world, against spiritual wickedness (Ephesians 6:12).” The reality, if you think about it, is a little harrowing. Satan wants us to be “miserable like unto himself (see 2 Nephi 2:27)” and works in darkness in order to lead us “carefully down to hell (2 Nephi 28:21).” There really is no negotiating with him, no series of world summits or peace talks that will persuade him off his course. And so it is that, after a war in heaven to get ourselves here, we remain at war with Satan, a being hell-bent (pun intended) on our destruction. We didn’t ask for such a conflict, but as the hymn says, we are all enlisted ‘til this conflict is over.

But it isn’t all bad. In the end and along the way, we will win! And that’s for two reasons: first (and most importantly), the power of Christ is far greater than the power of Satan, who stands no chance against the Lord of Hosts; and second, as the Lord revealed in Doctrine and Covenants 58:28, the power to vanquish darkness is within us by virtue of our covenants and destiny as children of God.

Indeed, this is one of the major themes in these so-called war chapters of The Book of Mormon: namely, that each one of us has more power than we normally recognize within ourselves. And taking time to recognize that can give us a deeper appreciation of the scope of our daily decisions. Whether we choose to become closer to Christ or further from Him each day affects far more than our own destinies. C.S. Lewis wrote of this power:

“It is a serious thing to live in a society of possible gods and goddesses, to remember that the dullest and most uninteresting person you talk to may one day be a creature which, if you saw it now, you would be strongly tempted to worship, or else a horror and a corruption such as you now meet, if at all, only in a nightmare. All day long we are, in some degree, helping each other to one or other of these destinations. It is in the light of these overwhelming possibilities, it is with the awe and the circumspection proper to them, that we should conduct all our dealings with one another, all friendships, all loves, all play, all politics. There are no ordinary people. You have never talked to a mere mortal (C.S. Lewis, The Weight of Glory).”

These chapters of The Book of Mormon tell the parallel stories of two such men full of power: Moroni and Amalickiah. On the one hand, Moroni demonstrated the power within him as he helped preserve the people of Nephi in the face of almost insurmountable odds. So great was the power of the Lord as manifest in him and his deeds that, wrote Mormon, if all men had been, and were, and ever would be, like unto Moroni, behold, the very powers of hell would have been shaken forever; yea, the devil would never have power over the hearts of the children of men (Alma 48:17).” In other words, the power of God that lies dormant within even a single person has the power to, if awakened and spread among its peers, even overcome the power of the devil forever.

On the other hand, Amalickiah had great power, too. So cunning and manipulative and compelling was he that, almost entirely on his own, he waged a war that devastated the lives of an entire civilization. And so it was that Mormon wrote, “…we also see the great wickedness one very wicked man can cause to take place among the children of men (Alma 46:9).”

So, what made the power of one great and wonderful while the power of the other remained great and terrible? How can we discern between the potential greatness in ourselves that leads to light and that which could lead us and others into darkness? Here are a few lessons from the stories of Moroni and Amalickiah.

First, Moroni worked in the light. His message was clear, honest and straightforward. When he found the liberty of his people to be threatened, he made the Title of Liberty and spread the message abroad unashamedly. He taught as the Lord teaches in 2 Nephi 26:23, that is, that “the Lord God worketh not in darkness.”

On the other hand, Amalickiah accomplished his ends by fraud, subterfuge and deceit. He lied to get what he wanted. He killed to accomplish his goals. In the end, he followed Satan’s way from 2 Nephi 26:22, working almost entirely “in darkness.”

So, as we contemplate our works and our hearts in reading these chapters, we might ask ourselves, “Are the things I do things I’d like to see the light of day? Am I honest in how I go about accomplishing the things I need to get done from day to day? Are there some things I’d like to change, whether they be thoughts of my heart or works of my hands, so that I might make more of the power that is within me?”

Friends, I echo the promises of the Lord we quoted earlier: there is power within you. Whatever you’re facing, you can do it. You are not alone! Read Alma 26:12 again if you need to. Alone you may be weak, but with the Lord, the power within you can be awakened and you can accomplish anything. And there is no difference to him whether that “anything” is building a house for your family, working through an addiction, or improving your relationship with your mother-in-law. God is with you in this war and together we will win, so long as we are with Him.

Thanks Isaac for this article. As with your other articles I find it very easy to read and understand. I plan to remember this sentence you wrote 'Alone you may be weak, but with the Lord, the power within you can be awakened and you can accomplish anything.' Georgina