Come Follow Me for Sunday School: “I Speak unto You as If Ye Were Present”, Mormon 7-9 | Meridian Magazine 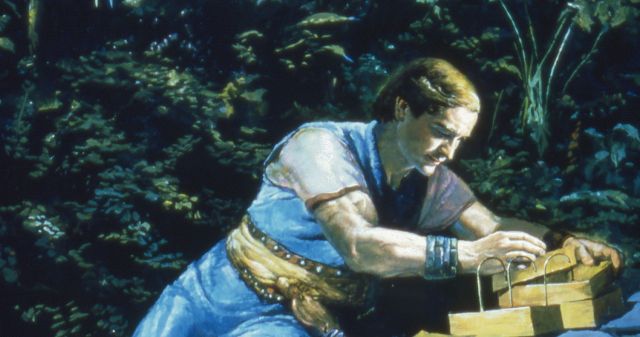 Come Follow Me for Sunday School: “I Speak unto You as If Ye Were Present”, Mormon 7-9

The first few verses of Mormon chapter 8 are some of the saddest I’ve ever read. To give some context, Moroni is writing on the plates after the great battle at Cumorah. All the Nephites who had escaped the battle (apart from him) were hunted by the Lamanites “until they were all destroyed.” His father was killed together with “all his kinsfolk.” Throwing probably the most well-deserved pity party of all time, Moroni wrote how he remained “alone to write the sad tale of the destruction of [his] people.” Everyone was gone, he lamented, and whether those ferocious men famous for eating the flesh and drinking the blood of their enemies would find him, he didn’t know. “Whither I go,” he said with depressing finality, “it mattereth not.”

And so it was that, with neither friends, nor family, nor hardly any hope to speak of at all, Moroni penned the words or Mormon chapters 7-9. As we spend some time with them, I invite you to remember the harrowing circumstances in which they were written and take hope that, no matter what damage the pandemic or anything else may have done to you, your family, your finances, or anything else, there is always room for hope, for truth, for comfort, for Christ.

Adorning Ourselves with “That Which Hath No Life”

In his solitude, Moroni was given the chance to see our day and, to be honest, it wasn’t pretty. He saw pride, sin, selfishness, greed and all sorts of terrible things. But one phrase he used stands out from all the rest. It came in the form of a question, which he asked of us “as though we were present.” “Why,” he asked, “do ye adorn yourselves with that which hath no life?”

I had a bishop back when I was studying at BYU who used to ask us the very same question. According to him (and I really think he was onto something), there are plenty of things in our modern world that have “no life” and plenty of things we do every day to adorn ourselves with them.

Today, as I’ve begun teaching at BYU, I ask my own students the very same sort of question throughout the semester. Which of the many things you’ve done today, I’ll ask them, will really last longer than a few days, weeks, or even years? These are the things which “hath no life.”

Not a lot of life there.

But what about teaching? Learning? Reading something? Building relationships? Spending time with family?

So, just as I’ve been asked before, so I ask my students now, “What have you done today that is filled with life? What have you done today that has the potential to last forever?” Precious little that we do day to day has that kind of potential. But as we orient ourselves to the Gospel of Jesus Christ and try to be like Him, living with and serving our brothers and sisters around us, our days will be filled with life and our characters made eternal.

God is Still a God of Miracles

Let’s not get too depressed about what Moroni saw about our day, though. There is still hope for us yet. A lot of things may have changed from Moroni’s time to this, but one thing remains the same: God was, is and always will be a God of miracles.

After young Joseph Smith saw God the Father and Jesus Christ in the Sacred Grove, one of the first reactions he heard from preachers in the vicinity was that his vision was impossible. There are no such things as visions and revelations in our day, they told him. Such things died away with the prophets and apostles.

But they were wrong—and Moroni knew they would be over a thousand years beforehand.

So, we know from him that God is still a God of miracles, sure. But there’s more here. There is a hidden invitation in Moroni’s pronouncement that God’s power still works among us today. It is in Mormon 9:20 when he describes why God stops doing miracles among us. “And the reason why he ceaseth to do miracles among the children of men,” he explains, “is because that they dwindle in unbelief, and depart from the right way, and know not the God in whom they should trust.”

In short, God’s power is enabled by our belief in Him, in our following Him and in our knowing Him. So, if we would see miracles in our lives and the lives of those we love, according to His will and timing, we must believe in Him, keep His commandments and get to know Him by studying Him and living as He lived. If we do these things, Moroni says, we have this promise:

“Behold, I say unto you that whoso believeth in Christ, doubting nothing, whatsoever he shall ask the Father in the name of Christ it shall be granted him; and this promise is unto all, even unto the ends of the earth (Mormon 9:21).”

Condemn Me Not Because of My Imperfections

Near the end of Mormon chapter 9, Moroni makes one of the humblest statements of scripture that I can think of. Rather than wax rhapsodic about how good he is at writing, or preaching, or even being a good human being, for that matter, Moroni here admits his faults and teaches us a valuable lesson in how to learn from our forebears in the great Gospel story. So many of us today spend precious time nitpicking and judging every little thing that every one of the Lord’s servants has said from the beginning until now, searching for the chinks in the their armor that would give us an excuse to leave a faith that never promised its leaders would be perfect, nor that its veracity hinged upon the moral rectitude of those who tried to live it.

Instead, we would do well to follow Moroni’s counsel in Mormon 9:31:

The imperfections of those around us, who came before us, or who raised us are not ammunition for accusation, bases for blame or hidden houses of hypocrisy. No, these imperfections are a blessing, Moroni explains, for those who come before us teach us both by their examples for good as well as in their pitfalls.

Is what we learn from Alma the Younger’s sermons in later life any more valuable that what we learn from his youthful follies fighting against the church? What lessons can we learn from Peter’s denial? Saul’s persecution of the Christians? Moses’ impatience? Jonah’s disobedience? Joseph Smith’s losing of the 116 pages? Rather than condemn these and other actions against the backdrop of what we assume is our present-day moral high ground, let us rejoice that both they and the Lord saw fit to leave these stories in the record that we might learn from them and in so doing both avoid the mistakes they made and fill the void their absence leaves with a goodness our fathers may never have known because of them.