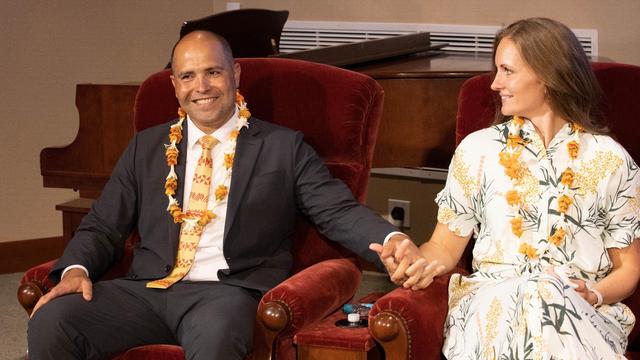 The Board of Trustees of Brigham Young University–Hawaii has appointed John “Keoni” Kauwe the university’s 11th president. Kauwe and his wife, Monica, will succeed John S. Tanner and his wife, Susan, who have served since 2015.

The announcement was made Tuesday, May 12, 2020, by Elder Jeffrey R. Holland of the Quorum of the Twelve Apostles during the weekly BYU–Hawaii devotional. The address was broadcast from the Church Office Building auditorium on Temple Square in Salt Lake City.

“We are grateful for [President Tanner’s] industry, his loyalty, his religious faith and his academic vision,” Elder Holland said. “We will miss both John and Susan very much. At some point we all will gather to sing ‘Aloha Oe’ to them.”

Dr. Kauwe is the dean of graduate studies at Brigham Young University (BYU) in Provo, Utah. He is an internationally recognized researcher who specializes in Alzheimer’s disease genetics. He has deep roots in Hawaii; spent several years of his childhood on the islands of Kaua’i, O’ahu, and Moloka’i; and graduated from Moloka’i High School. In recent years, the Kauwes have returned to Hawaii to visit relatives in the summer.

President Kauwe said the invitation to serve at BYU–Hawaii came from President Russell M. Nelson, President Dallin H. Oaks and President Henry B. Eyring — members of the First Presidency who also serve as officers of the BYU–Hawaii Board of Trustees.

This is wonderful, please bless him his family and the school. In the name of Jesus Christ Amen