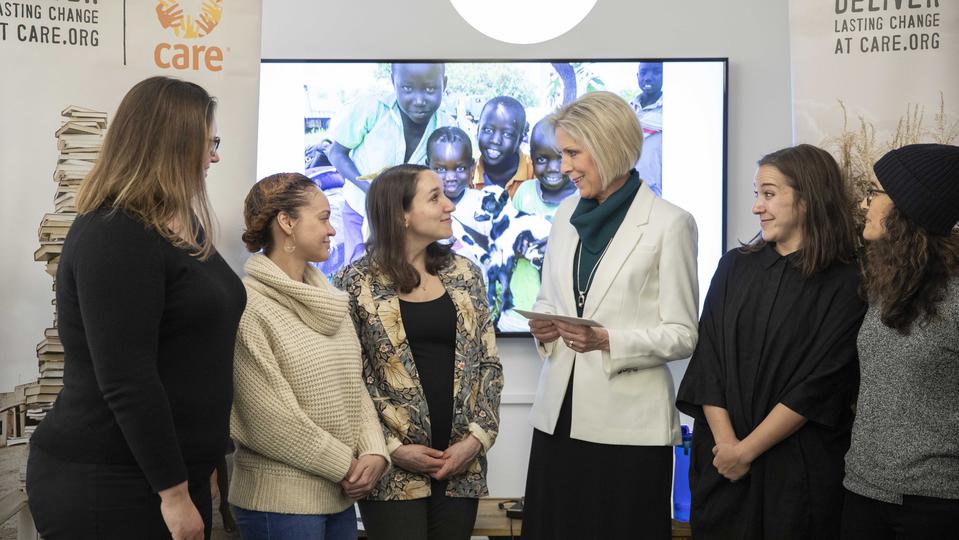 “Being able to help someone else makes people happy,” said Sister Joy D. Jones, Primary general president of The Church of Jesus Christ of Latter-day Saints, who traveled to New York City to deliver checks to several of the Church’s global humanitarian partners.

More than $2.3 million was raised through “giving machines” that were part of the Church’s Light the World initiative, which encouraged the public to serve others during the Christmas season.

The Primary leader was in Manhattan Tuesday, February 12, 2019, to visit the offices of CARE, WaterAid America and UNICEF USA.

“Thank you for the partnership,” said Caryl Stern, president and CEO of UNICEF USA. “Thank you for the spirit with which these machines were placed and for being with us today to present a check that’s truly going to make a difference in the lives of children all over the globe.”

“I am grateful to be able to say as members of the Church of Jesus Christ of Latter-day Saints that we honor the Savior Jesus Christ through service,” said Sister Jones, who leads the Church’s more than 1 million children, from age one to 11, worldwide. “And at this Christmastime, it was so remarkable to be able to see what happened with these giving through the Light the World campaign as people recognized the sweet opportunity to give.”

The large, red vending machines were placed at locations in the United States, the United Kingdom and the Philippines for people to buy items for those in need such as food and clean water.

“I feel like our values are very aligned, that the focus is really on the mission of what we’re trying to achieve together,” said Sarina Prabasi, CEO of WaterAid America.

One hundred percent of the donations are being used to purchase nearly 843,000 meals, more than 16,000 medical and health supplies, close to 11,000 clothing items and household supplies, nearly 20,000 chickens and nearly 4,800 goats.

Donors who purchased the chickens, goats and other livestock supported the programs of CARE, an organization created in 1945 to send food or care packages to survivors of World War II.

Monica Merlis Matthews, director of community partnerships at CARE, finds the giving machines an innovative approach to fundraising. “To see really how it has resonated with people and brought people in and introduced people to philanthropy and in new ways, it’s so exciting, and so we’re honored and privileged to be a part of it.”

“Just a huge, huge thank you,” expressed Lina Bonova, executive director of CARE’s northeast region. “I think it’s really important for each and every person [who] made the trip and selected the chicken and the goat. It’s so important, so humble just to see this huge support, and it makes a huge difference in the field every day.”

“It’s made a difference to children,” said Leslie Goldman, vice president of global cause partnerships at UNICEF USA, who reported that the donation will be used to vaccinate 320,000 children against polio, as well as buy jump ropes and more than 3,500 soccer balls.

“Just think of how many soccer teams are out there having fun and experiencing the joy of childhood thanks to the giving machines,” said Goldman.

In addition to the Church’s donations to its global charity partners in New York, contributions were also distributed to local organizations in New York City, London, Manila, Gilbert and Salt Lake City.

Sister Sharon Eubank, a counselor in the Relief Society general presidency and director of LDS Charities, made stops in Salt Lake City at the Utah Food Bank, Eye Care for Kids and the Refugee Connection on Thursday, February 7.

“We’re so thankful for the spirit of giving and love that happened,” said Sister Eubank in a Facebook video.

“Thank you for lighting the world,” added Sister Eubank. “You can light the world in so many small ways. And as we continue to feel that spirit of giving that we [felt] at Christmastime, look around and see other places and people who might need you and have that spirit all year round.”

“It’s the everyday things as individuals going forward and finding ways to lift and help others [through] small and simple ways all throughout the year,” encouraged Sister Jones.