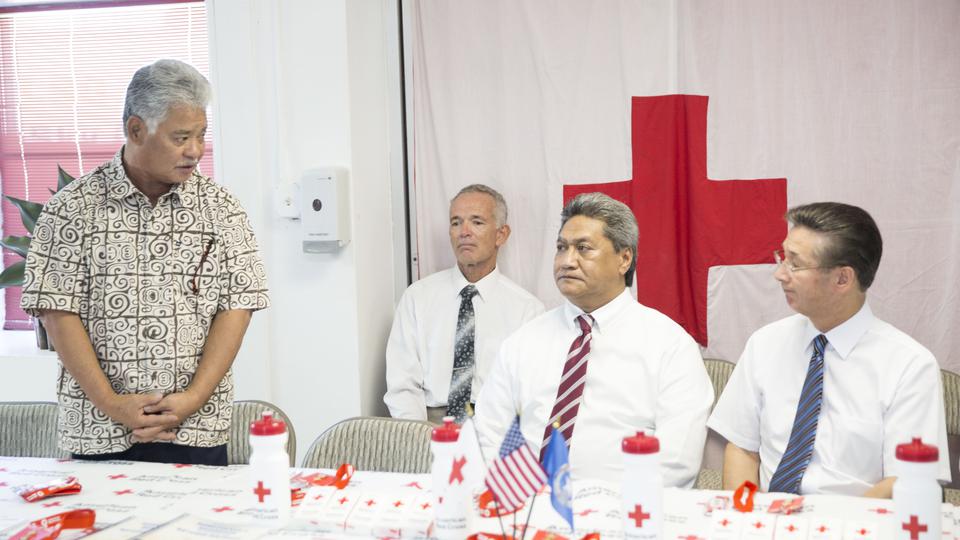 LDS Charities, the humanitarian arm of The Church of Jesus Christ of Latter-day Saints, has joined with the American Red Cross to assist with typhoon recovery efforts in the Northern Mariana Islands.

The Church has donated more than $1 million to the Red Cross in disaster relief after Typhoon Yutuslammed into the islands of Saipan and Tinian on October 25, 2018, the strongest tropical cyclone on record to ever hit the area. The islands, located in the central Pacific, are a commonwealth of the United States.

“We are so grateful to be able to partner with the American Red Cross office in Saipan to help those in need following this disaster,” said Elder William H. Davis, an Area Seventy. “We are grateful to help those who were affected by this devastating storm.”

Church leaders met with Red Cross officials in Saipan January 24, 2019, to discuss the use of the donated items to support the residents following the natural disaster.

The Church provided $10,000 in cash to cover fuel and supplies for volunteers immediately following the storm. In November, $100,000 worth of commodities were sent to the area. In December, $900,000 was spent on relief supplies and the deployment of emergency personnel.

Residents of the isolated island of Tinian and the southern villages of Saipan experienced sustained winds of 170 miles per hour with gusts of more than 200 miles per hour. All 1,100 homes on the island of Tinian were damaged or destroyed. Yutu also severely impacted the infrastructure of the islands, disrupting the availability of food and clean water, as well as safe shelter. The storm also caused massive power outages.

“I’ve been through many storms while living in Saipan, but Yutu was particularly scary for me and my family,” said John Hirsh, executive director of the Red Cross in the Northern Mariana Islands, who rode out the storm in his home with his wife and daughter, sheltered in an interior room with no windows.

Hirsh explained, “At daybreak, we ventured into our main living space to find a huge mess. All our furniture, dining table, chairs, sofa and bookshelf were completely soaked with water. Many of our family photos and mementos were smashed on the ground. … There were a dozen trees blocking my driveway.”

The American Red Cross is the leading nonprofit response agency in the Northern Mariana Islands. With the support of LDS Charities and other partners, the response was scaled up to support these communities, who are also working with federal and local government agencies.

“The Red Cross is proud to count LDS Charities as a partner as we work together to provide thousands of people throughout the Northern Mariana Islands with much-needed support,” said Don Herring, chief development officer at the American Red Cross.

In the immediate wake of the storm, the American Red Cross provided essential relief supplies, such as tarps, drinking water, lanterns, mosquito netting and meals. Financial support was also provided to families whose homes were either destroyed or had major damage. This disaster relief operation proved challenging with the airports and seaports closed.

Part of the mission of LDS Charities is to relieve suffering following natural disasters, civil unrest or famine around the world. When local resources are strained or nonexistent, the Church provides short-term, life-sustaining resources such as food, water, shelter and clothing, as well as medical, school and hygiene supplies.