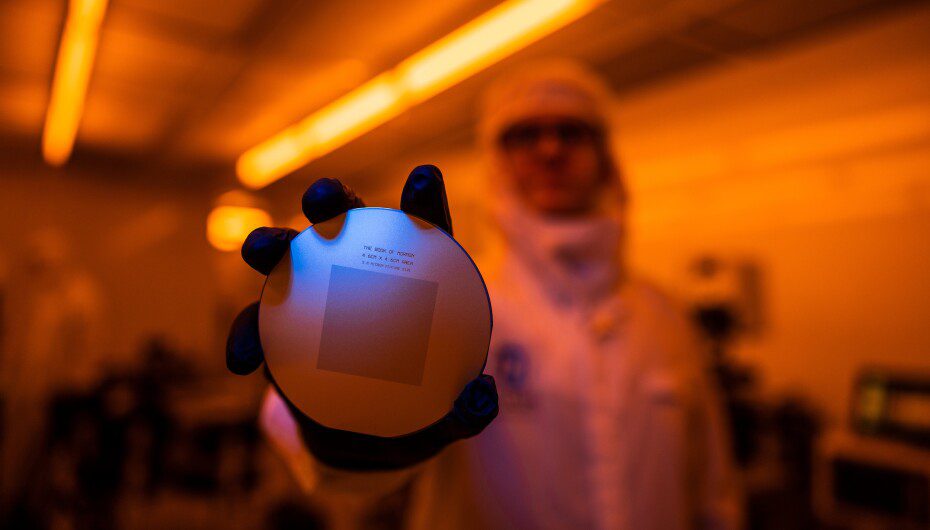 It could be the smallest physical copy of scriptures to ever exist. Call it The Book of Mormon on a chip. Or, perhaps, the microscriptures. Whatever you call it, it’s pretty amazing:

A group of innovative BYU students from the Electrical and Computer Engineering Department found a way to etch the entire text of The Book of Mormon onto a thin silicon disc (called a wafer in the electronics world) that can fit in the palm of your hand. For reference, it’s about the same size of a senine or a shum, the ancient coins from Nephite currency.

And to top it off, after engraving the 4-inch diameter wafer with all 291,652 words contained in the book, the students gave it a gold-plated coating. Because, of course.

A wafer is a thin slice of semiconductor, usually made out of silicon, that is used to create computer chips. In a normal fabrication process, hundreds of microchips would be created from a wafer. For this group of students, instead of microchips on the wafer’s surface, they etched hundreds of thousands of tiny blocks of scriptural text.

To get specific, they engraved those tiny chip-sized squares with 1,497,482 microscopic characters, starting with the “The Book of Mormon, An Account Written by The Hand Of Mormon” from the Introduction, and ending with the last line of the last verse from the 10th chapter of Moroni: “…the great Jehovah, the Eternal Judge of both quick and dead. Amen.”

According to the team, each letter is about 25 by 35 micrometers (a micrometer is one millionth of a meter), and the gold-plated letters will literally last millions of years.

“Like Moroni himself, we etched into this wafer so it is physically engraved,” said student Ethan Belliston. “Current electronic storage degrades over time, but this will last forever. It’s a great way to create a compact, permanent record readable with a simple microscope.”

For good measure, the group also created wafers loaded with the entire Old and New Testaments. The Old Testament wafer is 4,234,673 characters while the New Testament is 975,320 characters.

To create the tiny scripture discs, the students obtained the text files for each of the three books and fed them into a program usually used for designing microcircuits. A microprint master was then made and patterns transferred to the wafers using machines in the College of Engineering cleanroom. Those wafers are currently on display outside the cleanroom on the fourth floor of the Clyde Building.

Thirty five years age I got a bible (Old and New Testimony) on microfiche. It was 2"x2".