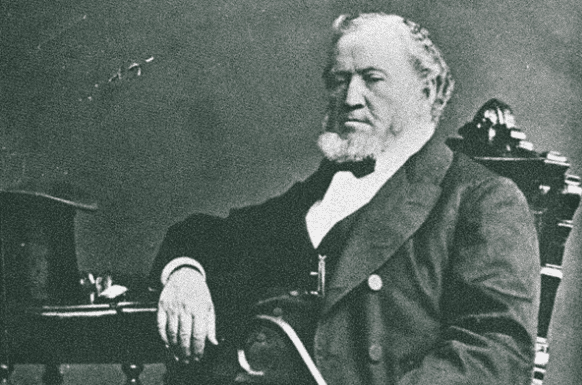 Note from the author: Today’s article is based on the book “Joseph Smith and Herbal Medicine” by John Heinerman. It is especially interesting in light of the herbal detox that has been so incredibly helpful for Meridian readers since 2008. CLICK HERE

Happy Pioneer Day! Whether you live in Salt Lake City or elsewhere, today we celebrate our marvelous Utah Pioneers, their works and their legacy. Wouldn’t it be incredible to bring back some original Pioneers to see Salt Lake City today? To hand them each a Smart phone and a tall, cold drink of water filled with ice?

Imagine their amazement as we explained how to text and take photos and videos. Or showed them how ice is made in an electric machine – even in the middle of the summer in blistering heat. What a difference texting instructions and warnings to each other along the trail would have been, along with ice for their comfort and health. How incredible it would be for us to have actual photos to document their trials and joys!

Right up there, probably more importantly, would have been the difference of modern day science and medicine. You can read the first article in this series, “Joseph Smith and Herbal Medicine in Nauvoo” at my website, CLICK HERE.

After the death of Joseph Smith in 1844, Brigham Young continued Joseph’s strong counsel to avoid medical doctors, even until shortly before his own death in 1877.

In 1846 he wrote to the Mormon Battalion, “If you are sick, live by faith and let surgeon’s medicine alone.  If you want to live, use only such herbs and mild food as are at your disposal.  If you give heed to this counsel, you will prosper; but if not, we cannot be responsible for the consequences.  A hint to the wise is sufficient.”  (Letter dated August 19, 1846 to captains, officers and soldiers of the Mormon Battalion.)

The U.S. government had assigned a Missouri doctor, a Dr. Sanderson who hated Mormons with a passion.  Dr. Sanderson threatened to cut the throat of any man who would administer any medicine without his orders.  His hatred toward Mormons was reciprocally matched by the hate of the Mormon soldiers towards him.   President Young made sure that a qualified Mormon botanical doctor, William L. McIntyre, accompanied the soldiers and was appointed with the title “Assistant Surgeon” who was loved and appreciated by the men.

As the Saints established themselves the Great Salt Lake Valley, the value of reliance upon faith and herbs for healing was repeated by President Young often, seeming to carry on the great belief Joseph had in botanical medicine.

In fact, a doctor from Illinois wrote to Brigham Young and asking to bring a large group of neighbors to Utah as converts.  Brigham told him that if he “wanted to earn his bread like an honorable man, he would be welcome, but that there was very little need for doctors in Utah.” (“Medicine and the Mormons”, article by Robert T. Divett in the Bulletin of the Medical Library Association, Vol. 31, No. 1, January 1936.)

During these years in Salt Lake City a “Council of Health” was established.  The Council was headed by Willard Richards, the head botanical physician in Nauvoo who knew and loved the Prophet Joseph, and served him along with his brother Levi.  One of the council’s first tasks was to visit the large island in the Great Salt Lake to secure for medical purposes, such saline plants and roots that were needed.  Beyond that, they were to seek and to find in the surrounding areas the additional medicinal plants for the cure of diseases incident to the climate.  The society was very active and open to men and women, where they would meet and discuss aches, pains and modes of care.  Botanical physicians practiced widely in the early Utah years and were most welcome at these meetings and given a seat of authority.

Into the late 1850’s, Brigham continued to state the importance of self-reliance, but began to acknowledge that other remedies should be considered:

“If we are sick and ask the Lord to heal us, and to do all for us that is necessary to be done, according to my understanding of the Gospel and salvation, I might as well ask the Lord to cause my wheat and corn to grow without my plowing the ground and casting in the seed. It appears consistent to me to apply every remedy that comes within the range of my knowledge, and to ask my Father in Heaven, in the name of Jesus Christ, to sanctify that application to the healing of my body … it is my duty to do, when I have it in my power.  Many people are unwilling to do one thing for themselves in the case of sickness, but ask God to do it all.”

The addition of “other remedies” is no doubt reflective of the great advances in medical science during the 1840s, (the last of Joseph’s life, the end of the Nauvoo years and the beginning of the trek west) and through the remainder of Brigham’s life.   Modern nursing through the influence of Florence Nightingale, Pasteur’s discoveries in the field of bacteria, and the discovery and use of ether as anesthesia are but a few of the now common medical practices and truths that were then considered astonishing.

In 1869, he said “Learn to take proper care of your children… if any of them are sick, the cry now is, instead of Go and fetch the Elders to lay hands upon my child,’ it is Run for a doctor.’  You should go to work and to study and see what you can do for the recovery of your children.  Treat the child with prudence and care, with faith and patience, and be careful in not overcharging it with medicine.  If you take too much medicine into the system, it is worse than too much food…”  Journal of Priddy Meeks, Utah Historical Quarterly, 10:199.

In 1872, five years before his death, he called his nephew, Seymour B. Young, to be a doctor and sent him off to New York City to study.  He also called other herbalists and druggists to become doctors. They, and even some women who were called, left Utah to become educated in the East, then returned to Utah to practice medicine.

At the same time, he was also calling others to carry on and become qualified practitioners in the field of botanical medicine, documenting his standing that faith, herbs and mild food were the primary sources of healing.  They, too, were sent back East to study (at the Thomsonian Schools of Botanic Science) then returned to Utah to practice.

Did Brother Brigham vacillate until the time of his death on the place of medicine for the Saints?

In 1871 (just a year before sending called individuals off to the East to medical school) he said:

In 1872 (the same year he sent his nephew off to medical school in New York City) he said:

“Would you want doctors?  Yes, to set bones.  We would want a good surgeon for that, or to cut off a limb.  Do you want doctors?  For not much of anything else, let me tell you, only the traditions of the people lead them to think so, and here is a GROWING EVIL IN OUR MIDST.  … Now the cry is “Send for a doctor.’  If you have a pain in the head, Send for a doctor, if you feel aches, “I want a doctor’ …”

“Instead of calling for a doctor, you should administer to them by the laying on of hands and anointing with oil, and give them mild food and herbs, and medicine you understand.”

Though his actions and statements seem to be in direct opposition,  herbalist John Heinerman observes:

“First of all, he believed in doctors, but only to the extent of fractures, sprains and such, with a surgeon necessary for amputation when they may occur … the real reason is because a good majority of the Mormon people wanted these services for themselves in the territory.

“And rather than suffer to see some corrupt Gentile practitioners come in and work their stuff upon the members of the Church, he felt that if they had to have doctors, they might as well have those of their own faith treat them.  The territory had already been ‘blessed’ with a few of those kind of the world, and he did not want any more if he could help it.  (Joseph Smith and Herbal Medicine, page 93)”

On exactly the same premise, he set up the ZCMI organization, so that the saints who were buying their goods from non-members, would now by shopping from Church members and stores of Church members, rather than gentiles, where at least the money would go toward the building up of the Kingdom of God.

In the fall of 1875, just two years before his death, he exhorted the Saints again to resort to “mild foods, herbs and medicine you understand.”  This seems to indicate that he had not changed his mind, nor ruled out herbal medicine.  However, at his own death on August 29, 1877 he was attended by three prominent medical doctors, his nephew Doctor Seymour B. Young and and Doctors Joseph and Denton Benedict.  They were able to administer morphine to ease his terrible pain from inflammation of the bowels and what is believed to be his cause of death, peritonitis from a ruptured appendix.

My personal testimony is that he was a Prophet indeed, knowing and preaching that our Father In Heaven has provided for man through 1) faith in the Lord Jesus Christ and the gift of healing, 2) nature with herbs and mild foods and 3)science through inspiring brilliant men and women whose life missions are to improve our individual lots.  I believe that it is up to each individual to prayerfully exercise faith, follow the Word of Wisdom to the best of one’s understanding, and to prayerfully seek for the best and most appropriate personal health practices and, as necessary, inspired doctors and practitioners.

Twenty five years after Brigham Young’s Death, the first hospital in Salt Lake City was dedicated.
In an editorial in the Deseret News dated Jan. 6, 1905 we read:

“Remedies are provided by the Great Physician or by Nature as some prefer to view them and we should not close our eyes to their virtues, nor ignore the skill and learning of the trained doctor.  It gives evidences that “Mormon” enterprise is abreast of the times and that L.D.S. are ready to avail themselves of scientific knowledge and progress, and are not slow to move with the movement of modern thought and learning.”  P. 111 Deseret News Jan. 6, 1905

NOTE FROM AUTHOR: Th articles may inspire you to learn more about the herbal detox health product that is currently being shared and has become exceptionally helpful for Meridian Readers.

Carolyn Allen is the Author of 60 Seconds to Weight Loss Success, One Minute Inspirations to Change Your Thinking, Your Weight and Your Life. She has been providing mental and spiritual approaches for weight loss success both online and in the Washington, DC community since 1999 presenting for Weight Watchers, First Class, Fairfax County Adult Education and other community groups. She and her husband, Bob, are the parents of five children and grandparents of eleven. They are now happy empty nesters in Jackson, Tennessee, close to Memphis, where they center their online business for an amazing herbal detox. CLICK HERE