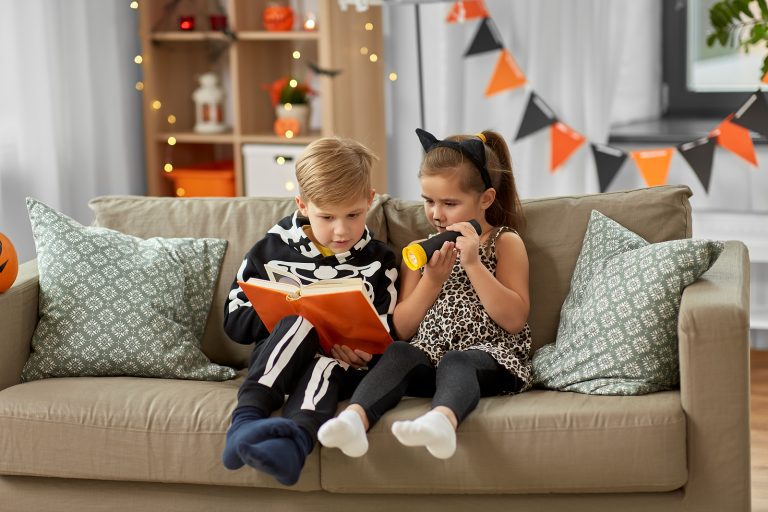 Books to Scare or Just Enjoy

Halloween is coming soon so why not curl up with a book that’s not too frightening. The first four books are picture books good for the whole family. The rest are for ages eight and beyond unless otherwise indicated.

If You Ever Meet a Skeleton, by Rebecca Evans and wonderfully illustrated using mixed media by Katrin Dreiling, is a delightful rhyming tale about what to expect when meeting this boney fellow. The story becomes quite funny as you learn all of the things skeletons can’t do. Skeletons have no brains-/it’s slowly turned to goo. They can’t play hide-and-seek, ‘cause they can’t count to two. The depictions of the skeletons set against a gray background are hilarious and bound to bring giggles throughout.

Countdown to Halloween!: With a Story a Day (Peanuts), by Charles M. Schulz and brightly illustrated by Robert Pope, is a collection of original stories that is intended to be read each day in October leading up to Halloween. The stories are short making for a quick read and perfect for bedtime.  Some of the stories include: The Perfect Halloween Treat, Choosing the Perfect Costume and A Costume for Woodstock.

Hardly Haunted, by Jessie Sima, is the perfect read-out-loud for youngsters who like not-too-scary stories. A house sits all alone on a hill, but it wants a family so it can become a home. However, this house realizes that it appears haunted from the way it looks and the sounds it emits. How it comes to have a special family to enjoy will delight all. The blues and purples throughout create a slightly haunting theme and the onomatopoeias lighten this simple storyline.

Twitch Witchy Itch, by Priscilla Tey, is rich with onomatopoeia wordplay as a nervous witch, Itch, prepares her house for company. But her nervous twitch of trying to get her house ready conjures a spell to complete the dusting and everything magically goes into the closet. When her house guests arrive, they become part of the spell and into the closet they go. Itch must make amends and decide if she wants a clean house or friends. The illustrations, made digitally and with gouache, are wonderfully filled with adorable little creatures including mice and a cute monkey.

The Cursed Carnival and Other Calamities, edited by Rick Riordan, is a collection of ten stories that feature unsuspecting heroesfrom some of the best authors of this genre. For example, some stories have a cave monster, a ghost who desires to erase history and a deserted demon. Some of the authors include Kwame Mbalia,  Carlos Hernandez and J. C. Cervantes. However, be warned you that once you read one story, you’ll end up reading all!

The Memory Thief Book 1 (Thirteen Witches), by Jodi Lynn Anderson, is an exciting fantasy told through twelve-year-old Rosie’s eyes. Rosie discovers that her mother was a witch hunter and that a witch called “The Memory Thief” has stolen all of her mom’s memories. So Rosie heroically sets out to defeat this witch and save her mother’s memories. The cast of extraordinary characters help to move the story along including a helpful ghost named Ebb. This is the beginning of a very promising series!

The Ghoul Next Door, by Cullin Bunn and brilliantly illustrated using Clip Studio Paint, ink, watercolor and mixed media by Cat Farris, is a graphic book rich in excitement and  drenched with spooky adventure. The ghoul is a ghost who desires to be friends with Grey who cuts through a graveyard to get to school. Grey discovers that there is more than the ghoul to have to deal with.

Weird Kid, by Greg Van Eekhout, is a very fun and funny science fiction story about an alien who can change his shape. He is now in middle school and his human body is becoming uncontrollable and somehow he has lost his ability to change. This story is so intriguing and rich in adventure that it will surely entice even the most reluctant reader!

The Great Ghost Hoax, by Emily Ecton and sprinkled with delightful illustrations throughout by David Mottram, is a fun family read-aloud book. Butterbean is an adorable dog who is always looking for adventure. She and the other pets live in an apartment building. When there is suspicion of a ghost in the building, the pets set out to investigate. But soon they discover much more than just a ghost. This is a sequel to The Great Pet Heist but there is no need to read the first book to enjoy this story. Chances are you will desire to read Ms. Ecton’s first book as well.

Spooky Sleuth & Solve, wonderfully illustrated by Victor Escandell and an adaptation of mysteries by Ana Gallo, has nine supernatural and mysterious stories that invite the reader to solve the riddles presented in each story. At the beginning of the book is a cryptograph to help you decode each puzzling story. The stories are ranked in difficulty by skulls from one to five. The fewer the skulls the easier the story is to solve. This book makes you think and is great fun!