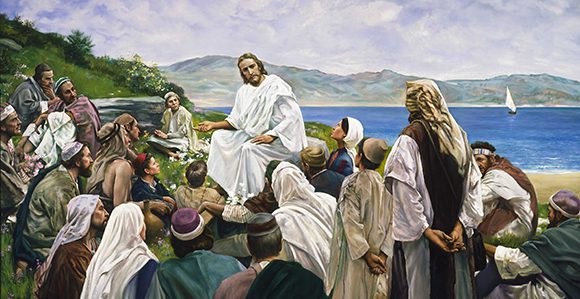 Blessed Are the Merciful

Cover image: Reproduction by Grant Romney Clawson of the original “Sermon on the Mount” by Harry Anderson.

During the Revolutionary War in September 1777, an army of 12,500 British troops and a detachment of British marksmen made their way to the rebel capital in Philadelphia. In the woods along Brandywine Creek, British Captain Patrick Ferguson, an incredible marksman, had the opportunity to take advantage of the enemy in a big way.

Ferguson saw two patriot officers ride up the path on horses. He ordered his men to sneak up for an ambush. But Ferguson decided to show mercy by calling out his position, which caused the two horsemen to scatter.

During the same battle, Ferguson ended up in a field hospital where he found out one of the horsemen he had in his sights was none other than General George Washington. Had he not shown mercy, the Revolutionary War and history of the United States may have been a lot different (see Ernest Furgurson, “The Marksman Who Refused to Shoot George Washington,” historynet.com).

We all need mercy

According to the Gospel Topics section found on LDS.org, the term “mercy” means “the compassionate treatment of a person greater than what is deserved, and it is made possible through the Atonement of Jesus Christ.”

The Savior told His disciples, “Be ye … merciful, as your Father also is merciful” (Luke 6:36). Whenever a person receives divine forgiveness for sin, the answer to prayer, a priesthood blessing of healing, or a blessing of any kind, he or she is the recipient of treatment “greater than what is deserved.”

It’s ironic that although every person on this earth needs a generous dose of mercy, there are many who stand ready to pounce on anyone who shows weakness, error, poor decision-making, or simply makes an innocent mistake.