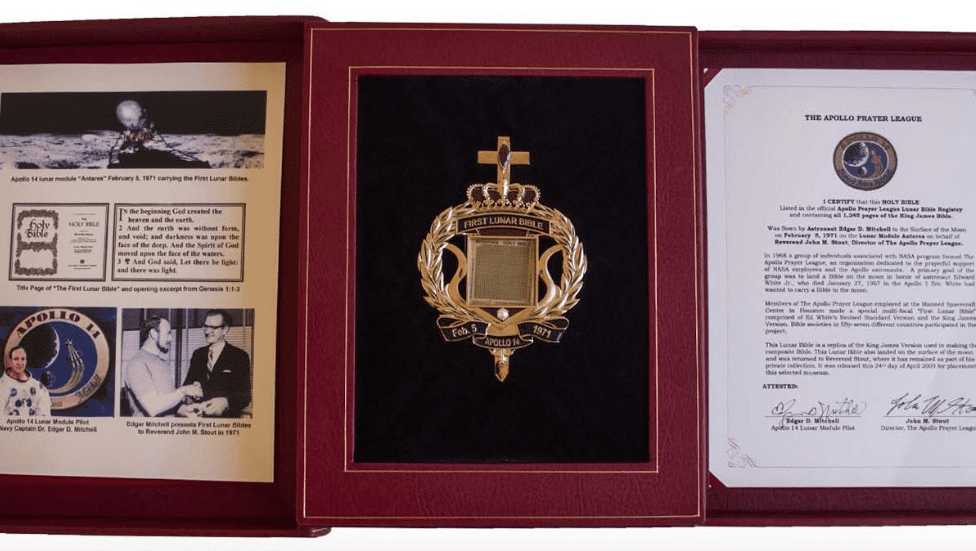 Bidding starts at $50K for Bible that went to moon

The following is excerpted from Mark A. Kellner of the Religion New Service. To read the full article, click here.

For the collector who has almost everything, there’s a chance this week to claim ownership of a Bible that literally was out of this world.

A Los Angeles auction firm is taking bids on a microform, or photographically reduced, King James Bible that went to the moon on the 1971 Apollo 14 space flight. Similar in appearance to a piece of microfilm, the microform is certified as containing the entire biblical text. Its print is so small that one needs a microscope to read it.

The tiny, space-traveling Bible was one of 11 that left Earth’s atmosphere in the care of landing module commander Edgar Mitchell, who died in 2016 on the eve of the 45th anniversary of that lunar landing. He carried them in a container for personal items. A print Bible would have been too heavy for a space mission, but the lightweight versions posed no obstacle.

Minimum bid for the rarity is $50,000, according to the Nate D. Sanders auction firm, which will close bidding at 5 p.m. Pacific time on Thursday (July 26).

According to auction house spokesman Sam Heller, a similar lunar Bible flew along for the famously aborted Apollo 13 mission of 1970, in which mechanical malfunctions forced astronauts back to Earth under hardship conditions. That Bible sold for $62,500 last year despite never having reached the moon. Heller said the firm wouldn’t guess at a final bid for this latest item, which is being offered on consignment by an unnamed collector.