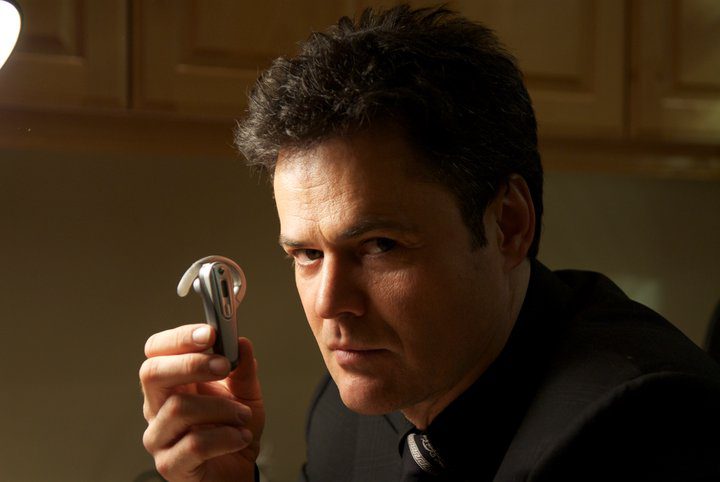 Beloved LDS Entertainer as a Terrorist?

Most directors don’t land an international superstar to appear in their first movie. Then again, most films don’t trigger an accidental “calling-all-units” manhunt by local police or require potentially fatal stunts of the lead actors. But CTU: Provo was hardly an average film shoot, and that’s just scratching the surface.

BYU alum Alan Seawright directed and starred in the feature-length comedy, a loving parody of TV’s 24, back in 2007. The story follows a pair of Jack Bauer fanboys assisting Utah counter-terrorist agents when Provo comes under attack. Donny Osmond gamely agreed to appear as the main villain as a favor to the cast. The film has been selected for a 10th anniversary screening at this year’s LDS Film Festival in Orem. The screening will be followed by a Q&A panel with Seawright and co-star Jonathan Decker.

The latter, then a performer with the popular humor troupe BYU’s Divine Comedy, risked his life hanging from the door of a speeding van. The former allowed his body to be repeatedly hit by a car in order to get a shot. These stories, along with those detailing working with Osmond and the cast’s near-arrest by what Decker says “seemed to be all of Provo PD” will be shared from the stage of the SCERA Theater on March 2.

CTU: Provo was well-received on the film festival circuit and at Salt Lake Comic Con. Seawright sent a copy of his “epic fan-film” to 24 producer-director John Cassar, who personally responded praising its direction and “well-executed” action. Preeminent fansite 24fans.com called it “highly entertaining” and described it as having “very impressive production qualities…an excellent cast, a solid script, and direction which at times is more inventive than that on the show itself.”

Co-starring Rick Macy (Ephraim’s Rescue), Will Rubio (BYU-TV’s Random Acts), Jimmy Chunga (The Singles Ward), Paul Hunt (The Cokeville Miracle), Charan Prabhakar (HBO’s Silicon Valley), and about a dozen alumni of BYU’s Divine Comedy, CTU: Provo will play at 9:30 p.m. on Thursday, March 2 at the SCERA Theater in Orem. Tickets are available 801-225-ARTS, online at www.scera.org, or at the door.