Beauty and the Beast: Comparisons and Controversy | Meridian Magazine 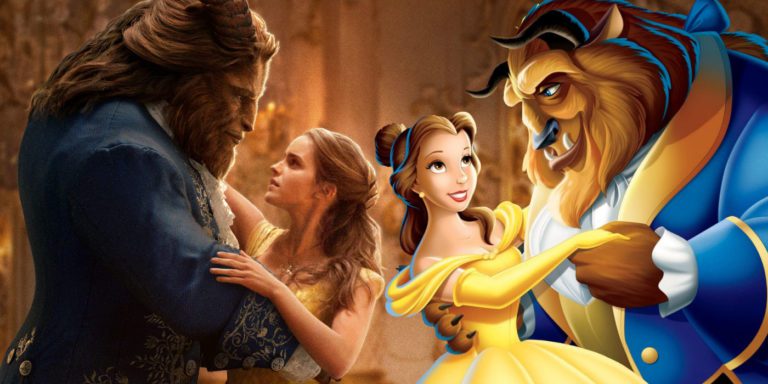 Beauty and the Beast: Comparisons and Controversy

Since its announcement the new Beauty and the Beast has courted comparison and controversy. How does it stack up? Is it okay for your kids? What discussion points are there for families? Check out my review below and, if you like, pre-order the new movie here.

WHAT’S BEAUTY AND THE BEAST ABOUT?

Disney updates their 1991 animated classic about a bookish beauty who falls for a monstrous beast.

It won’t be nominated for Best Picture like the original, but what this new Beauty and the Beast does right makes up for its flaws. Let’s get the negative out of the way. Emma Watson struggles a bit out of the gate; she seems to have a decent voice, but director Bill Condon (Dreamgirls) is unwilling for us to hear any flaws and she’s noticeably auto-tuned. Watson shines in subtler, more intimate moments of kindness and affection, so she’s great whenever she’s interacting with her father, falling for Beast, or bonding with the castle furniture/servants. She’s no Julie Andrews, however, and her solo musical monologing leaves something to be desired.

The film also sticks a little too closely to the 1991 film, fearful to establish itself as something unique as did 2015’s fantastic Cinderella. Swaths of dialogue and musical cues are lifted wholesale and this version can only suffer in comparison to a bona fide classic.

What works? Almost everything else. Like I said, Watson does fine work in many parts of the film. Even though this movie copies the original in many respects, it usually does a decent job of it. I found myself most enchanted, however whenever it went “off book” and did something new, such as integrating less-familiar songs from the stage musical, offering some gorgeous brand-new tracks, patching up plot holes, and providing well-conceptualized backstories to both Belle and Beast that effectively deepen their bond and develop them as characters.

The cast is excellent. Dan Steven’s Beast is magnetic; while the motion-capture animation is occasionally less-than convincing, the performance is nearly flawless and rich with emotion. Kevin Kline’s Maurice is less of a crackpot and more of a steady, loving father here; his relationship with Belle is very moving. Luke Evans proves an inspired choice for Gaston; not burly and moronic like his animated counterpart, here he’s more of an intelligent narcissist trying to keep his darker nature in check, making his ultimate failure all the more chilling.

Josh Gad’s LaFou is much more sympathetic here than he was in the 1991 film, loyal to Gaston but nagged by an ever-growing conscience. The castle servants were a highlight for me; when you have actors like Emma Thompson, Ian McKellin, Ewan McGregor, Audra McDonald, and Stanley Tucci you really can’t go wrong.

Visually the film is a wonder. The music is generally fantastic. This new film is sure to delight fans of the story and win over a new generation. I’d not be surprised if repeat viewings cause me to warm to it even more. It only suffers in direct comparison to the original, but as a standalone it satisfies.

Beauty and the Beast is rated PG. There are some intense and frightening moments in which wolves menace various people and attack Beast. Speaking of the titular love monster, he is frightening and intimidating in several scenes. A man punches another man unconscious and leaves him for dead. A character is shown to be dying of disease. Beast is shot by Gaston several times and hit in the head with a stone fixture. Characters drink alcohol in a tavern. Before being turned into Beast, the prince is shown leering over several maidens at a dance. As for the so-called “gay controversy,” it’s much ado about nothing. LaFou is portrayed as effeminate. The opera singer chest of drawers attacks three men, dressing them in women’s clothing; two are mortified, one comically enjoys it. Later, while rotating dancing partners LaFou bumps into that man (who’s no longer dressed as a woman) and they smile at each other. That’s it.

Only through accountability, humility, and contrition can we change our natures (see Ezekiel 33:15-16, Doctrine and Covenants 58:43). Do not judge based on outward appearance; rather, consider a person’s character (see 1 Samuel 16:7). It’s never too late to do the right thing (see Mosiah 26:30).

For more of my family movie reviews, along with marriage/family tips and online relationship courses, visit yourfamilyexpert.com.

The LaFou thing aside, I haven't seen the movie, so don't have an opinion, but wouldn't doubt for a minute the truth to that rumor. What is a serious issue for me is supporting Emma Watson in any movie. She is openly supportive of Planned Parenthood's and women's choice to kill pre-born babies. I would never give her $25 for anything, let alone 90 minutes of questionable entertainment.

I'll tell you why some make that choice - because pop culture since the 90s have increasingly made it cool to "come out", and praised these people for how brave they are, and how special and different. It's a lot of attention given to anyone who seeks it. It's a way to feel counterculture and accepted at the same time. And now the attempts to normalize it have apparently succeeded.