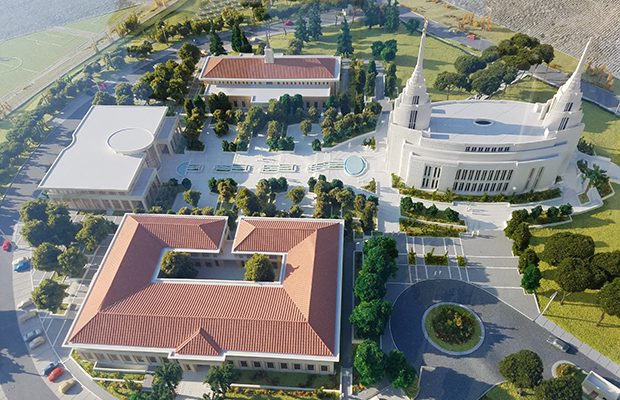 The temple and its adjacent buildings—all sitting on a 15-acre elevated site about 10 kilometers (6 miles) northeast from the Roma Termini central station—are a result of the prayers, faith, efforts, and service of tens of thousands of Latter-day Saints and missionaries throughout Italy over the years.

It is, as President Pickerd says [president of the Italy Rome mission], another progressive step of Zion being established in Italy, providing in-country temple worship and ordinances to Church members of the peninsula nation jutting into the Mediterranean Sea.

But with the construction and dedication of a temple, he adds, comes the realization there is much more to do.

“This is a great achievement, but it’s not the end,” President Pickerd said. “We want to fill the Rome Italy Temple with sons and daughters of God from Italy and do the work for their Italian ancestors. The vision we’re striving to create is filling the Rome Italy Temple—to meet that, we’ve got a long way to go.”

In other words, member and missionary work has helped to bring a temple to Italy, and that temple in turn will bless the lives of members and help foster additional opportunities for missionaries.

“The temple is a beacon, a great missionary tool for us as we point people toward it,” said Elder Bryce Dickey, a missionary from Happy Valley, Oregon, serving in Rome. “It helps them see that this Church isn’t just something small and isn’t just an American church. Instead, it’s a global Church that is fulfilling prophecy. It’s going to fill the whole earth.”

Elder Dickey points to the temple and the visitors’ center tying a latter-day church to the biblical lands traveled by ancient Apostles of the New Testament as “a great indicator that the Lord’s work is rolling forth.”

The Church in Italy

Modern-day missionary work in Italy began in 1850, when Elder Lorenzo Snow of the Quorum of the Twelve Apostles arrived in Genova with companions Thomas B. H. Stenhouse and Joseph Toronto. They headed to northern Italy’s Piedmont Valley and worked primarily with the Waldenses, a protestant religious group of French origin.

Over the next four years, the Book of Mormon was translated into Italian and some 220 converts were baptized. However, the immigration of most members to join the Saints in and around Salt Lake City, coupled with local opposition to the Church, resulted in active proselytizing ending in the 1860s.