Treasure in Heaven: A Poignant and Stirring Must-See | Meridian Magazine

Treasure in Heaven: A Poignant and Stirring Must-See 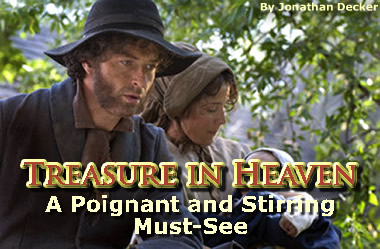 If you’ve ever seen an LDS film that brought your soul to a higher plane, odds are T.C. Christensen had a hand in it. As a writer, director, producer, and cinematographer, he has helped add professional gloss, creative warmth, and spiritual sincerity to projects such as The Testaments of One Fold and One Shepherd, The Work and the Glory, Joseph Smith: The Prophet of the Restoration, The Touch of the Master’s Hand, Gordon B. Hinckley: A Giant Among Men, The Mouth of Babes, Forever Strong, Emma Smith: My Story, Only a Stonecutter, and many more. After enjoying the spirit and truth of many “Mormon Movies,” but not necessarily the quality of the filmmaking, I have come to expect that when Christensen’s name is in the credits, I’m in for an artistic treat as well as a spiritual banquet. 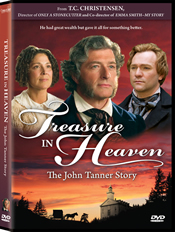 This is certainly the case with his latest effort: Treasure in Heaven: The John Tanner Story. As he did with Only a Stonecutter, Christensen, as well as his talented cast and crew, has captured with wonderful detail the story of one of Church History’s unsung heroes. As was also the case with Stonecutter, he does so in about twenty minutes: perfect for family home evenings with youth who have short attention spans.

John Tanner was a well-to-do New Yorker in the 1830’s when a crippling illness, as well as a meeting with missionaries, affected his life and the Church forever. To divulge any detail would be to rob the viewer of enjoying the story as it unfolds, so suffice to say that the tale is one of consecration and wholehearted dedication to the Lord as Tanner exercises faith in God’s promises. Becoming a major hero for the Church, and much beloved by the Prophet Joseph, his tale carries a rich power in and of itself, a power fully realized in this screen adaptation.

The acting is very good. Nathan Mitchell, who has portrayed Joseph Smith for the better part of a decade, continues to impress as the prophet of the Restoration. Matthow Maddox and Shauna Thompson, respectively, portray John Tanner and his wife Elizabeth, and both do inspiring, realistic work. From the acting to the music, the cinematography, the creativity of the editing, and the screenplay, all are top-notch and effective. 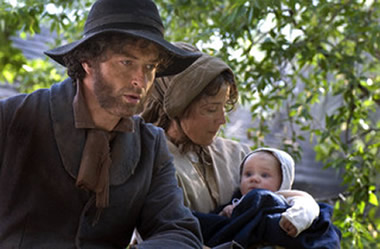 All that said, this is not to say this is an epic masterpiece, and nor was it meant to be. It’s a simple, faith-affirming tale, well-told. One might ask if a twenty-minute film is worth the roughly fifteen dollar asking price at Deseret Book or Wal-Mart. That’s up to you, but I believe the answer is yes, both for the quality of the product and for the probability that more films like this will be made if we support them. I watched the film once on my own for this review, and the next day shared it with my wife’s family, who asked after viewing it: “Where do you find these little gems?” With the values of the world shifting slowly away from belief and righteousness, and with more and more emphasis placed on the media, I think it’s important to use film, television, and music for godly ends, and to support those who magnify their creative talents to inspire testimony and faith.

But that’s just me. You can always spend your dollar on empty bombastic drivel like Transformers 2. Ugh.

Editor’s Note from Maurine Proctor:  I have to add my words of praise for Treasure in Heaven. We not only saw it once for Family Home Evening, we saw it twice.  That is not because we were out of ideas for Family Home Evening, but because this is such a genuinely moving story and beautifully done.  Hurrah for the artistry that went into this film and cheer again for the life of John Tanner whose example rings through the ages and whose posterity has played significant leadership roles in the Church. After we saw this movie as a family, we were inspired to have a family council about what we could do to help someone in need, having this discussion with our souls fully moved and expanded for the viewing. Truly don’t miss this show.