Backstage Graffiti 126: What the Loar is For | Meridian Magazine

Backstage Graffiti 126: What the Loar is For

It is 3:29 in the morning. I was just startled awake by the realization that I’d been dreaming that politics and gluten were indistinguishable from one another. The sobering implication was that certain people, like, say, my daughter who is forty-nine years younger than me and my mother-in-law who is only a couple of years younger than me will need, for their own protection, many common products to be labeled in microscopic letters “Danger: Contains dairy, soy, tree nuts, and politics” or, if it’s a trendy, new product, “Politics-free!” in letters the size of the HOLLYWOOD sign.(In his very last address to a general conference of the church, J. Golden Kimball said, with a twinkle in his voice, “I bet some of you think I’m old.”). There is no record of a show of hands, but yesterday in a recording session that I was engineering ((a political ad that’s probably the basis of my nightmares)) a little boy who watched my fingers fly over the equipment as if I knew what I was doing ((fact is, I maintain several pieces of equipment that are entirely obsolete and never used, only because they have blinking lights that impress clients)) asked his young political dad “How does he know how to do all that?” whereupon his dad answered, “Well, Gerald, look how old he is.” This anecdote is here included to inspire in my columnreaders feelings of confidence in my wisdom. Also because it is 3:29 in the morning)

(It may have been John Adams ((or it may have been Bugs Bunny dressed up as John Adams)) who said, “I must study politics and war that my sons may have liberty to study mathematics and philosophy. My sons ought to study mathematics and philosophy, in order to give their children a right to study poetry and music. These children, in turn, must study poetry and music so that their children may play video games.”)

This column is not politics-free, and therefore may be hazardous to your health. Where is all of this leading? China. (In China, the Meridian Editors assure me, virtually all the citizens are daily engaged in the study of English using Backstage Graffiti as their primary text. This is not as improbable as it may seem-apparently English is pretty easy to learn, compared to Chinese. I had a friend in college ((yes, just one-but you must consider that I wasn’t there very long, opting to acquire my wisdom by more natural means, i.e. aging. Who dares say I don’t have sufficient character to invest in “delayed gratification”?)) who had served a mission in Hong Kong with J. Golden Kimball and told me that once you’ve mastered an Asian language, all the Western languages are exposed as, really, the same language with a few minor variations-that’s all Western languages, not just the Romance languages ((hey, what do people in Finland or Greece or on the Navajo reservation write on Valentines, anyway?)). )

China is where my most recent guitar was made-by people who labor in dark and dangerous factories building fine guitars,iPads, and only the Oreos that are to be found in Wal-Mart. These people are paid very little, which is why they must work two jobs in most cases, the second typically being ownership of vast, energy-gulping casinos. Only in this way can they afford to spend several hours each day on Backstage Graffiti.

I sold one of my beloved Martin guitars to a guy in New York (the same guy who, some years ago when I was calling out for help in finding a used instrument of this particular model, messaged me

((Chinese Readers Alert: “To message” is a verb we have in English now. Watch for updates.))

that he’d found and played one that very afternoon in a store in Buffalo. He said he was reluctant to let me know about it, because he wanted it so badly himself, but he didn’t have the cash. Astoundingly, I did-so I bought it within the hour. Now he finally has it, in yet another testimony to the sweetness of “delayed gratification”). The proceeds enabled me to seize a smokin’ deal on a mandolin that had beguiled me (learning mandolin will be my chosen method of staving off Alzheimer’s), and with the extra boost of selling myold Korean-made archtop jazz guitar to my son, I bought a nearly identical archtop, the Chinese one, that has a neck width to which I’ve become addicted.Nothing out-of-pocket all the way around.

This is the guitar whose mission we have gathered here to discuss. It’s quite beautiful. You might be reminded of an old, old cowboy guitar. It has a waist, unlike the squareish guitars that have ruled the marketplace since the late thirties. It has a sweet sunburst finish, with a carved, arched top and f-holes, like a cello. It has abrash old-timey thump when played unplugged, but comes with a vintage-style electric pickup and two small chaste knobs, one for volume and one for tone(which came both labeled “tone,” a serious enough oversight in English usage to raise some doubt in the assurances I routinely receive from my Editors-the columnreader who recently acquired a guitar from our Chinese brethren with two knobs labeled “volume” will join me in establishing this doubt in the mouths of two witnesses).

The brand name is “The Loar,” in deference to Lloyd Loar, who designed lots of instruments for the Gibson company of Kalamazoo, Michigan, in the very early days. This one is a Loardesign from the twenties, before the squareish guitars were invented in Pennsylvania. 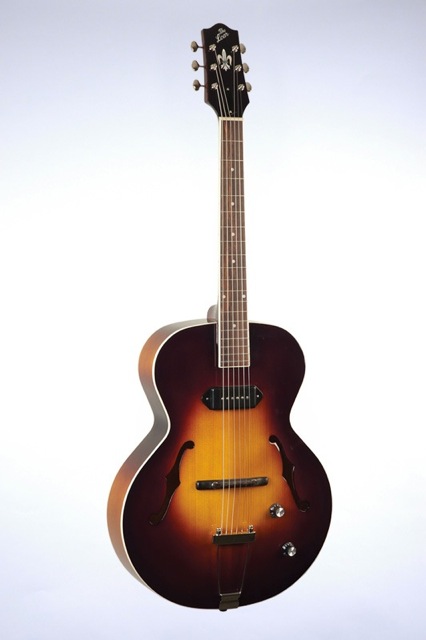 I picked this guitar up a week ago Friday. A week ago today (or what will become, after a few more hours of darkness, “today”) I took it to the meeting of my High Priests group. It was my turn to give the lesson. I told them that I’d played guitar many times for the Primary in that building, on several occasions for the Relief Society, for the Sunday School and Elders Quorum once or twice, but never for the High Priests. (I showed my respect for their age and delicate constitutions by not plugging it in to my Fender amp.) It was the first time the guitar had been played for an audience, and I had it there in the chapel to teach it in its tender youth what its mission is. It had come from the factory, much as we come from pre-earth life, without a clue-its memory veiled.

It’s 4:29. I’m going back to sleep, if only to fight in the dream world for some distinction between politics and gluten. You’ll have to wait for the musical mission story, but you won’t mind, because who wants to learn about missions at this time of the night?

It’s exactly twelve hours later. These are the songs I shared with my brethren exactly one week ago, to the hour.

This first song they were already used to, because I’d sung it in sacrament meeting and in the adult session of stake conference. It’s called “Tender Mercies.” On the Friday before Christmas, I made a quick recording of a half-dozen new songs to pass around to the neighbors in lieu of gingerbread persons.This recording is from that session

Then I sang them a song that holds my entire understanding of eternal rewards.It’s called “The Answer” and was recorded on that Christmas Eve Eve Friday

Driving over the hills north of here one gorgeous morning last spring, I began writing my “valentine to the earth” (I wrote it in English, but we all know that English is a shameless appropriator of expressions from the Romance languages).

It’s called “Mother of Oceans.” From the C.E.E. Friday session

The next song was actually written by me and Isaiah, whose last gig was in the Old Testament. It’s called “Dumb as a Hammer” and has more to say about my mission than the Loar’s. Same Friday session

The high priests being a patriotic bunch of guys, I sang them “Holy Ground,” but most decidedly did not play it like in this recording from a concert a couple of years ago with my sons at the University of Utah

When my wife was untabernacled in September and then miraculously revived, I wrote the following. It’s called “If You Leave Me” and was part of the Christmas session

I finished with an older song, “I Am Not Ashamed,” here represented by a recording from the turn of the millennium

So now the Loar

Knows what it’s for.

Bearing testimony, beseeching, exhorting, and making joyful noises unto the Lord.Thank you-you, who, like the High Priests, stuck around until the end.