The Unspoken Problem of Laman and Lemuel | Meridian Magazine

The Unspoken Problem of Laman and Lemuel

Each Tuesday Scot or Maurine Proctor will publish an article about the Book of Mormon to accompany your studies this year. 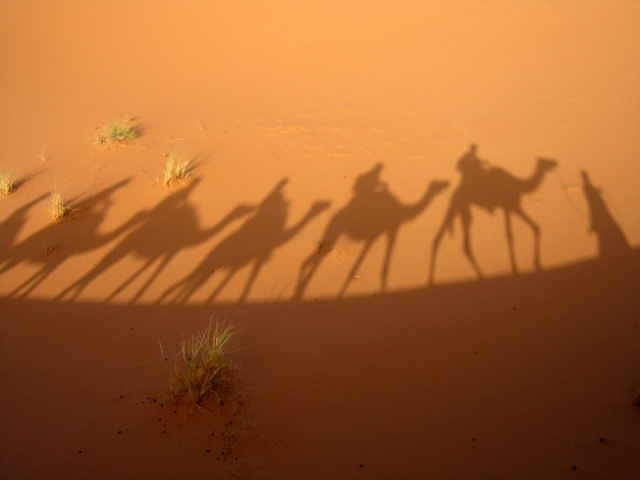 That Laman and Lemuel had the worst attitudes of anyone who ever rode a camel into the desert is a given.  They whined.  Their anger was explosive and threatening.  They hated every minute of their wilderness journey.  We have viewed them, all these centuries later, as cranks whose posterity stirred up all the trouble in the Book of Mormon.  They are archetypal troublemakers.

I once asked my institute class where that bad attitude came from, and nobody could really point to the source—but it’s in there.  We learn plainly in 1 Nephi 2:12 what their problem is—and it is this:  “they knew not the dealings of that God who had created them.”  Their blindness and howling stemmed from that single source.

Yes, these men had been taught by their parents.  They could undoubtedly recite prayers, attend rituals, go through the motions.  Growing up, they were probably what we would call today “active” in the Church—but still they didn’t know God.  When things got rough, that ignorance cost them dearly—and instead of refining them and bringing them closer to God as a wilderness journey is designed to do, their souls were only corroded like iron left to exposure in the desert air.

It is clear that someone can go through all the motions of discipleship and still not know “the dealings of that God who had created them.” Motions are never enough.  Lip service falls cold.  The heart has to long for God, our souls seeking Him with all energy—or we can be stuck forever in the shallows.

Catherine M. Thomas noted why we must exercise ourselves to come to know God and explore the spiritual life:

We have to keep exploring because in our church experience the rich concepts and principles can pale as we necessarily reduce the infinite concepts to our finite language and then take the finite form for the whole. As a result, what was once compelling becomes more familiar, commonplace, even cliché ridden… We can know that the words of scripture do not define, but only point to the tips of truths that beckon us into the treasure house.”

We learn the gospel and speak of it to each other in finite words which are mere symbols of the Infinite Unseen World, and sometimes those words flatten for us.  With oft-repetition, they may become thin.  It is never that the Divine World is limited, but that we are.  Heaven knows how to put a price upon its goods.  For us to cross the threshold into expanded knowledge and being takes a discipleship that yearns for Him, that works and struggles for that precious relationship.

Hugh Nibley said, “Have faith that there is more than you know; repent of all your present shallowness and silliness; wash off everything of this world.”

The problem is, of course, that we, like Laman and Lemuel, are often distracted by boredom or busyness, stuck with our finite eyes and understanding.  We are more shallow and silly than we care to admit, and the cares of the particular wilderness journey, which we find ourselves on, press down upon us relentlessly. The pounding of life and our mortal tendency to reduce words and the glorious reality behind them to their most finite and flat state may gradually reduce our awareness of what lies beyond our senses.  We may think that we “get” spiritual teachings, that we’ve heard it all before, when, in fact, we haven’t begun to make the journey to the holy mountain.

Could we ever, like Laman and Lemuel, be accused of “knowing not the dealings of that God” who created us?  Or if we knew once, or know sometimes, can we still say that we are singing the song of redeeming love?

Laman and Lemuel give us the perfect demonstration of how life feels to those who are lazy in their pursuit of spiritual awareness.   If the meaning of experience is reduced to our material comfort or our current context, we can be miserable indeed.

As Nephi sums up their experience in the wilderness he rejoices, which is no small feat when he has struggled for years in a trackless desolation, eating raw meat sometimes, thirsty often, blasted with heat and sand daily.

Yet he says, “And so great were the blessings of the Lord upon us, that while we did live upon raw meat in the wilderness, our women did give plenty of suck for their children, and were strong, yea, even like unto the men;  and they began to bear their journeyings without murmurings.  And thus we see that the commandments of God must be fulfilled.  And if it so be that the children of men keep the commandments of God he doth nourish them, and strengthen them, and provide means whereby they can accomplish the things which he has commanded them” (1 Nephi 17: 2,3).

He has come to know what it is to be nourished by God. How could he know the Divine in the same way if he has never felt a need, looked squarely at difficulty?  He recognizes that he has strengths he hadn’t had before.  Since it is our weaknesses which cause us so much sorrow, becoming stronger, wiser and more acquainted with God is worth the journey.  He has found in the wilderness what he could have never found at home.  Need sent him to climb the mountain and find the face of God.

Laman and Lemuel, conversely, have their own summation of the experience. Full of blame, soggy with self-pity, they lament, “Behold these many years we have suffered in the wilderness, which time we might have enjoyed our possessions and the land of our inheritance;  yea, and we might have been happy” (1 Nephi 17:22)

These contrasting opinions are in the same chapter. This is like a scientific experiment—with a control and experimental group.  Nephi and his whining brothers have had the same circumstances, the same wind that sand-papered their faces.  They have known the same hunger, the same thirst.  The difference between them is Laman and Lemuel “knew not the dealings of that God who had created them” and Nephi came to know God better and better each day.  We see the difference exhibited.

With God, Nephi is supported in his journey and the very experience is transformed.   It is a school, a favor, a privilege.  Hardship is less hard as there stands in him a sense of peace and light, steady and growing brighter each day.  He is not alone with an unspeakable burden.

All poor Laman  and Lemuel can do is yearn to be in Jerusalem and assert that the people there—whom God was about to let be carried off to Babylon for their wickedness—were righteous.  Not knowing God and his spirit, they were without a gauge of what righteousness was.  How could they be so wrong-headed and mistaken?

For them, the present circumstance was the only measure of what was good—and the misery and discomfort of the trek was the only voice they heard.  Each experience rendered them more miserable until they became angry and blaming.  They had no foundation, no context with which to see their experience except “Did it feel good right now?”  It wasn’t sandstorms that blinded them, but ignorance of God’s divine workings in their lives.

I have seen similar situations during this period of economic struggle when many people I know have lost jobs that were critical to their family’s well-being.  Many couples in this situation have turned to fighting and despair.  Blaming comes leaping to their lips.  But I know one woman whose husband had been without a job for a year who told me it had been a significant blessing to see how their prayers had been answered—not with the immediate job for which they longed, but with small miracles along the way. “We have not been hungry.  We have small, unexpected checks arrive when we needed them most.  Most of all, we have been struck by the kindness of people who have sacrificed to help us.  We are bonded together with a seal that will never come undone because they blessed us in our time of great need.”

Those who know the dealings of God understand that he will allow them to be thrust into a fire and that they will emerge transformed.  Others just bellow in the fire because they cannot see that the greatest rescue is the rescue from our “silliness and shallowness,” the weaknesses that eat at us like moths.

Not understanding God’s dealings meant that Laman and Lemuel did not turn to Him for answers.  They remained bewildered in the wilderness instead of guided by Jehovah whose hand is over all things.  When Lehi has his tremendous vision of the Tree of Life, Nephi wants to see it too, that he might know.

Nephi had a conviction which he pens for the reader, “He that diligently seeketh shall find; and the mysteries of God shall be unfolded unto them” (1 Nephi 10:19).  That’s an assertion worth living by—and it leads Nephi to pray and to be “caught away in the Spirit of the Lord yea, into an exceedingly high mountain, which I never had before seen, and upon which I never had before set my foot” (1 Nephi 11:1).

What followed was a glorious, panoramic view of history and a vision of the Lord himself in his personal ministry.  Meanwhile, what had Laman and Lemuel been about, those who were so sure that the Lord would make nothing known to them?  Also interested in the meaning of their father’s dream, they didn’t take it to the Lord.  Instead, they had been fighting in the tent about what it meant, disputing hotly with one another. Fisticuffs?  Harsh words?  We don’t know how far their division traveled, but it was more heat than light and they came away empty handed.

Nephi understates it, “Therefore they did not look unto the Lord as they ought” (1 Nephi 14:3).

Drawing near to the Lord, not just with our mouths, but with our whole soul and intent, will change this journey for us—for we are all on a wilderness journey just as surely as they were.  Exploring the spiritual realities and seeking to have light energize and expand our minds will utterly change the nature of our trek.  This isn’t a bleak life where energy and beauty fades, where hard things happen that define and hurt us.  This is a glorious journey to the promised land and every event, experienced with God at our side, is part of that story that ends in heaven at his throne.