The Power of One Convert 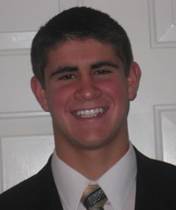 As I was reflecting back on my mission and the miracles that have and are coming forth, I can’t help but notice the Lord’s hand in this wonderful work. Who would have thought that by just opening my mouth to one man, so many people would enter the waters of baptism?

It was early January 2009, when my companion Elder Mechling and I were heading to an appointment in an apartment building.  There was a man outside doing some sort of strange exercise routine, so I asked him what he was doing. He told me that he had experienced a stroke a year ago and that he was trying to recover.

I asked if he lived in the building and he said that he did, so I asked him if we could stop by in an hour after our current appointment. He agreed and we returned to teach him.

Patrick later told me just before his baptism that we were the first set of Mormon missionaries that he had allowed to come in and talk to him. He said that many elders had knocked on his door throughout his life, but he did not see a reason to let them in.  He said when he saw us, his heart was touched and he knew that he needed to talk to us. So he heeded the prompting and he has now been a member of the Church for over a year.

Around six months ago Patrick was instrumental in teaching and converting his uncle Ohenaba, who was visiting from Ghana where he is a prominent prince of the Ashanti Tribe.  After his uncle’s baptism, Patrick told me, “Elder Doman, I will have a baptism a month!”

He has met his goal.

Since becoming a member of the Church, Patrick has helped four of his friends enter the waters of baptism, as well as Ohenaba, who returned to Ghana where he has brought more than eight others into the gospel. On September 20th, Patrick’s wife and his five children were all baptized into the Church.

Because of this one man we met one afternoon, now 18 people have been baptized into the Church!  And the numbers continue to grow!