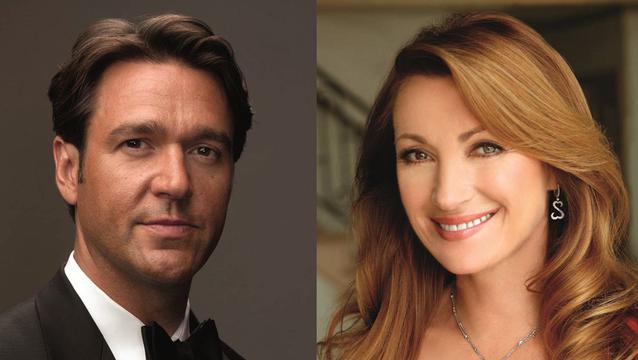 The concerts will be presented in the Conference Center in downtown Salt Lake City on Thursday, 15 December, Friday, 16 December, and Saturday, 17 December. All the evening concerts begin at 8 p.m. The weekly half-hour CBS radio broadcast of Music and the Spoken Word on Sunday, 18 December, at 9:30 a.m. in the Conference Center will also feature Gunn and Seymour. The broadcast will be followed by a mini-concert featuring additional music from the previous performances.

Recognized as one of the most exciting and in-demand baritones of the day, Gunn has appeared in the most renowned opera houses across the U.S. and Europe, including the Metropolitan Opera, the San Francisco Opera, the Paris Opera and the Madrid Opera.

Seymour has showcased her diverse talents on the Broadway stage, in motion pictures and on television. Her long list of film credits includes the James Bond movie Live and Let Die and the romantic classic Somewhere in Time. She also played the role of Dr. Michaela Quinn on television’s Dr. Quinn, Medicine Woman for six seasons. Seymour’s appearances in television movies and miniseries have earned her an Emmy Award and two Golden Globes.

In addition to acting, Ms. Seymour has written several books, including Open Hearts, Making Yourself at Home and This One ‘N That One, a series of children’s books written with her husband, James Keach, which are now being made into an animated series.

“Each year we have the good fortune to work with guest artists of exceptional caliber and this year is no exception,” said Mack Wilberg, music director of the Mormon Tabernacle Choir. “Nathan Gunn is a versatile performer who has played leading roles at the Metropolitan Opera, at Carnegie Hall and the Broadway musicals as well. He has sung with the Choir before and our audience will be pleased to get to know him better.”

Wilberg went on to say, “Jane Seymour as our narrator will delight our audiences as she has done for years on TV and the screen. We look forward to having them both here in December.”

“It’s hard to imagine but each year these Christmas concerts just keep getting better and better,” added Choir President Mac Christensen.  When you combine the genius of Mack Wilberg with the talent of guests like Nathan Gunn and Jane Seymour, you’re in store for a magnificent set of concerts. Together with the Choir, the Orchestra, the Bells and our Christmas dancers, you have an event unlike any other.  We are blessed to share it with our community and the world every year.”

Free tickets for these concerts and the Music and the Spoken Word broadcast are required. Because of very high demand for tickets to this event in past years, tickets are distributed through a random selection process.

Standby tickets for those without tickets will not be issued. However, patrons are invited to stand by for last-minute seating each evening and on Sunday morning for the Music and the Spoken Word broadcast. The standby line will form at the North Gate on Temple Square at 6 p.m. for the evening performances and at 7:30 a.m. for the Sunday broadcast.

The doors of the Conference Center will open 90 minutes before each concert. The length of the evening performance will be approximately 90 minutes. The broadcast and mini-concert on Sunday should last roughly an hour. Seating is limited to those 8 years of age and older.Given the increase in traffic due to other scheduled downtown holiday events, guests are asked to allow extra time for travel and parking in order to be seated not later than 30 minutes before the performance begins. Recommended parking locations for the ticket household address will be included with the mailed tickets.