SALT LAKE CITY – The Church of Jesus Christ of Latter-day Saints continues to build new temples across the globe to meet the needs of an expanding worldwide membership.

Saturday, the president of The Church of Jesus Christ of Latter-day Saints announced six new temples during the morning session of the faith’s 181st Semiannual General Conference.

President Thomas S. Monson said the Church will build temples in Paris, France; Kinshasa, Democratic Republic of Congo; Durban, South Africa; Barranquilla, Colombia and Star Valley, Wyoming. The Church will also rebuild the historic Provo, Utah Tabernacle –which was heavily damaged by fire in December 2010 – and convert it into a temple.

Exact locations of the temples in Paris, Africa, Colombia and Wyoming will be announced at a later date. 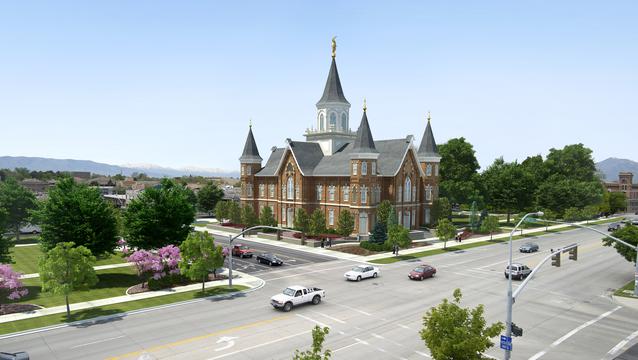 The converted Provo Tabernacle will become the second temple in Provo and the sixteenth in the state. The tabernacle was originally constructed from 1883 to 1898. It is located on University Avenue between Center Street and 100 South.

Historically, the tabernacle was used for church meetings and cultural events. Since the 2010 fire, Church leaders have worked with architects, engineers and historical experts to determine the future of the building.  The project will include a complete restoration of the original exterior. To facilitate these plans the Church has recently acquired additional property near the tabernacle.

This will be the second time the Church has converted an historic tabernacle into a temple. The Vernal Utah Temple, which was dedicated in 1997, was constructed within the brick exterior of the 1907 Uintah Stake Tabernacle.

The Paris Temple will be the first in this European country. Mormon missionaries arrived in France in 1849. The closest temples to French members are in Frankfurt, Germany, The Hague, Netherlands and Bern, Switzerland.

The Kinshasa (Democratic Republic of Congo) and Durban (South Africa) temples will be the fourth and fifth on the African continent. The first three were built in Johannesburg, South Africa in 1985, Accra, Ghana in 2004 and Aba, Nigeria in 2005.

The Kinshasa temple will serve 23,000 members in nine stakes and districts. Currently, the nearest temple for members is approximately 2,100 miles away in Johannesburg, a long journey made more difficult by a lack of dependable public transportation.

There are 55,000 Church members in South Africa. The first missionaries arrived in the country in 1853.

Colombia will now have two temples with the addition of Barranquilla. The first was dedicated in Bogota in 1999. The new temple will serve 45,000 members in 15 stakes and districts in Colombia and Venezuela.

The first missionaries arrived in the Latin-American nation in 1966. Today there are now more than 173,000 Latter-day Saints in the country.

The new temple in Star Valley will serve members living in western Wyoming, who now travel approximately 1.5 hours to Idaho Falls and Rexburg, Idaho for temple services.  It is a journey made more difficult during the winter.

Members of The Church of Jesus Christ of Latter-day Saints consider temples to be the “house of the Lord,” the most sacred places on earth. Unlike meetinghouses, where Sabbath worship and weekly activities take place, temples are open throughout the week and closed on Sundays.

There are currently 135 operating temples worldwide and, with today’s announcement, 31 temples announced or under construction.