The Church of Jesus Christ of Latter-day Saints (Mormon) continues to help in the effort to rebuild Japan since March’s devastating earthquake and tsunami. Two recent efforts include the donation of a new industrial size ice maker to fishermen in a small village near Sendai, and the restoration of a Shinto shrine in Tagajo. 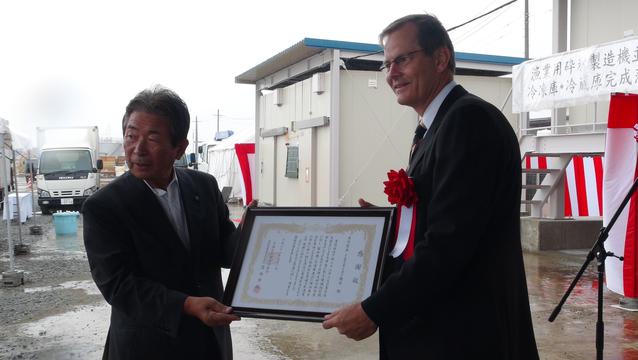 A ribbon cutting ceremony for the new ice machine was held 1 September. The 11 March tsunami destroyed all but one of 84 fishing boats in a local fishing cooperative. Although some boats were repaired, the fishermen were beached without ice to preserve the daily catch.

“Now we can go back to work and feed our families,” a local fisherman said.

Elder Masahisa Watabe of Alpine, Utah, discovered the fishing village’s need shortly after the tsunami. Elder Watabe, a senior missionary serving with his wife in Tokyo, was born and raised in Sendai, but had not returned for many years. When he returned to help rebuild, he met a prominent friend in the community and learned about the fishermen. The Church went into action on 15 June as Presiding Bishop H. David Burton visited Japan to announce the gift to the local fishing co-op — an ice maker, a cold-storage unit and three refrigerated trucks.

The ice machine is capable of making 3.3 tons of ice a day. Prefectural Fishing Cooperative President Shinetsu Kikuchi called the gift “a large step for people in the fishing industry” as he presented a plaque of appreciation to the Church.

Priests at Meiji Shrine in Tokyo — a landmark comparable to the National Cathedral in Washington, D.C. — recently invited Church leaders to describe how the Church conducts its humanitarian efforts around the world.

The invitation from Meiji Shrine priests came following a service project by 80 Latter-day Saint missionaries at the Yawata Shrine in Tagajo, just outside Sendai. Missionaries from the Church’s Tokyo mission rode a bus all night to spend the next day clearing out debris and salvaging the shrine’s treasures. The Yawata Shrine is hundreds of years old and is designated as a Historical Legacy Site in Japan.

The tsunami flooded the Yawata Shrine, washed cars into the grounds and scattered and destroyed sacred artifacts. When Moriyasu Ito, a Meiji priest who studied at BYU, saw pictures of the service project in Tagajo, he was overwhelmed and contacted the Church, which has a long-standing relationship with Meiji.

“Even we have not done anything to help the shrines in Tohoku,” said Ito, who has responsibility for international affairs at the shrine. “We want to know why the Mormons have done this.”

At the presentation in front of 50 Meiji priests and employees, Ito gave a detailed introduction of the Church and showed a video of the missionaries working at Yawata. The Church’s local public affairs representatives explained the Church’s global relief efforts and the extensive contributions made in Japan, which include large cash donations, supplies of gasoline, food, water, blankets, clothing, hygiene kits and large pieces of equipment, such as the aforementioned ice-making and storage facilities for fishermen. The Church has sent more than 18,000 volunteers who have given approximately 160,000 hours of service in the disaster zone.